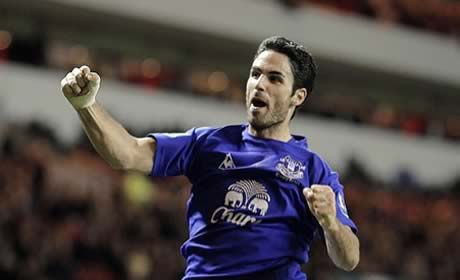 Arsenal’s new signing Mikel Arteta says the lure of a new challenge at Arsenal, and Champions League football, was too great to turn down, but has thanked Everton FC and its fans for the time he spent at the Merseyside club.

Speaking to Everton TV, Arteta said, “It is a big opportunity for me and my family and I think it is the right time for me to take it. It is a big challenge, a different challenge, fresh for me and I want to see myself on the biggest stage, the Champions League.

“I am 29 years old so I haven’t got much time left to take a chance like this one.

And on his time at Everton, he said, “I think I have done my best for Everton. I always try hard, I have been as professional as I could and I was grateful for the support and the love that the club and the fans showed me.

“It is very difficult to say goodbye. Obviously I am never going to forget what I have done here and what the people and this club have done for me.”

The Spaniard will add some depth and quality to an Arsenal midfield which has plenty of potential but lacks experience after the departure of Cesc Fabregas.

i think he is quite good at centre back too.

your not funny prick

we bought a cb you fucking cunt

chill man, the CB is always going to be a running joke, we have 5 of em and only 2 that are good enough so

That photo is so homo it’s NSFW. Just saying…

Get t’fuck Interlull. We wanna see these lads in action.

Benayorn with Israel National Team
Her Merte with Germany wth National Team
Arteta is moving house to London…well househunting..not part of Spain NT
Andre is also moving.. Turkey to London…currently in the gym as per his tweets
South Park 9 I am unsure where he is.. Monaco or London.

South Park 9 is with me Maddo, he’s up some scaffolding at the mo but says Hi.

The working man Cesc Fabregas.
Please dont get injured, thats all I ask.
Welcome to the Arsenal.

I think Arsenal will find that Arteta is coming up to his 30th birthday and is not the player he was since his bad injuries. I wish him all the best and now we might see Everton play some good Attacking football instead of sideways. Cahill next i hope because he is finished as well.

Felliani, Barkley, Rodwell. Billy and Drenthe should be a bit better .

Hope we Also sell jags in the summer because he is hopeless with the ball.

YOU ARE NOT BITTER….THEN. He was your player and gave you pleasure on the field with his style of play.. be happy for him.

Good luck without him John. I would much rather have him, so thanks.

Please.. Cahill gets better with age. I’m Aussie and I hadn’t even heard of him until he was 24 and wasn’t even in our (very average at the time) national team.
Arteta is 29. Ryan Giggs is 37, Lampard 34, Riquelme 35 etc. Plenty of good years left.

Kenwright's back pocket
Reply to  John

My wife thanks you for her new Diamante earrings and upcoming fortnight in the Seychelles.

That good for nothing club is certainly not seeeing a penny of the Mikel money!

I wish Nik B stayed.

Hopefully we will tear Swansea a new one.

John, this isn’t a blog for everton fans so do one!

I actually clicked a link from the Arseblog a few days ago which took me to an Everton Blog with their fans slagging us off saying we should get fucked and don’t have a chance getting any of their players……..ouch!

Evertonians are notorious for being the moaniest cunts in the UK so not really surprised that theyre being found on the hallowed ground of Arseblog trying to cry to anyone that will listen.

Welcome Mikel and Yossi and bring on the Vermertersack!!!

Sad to see Arteta go. Was a great player for Everton but the money was too good to turn down.

Happy for the lad, but he’s been a shadow of his former self from 1-2 years ago. Massive gamble from Arsenal imo.

HAHAHA stfu with that already 😀

how long before Barcelona start whining about his DNA?

There is a story that Arteta has had to take a pay cut to join us from Everton, a club which is pretty much skint. So now he is getting similar pay to what Denilson and Bendtner were getting.

No wonder we find it so difficult to sign anyone. Shameful.

Sorry but if somebody wants to play for you then why should you have to pay them more than 60K?

If arsenal can get their wage bill down then perhaps we can all afford to go watch a few more games!

I would assume he took a pay cut because we gave a 29-year-old a FOUR (4) year contract. Less money now, but more money than he would expect as a 32-year-old on the very tail end of his career.

zeb
Reply to  Gooner In Red

L O L brilliant, this made my day, its similar to the park ji sung song at manu, but its brilliant nevertheless

GoonerMonkey
Reply to  Gooner In Red

Mega LOLz as them kids say that wot don the riots. Will be singing this the first time he comes on. Haha!

coolarse
Reply to  Gooner In Red

JohnDale
Reply to  Gunner get ya

Yeah, i saw that yesterday and couldn’t stop laughing. If there is one thing i know for sure, it’s that Jack a true gooner. He will do anything to spite Sp*rs. Lol

Id love it if Mikel scored on his debut, pulled his shirt over his head to reveal a T Shirt say ‘Na$ri is a cunt’.

would luv that!! Bwahahahaha! wat a cunt!

vox in Oz
Reply to  Earl of Cunt-erbury

Get a fuckin flag one of those fuckers that cover the North Bank with $$$CUNT$$$ written on it when Mancunty City come to the emirates!! …

Jack loves Arsenal. True gooner and a future captain. He and Frimpong are ardent fans, they will do anything to ensure we win.

I think we have done well in the window… welcome boys. The defence is gonna be one of the very best in the league with the two new lads… centre backs will be phenominal together… Santos, Mers.Verm.Sagna… looks fuckin good. Especially if Santos is as good on the wing as i hear. Rekindle that left flank with Rambo. I think we need to stop comparing or referring Arteta as the Cesc replacement. He will be very different. I would ve liked to see someone pacier??? But I think he’ll slide into the team seamlessly and rekindle that old form with… Read more »

The fact is the money was there to buy mata who has hit the ground running for chelsea such is his quality, I doubt he wouldnt have come for the 25 odd million chelsea paid and fabregas’ wages but we, yet again stuck stringently to our transfer policy i can only hope that our inability to pay over £18m for any player, even when the money is there to invest a wafer thin squad, will not affect our champions league status. arteta could be a good buy then again he’s past his peak and will most probably only get worse.… Read more »

always fun to see how intelect has decided to dodge certain people… UL m8… My condolences.

Kenwright's back pocket
Reply to  EugeneTheFifth

Come on, you’ve got school on Monday…

I don’t normally comment on here but i have to say people are being ridiculous. question asked was why couldn’t we afford.yo.match the wages of a club like everton who are virtually bankrupt… the overinflated wages are pattering of the reason they are nearly bankrupt. quality experienced players brought in throughout the spine of the team. premier league experience. height. what more do you lot want?!

Kenwright's back pocket
Reply to  Ben

Out of the 5 I think I am most excited about the new Left Back, Also going to be interested who wenger picks out of the 3 CBs, Vermy/Kos have been doing good together.
Merte/Vermy, or Merte/Kos, Verm is vice captain, so I am sure he wont get dropped.

[…] says the lure of Champions League football was too much to turn down at this stage of his career. He says: It has been crazy. I can’t believe what happened, and the way it happened, but that is part […]

Typical profitting of the transfer window, but no matter, the season truly starts now. | Being Arsenal FC Bystander

[…] Speaking of new signings, Arteta has spoken of his reason for joining Arsenal, and said: […]

[…] says the lure of Champions League football was too much to turn down at this stage of his career. He says: It has been crazy. I can’t believe what happened, and the way it happened, but that is part […]