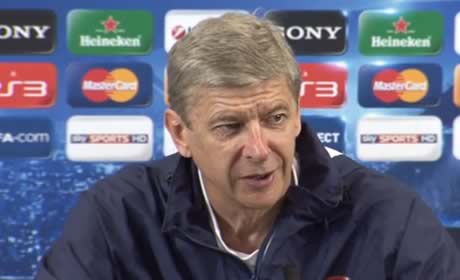 Arsene Wenger says that Jack Wilshere’s current injury problems stem from an ankle fracture he had before he made his breakthrough into Arsenal’s first team.

The manager was quizzed about whether or not the amount of games Jack played last season had any influence on his current situation.

“Jack had an early fracture at the age of 16 that healed and around that he created another opening. Is it down to a kick, is it down to playing too much? I don’t know, I am not a specialist, but that is unfortunately what happened.

“He said to me he first felt it playing against Switzerland”, he said, referring to England’s game in June. Wilshere limped out of the Emirates Cup and hasn’t played since, but the Arsenal manager has given his backing to the medical staff at the club.

The amount of injuries we have has led many to believe the club outsourced the care of the players to The Shipman-Kevorkian Medicare Corporation, but Arsene says the club did everything right.

“It’s unfair because the club medical staff haven’t made any mistakes on that front”, he said. “It is unfortunate and we are all very sad at the club that it has happened to such a young boy.

“During the period in the protective boot, the fracture he had didn’t heal. Once that was clear, what I’ve been told is that we had to go in quite quickly to repair it and that’s why we decided to do it so quickly”.

He was confident that despite Wilshere’s absence being something of a blow, that the other midfielders at the club could fill the gap.

“It makes us a bit shorter in midfield and it puts more pressure on our midfielders to perform game in, game out because there is less rotation possibility. Every club can be tested on that front and so that shouldn’t impact our result at the end of the season and shouldn’t be any excuse at all.

“He can come back as well and be very strong and help us to finish the season well”.

Should we blame the medical staff or the training regimen? After all most of the injuries stem from conditioning problems. Maybe the training system should change

Everything one reads — well, the piece on Stojkovic earlier today, at least — suggests that Wenger players do more training with the ball to improve technique and less raw conditioning work than players under other coaches, but that Wenger’s technical drills along with dietary regimes &c are sufficient to get the players to the necessary level of fitness. Given the injuries and how the team seems to run out of steam towards the end of every season, maybe you are right that the training system needs to be looked at again. Given, also, AW’s self-proclaimed 32-years as a coach,… Read more »

Hmm..for the first 8 or 9 seasons under Wenger(with the exception of 02/03), Arsenal typically finished the seasons very strong. The recent trend of collapsing toward the end really started in 2007. Probably doesn’t mean anything, but it would be interesting to know if something changed in our training system around that time.

I think he was always going to be out for this period of time, and the club have trickled the news to the press so we wouldnt look so desperate in the transfer window. If you knew Jack would be injured for 7 months when the window was open, would you not cry out for another top class central midfielder??

I’m not so sure about this. All of Jack’s tweets prior to this operation were positive.

I think we are cursed.

I am disgusted to hear people thinking that the medical team or any staff at Arsenal is not up to par. We are a world class club why on God’s green Earth would we have any less than the best? People get injured its a reality. We have smaller more technically gifted players in one of the most, if not the most, physical league in the world.

Plev
Reply to  Save 75 cents

A-League is more physical.. but that’s probably down to the noticeable gap in quality. Just sayin..

Wasn’t Jack’s injury originally said to be a bone spur? But the surgery has been to repair a hairline fracture. I can understand how an earlier fracture could lead to a bone spur, and that would cause pain, but if there was a new fracture as well, shouldn’t it have been spotted at the time. And if it was, and as Jack was put in a protective boot, it may have been, why wasn’t that then said to be the cause of the injury? The more we learn about all these long-term injuries at the club, the more the last-minute… Read more »

Happened against Switzerland – that was when he was hacked down by Djourou for England’s penalty. Nice one Johan!

just think lads, we are gettin a new signning in december, jackies back whoop!!

Is it just me or does anybody else smell a rat? If Jack was injured all the way back in July then why the fuck off has he only just had an operation? What the fuck have those useless “medical staff” being doing for two months?

Or maybe they knew back then that he was a long-term casualty but didn’t want to spend the money on a replacement.

I agree with your last line.

These injuries are sooo fucking boring

[…] criticism as another apparently short-term injury has Vermaelened itself into something longer, but Arsene says: It’s unfair because the club medical staff haven’t made any mistakes on that front. During the […]

[…] as the youngster has undergone surgery, and might return at the earliest in February.Le Boss has clarified that the injury was incurred during international duty, blasted international […]