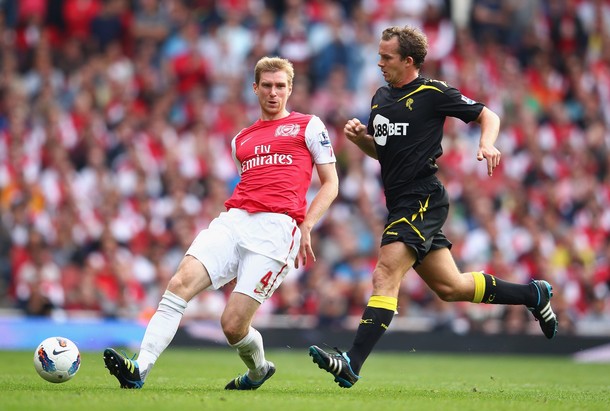 Lovely big German centre-back Per Mertesacker believes the hard work put in on the training ground is starting to pay dividends for Arsene Wenger’s defence.

The Gunners may have conceded 14 goals in the league this season, but having achieved two clean sheets in three games with the Teutonic stopper in the side, the seeds of improvement appear to be sprouting shoots of improvement (ish).

Speaking in the aftermath of Saturday’s win against Bolton, the deadline day acquisition told Arsenal Player:

“We had a little bit more time [during the week] because of the Carling Cup match.

“Some players had a little more rest and we trained a little harder, especially on the way we want to defend. It worked and on Saturday you saw we had a better defence. We were closer together.

“After the four goals against Blackburn we lost a little bit of confidence but we were very proud of our performance on Saturday. We want to go on with this way of defending.

“I want to do a good job, especially in the defence. That is my role. If the coach praises me then that is a great thing but I have to go on and keep on working. My performances can improve.”

This may be completely wrong, and thus not particularly fitting for a ‘news’ site, but I’m pretty sure Arsenal have the most clean sheets in the Premier League this season (3), while also having conceded the second most goals (14), only Bolton having fared worse. I think that nicely sums up the rollercoaster ride we’re on.

What’s not appropriate is making comments about how our defending has improved after this start to the season. Keeping a clean sheet now and again doesn’t mean you’ve turned a corner. Every team does it, even the ones who get relegated.

To be fair, he was being asked direct questions by the official site. He didn’t just decide to talk about it.

Of course it’s all stage managed by the club PR, I’m not having at go at ‘sacker, I just think some of us find hearing about ‘improvements’ and ‘hard work’ in defence following one clean sheet a bit rich after what they’ve put us through for several seasons now i.e. a continually declining, neglected defence. Better to say nothing, a recent history littered with false dawns would suggest .

Martin Keown is my hero
Reply to  arseblog

Going by the stats at the end of that lets hope we win 9-8 on wednesday to ensure a clean sheet at the spuds. . . .

I think Per’s arrival was a big big plus for the club, and I think his analysis is correct – the more the defence works together, the better the performances will be. They are coming into their stride, and we have a great goalkeeper behind them too.

The following teams all have three clean sheets:

Make of that what you will.

PERsonally, I have no problem with what Mertesacker said and won’t get drawn on nit-picking his statement. The point he made is that the team have been putting in extra work defensively, that they are very happy about the clean sheet against Bolton, and that their goal is to get better defensively. If you feel the need to analyze every word that comes out of his non-native-English speaking mouth, well, have at it.

The only Sam is Nelson

Point taken Per but let’s just see what happens on Sunday. No corner has been turned until we get a result at the spuds. They may well be working hard defensively but I don’t think it will make any difference. We only have 1 good CB and he’s injured. Without him we have the defence of a championship side and not a very good 1 at that. Couldn’t help but laugh at Traores exploits for QPR at the weekend.

“No corner has been turned until we get a result at the spuds”
W e hve a game before tht one… small steps my friends.. small steps..

most clean sheets, really? newcastle, swansea, bolton…right? what about the other teams, wow that really is an interesting stat all things considered. now i wanna see mertesacker get his freaking HEAD on a corner and send it into the back of the net like a damn bullet

nvm 7amkickoff answered it already haha, 6 teams then…man city are no surprise being in there, chelsea are notable absentees however as they were both tied for best defence last year i think, in terms of least goals conceded

I really do wonder if most of the Arses on here actually watch the games… Reading the comments from the peanut gallery, one gets the impression that the vast majority get their match day highlights & news from match of the day & sky sports… That’s why they all sound like they have a case of the Hansen’s… I recognize that we are in the shite, however, it’s the board & manager who have to answer for that and they should be held accountable. The team is not changing at least until the January window & we can either get… Read more »

Just a quick note I want him to drive the defence in the absence of Vermy and are the fuckwitts at the FA going to ban Vincent Kompany for the stamping in the same way they did with Song ?

Tevez on the bench how funny is that

That’s not as funny as Mancini claiming they lack midfielders, considering Tevez can operate in the hole as an AMC.

Why Van Persie should be captain. | Being Arsenal FC Bystander

[…] such is the fragile state of our defense that every clean sheet has to be glorised. Mertesacker has said he believes that training is starting to pay off dividend, and Bystander says to put a run of clean sheets before talking about any results. It’s funny […]

Manbearpig (great name) But agree with u completely. Everything that matters is dealt with on the pitch. 24 hours media is turning our love for the club into an insatiable thirst for news- good or bad, real or fake. 2 bob mugs (Durham and the cricketer) give their opinion. All of a sudden we’ll be upset then next week they’ll call us fickle for wanting a change. Truth is, it’s pain that makes success taste so sweet. So let’s soak it up- arsenal style, backs to the wall, siege mentality, and when lady luck smiles on us again you’ll catch… Read more »

To many fickle fans these days who only look out for a result or catch highlights on tv, football is about getting behind the players and the manager all together through good times and bad, it strikes me as odd how many more arses there are after we lose than when we win! Get behind the team and remember why you love Arsenal, a great club with good ethics that’s helped shape the way football is played today oh and remember it could always be worse you could be a spurs fan!

Didn’t watch the game; did Per had an excellent game?

In my opinion he did, and although I’ll probably get shot down for this, and despite the mistakes, I think mertersacker and kos are showing promising signs of forming a solid partnership

Martin Keown is my hero

Right then…..all you righteous fuckers……I expect never to hear a word of criticism directed at an Arsenal player from you ever again.

Your unwillingness to tell it how it is, is similar to the malaise we often suffer on the pitch, i.e. no player will bollock the others and tell them to get their act together. And so the indifference on the pitch goes on………….

If we look objectively at all the games we’ve played,won,lost or drawn since the start of the season, and remove the OT debacle, which we can all agree was an aberration and not the exception that proves the rule, here is what we can safely say: 1) Kos and Mertesacker are starting to make a good pairing and will only improve as they get to work together. 2)Szcesny will usually correct any errors our CB’s make and he is starting to become a giant in the goalkeeping community. 3) We are lacking the Verminator and Wilshere in our defensive setup… Read more »

[…] BFG (Big Friendly German), says Saturday’s defensive display against Bolton, was down to some extra work on the training ground: We trained a little harder, especially on the way we want to defend. It worked and on Saturday you […]

Sensible indeed, Romford and Weedonald good to have you on-board. All you fake arses shut the fuck up and support the TEAM ‘DAMN IT’!