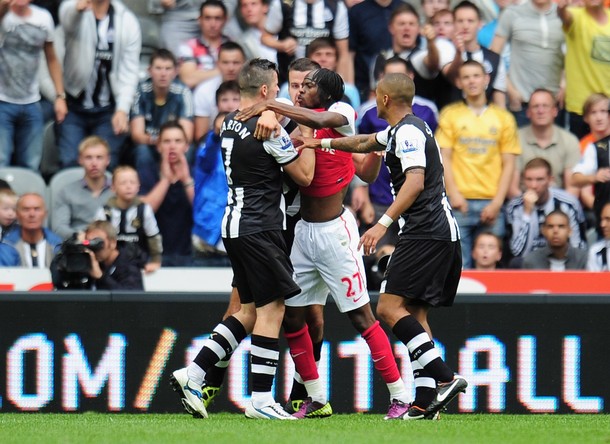 When he’s not feigning an understanding of 19th-century classical philology, putting out cigars in the face of teenagers, knocking out teammates, beating up schoolboys, assaulting strangers, sitting in jail or sparking mass brawls, part-time footballer and full-time yob Joseph Anthony Barton spends the rest of his time apparently living in dreamland.

Speaking to the BBC, the Premier League’s finest example of ‘angry little man syndrome‘ has claimed that Arsenal were close to signing him this summer before his prickish behaviour against the Gunners put an end to Arsene Wenger’s ‘alleged’ interest.

Playing for Newcastle United in the first game of the season, the midfielder embroiled himself in several spats with Arsenal players before earning Gervinho and Alex Song a combined six game ban by provoking reactions with his moronic anger.

Reflecting on his behaviour and his subsequent move to newly promoted side Queens Park Rangers, the 29-year-old stated:

“If I hadn’t played against Arsenal on the first day, I may have signed for them.

“There were a couple of conversations [with Arsene Wenger] but that’s different to actually signing.

“The Gervinho incident happened and there’s nothing I can do about it now. If it happened again, I’d like to think I’d deal with it differently.

“Things happen for a reason and there’s a lesson to be learned from it. Right now we sit above Arsenal in the table – hopefully that’s the case in May.”

Arseblog News breathes a huge sigh of relief that such a horrible specimen will never be seen wearing an Arsenal shirt. We believe we aren’t the only ones, judging by this video.

Hey Joey? What’s the Nietzschien for ‘close, but no cigar’?

Aint no body biggger than Nasri in Cunterism. Not even that skunk. **read Barton**

Joey Barton, what an utter cunt. He tries to show the “educated” side to himself by tweeting crap but using words far too big and complicated for his tiny brain to fathom. Come on Cunty, sorry, Joey; we all know you got someone else to pen those words for you. Stick to what you know best you prick, i.e. outright thuggery of the highest order. IN ARSEBLOG WE TRUST! LONG LIVE THE BEST EVER BLOG!

He is a better person than Na$ri.

chris
Reply to  Bob the Gunner

If he’d had signed I would have returned my ST in a heartbeat.

And as for the idiots claiming this guy is better than Na$ri, idiots.
Nasri left for money and trophies, they way he did it was wrong but thats besides the point. Barton is an angry little cunt who should be in prison, just look at the 1st paragraph of this article for why. It’s no contest.

If he thinks he’s all that, and he obviously has severe aggression issues, pack him off to Afghanistan. Let’s see how tough the cunt is then.

Might explain why all our players were hugs and smiles with him after the Newcastle game, maybe they knew Wenger had been talking to him about signing for us.

Would have been a great signing, provides something we’ve been missing this season. Also, its wrong to be calling him a thug. Sure he’s made some big mistakes (huge) but he’s matured and moved on since. Can’t keep judging a person on past mistakes

Get a life.Barton is an accident waiting
to happen.He is a nasty scumbag
looking to make a meal of any tackle
made on him but having sly kicks
on the blind side.
He is a good football player who
no one in their right mind will
employ.
Step up Warnock.A man with previous
for enjoying a challenge to work with
nasty players like JB.
Could be an interesting season

you can’t really say he’s matured, he’s had like a month of not making a headline, that’s not a long time. he’ll be back in the papers for the wrong reasons in a few weeks

A word that’s foul, repulsive and abusive enough, to describe this thing named Barton, has yet to be invented. He transcends cuntishness.

OMG!!! From what spastic mong-faced cunt Barton says, his non-transfer means that we have missed out the chance on a top 4 spot!!!

What’s the bet Barton turns up in a dumpster in ten years time with I bullet hole in his head after pissing off the wrong person. He’s a self promoting odious cretin. I would forgive for Aaron if he snapped his leg in two.

We can only hope….

buy an iphone they are better than iphobe

Even better, don’t buy one at all. Giving more money to Apple is like paying for Sky Sports…it makes a person feel dirty and used….which brings us back to Barton’s string of man – friends in chokey……

Seems we decided our disciplinary record was bad enough without having that shit stain in the side…….

Come on lay off the guy. He’s a good player, would have been a great signing. Sure he’s made mistakes but thats in the past. He hasn’t done anything “thuggish” for a while. Not exactly changed but can’t keeping judging someone on past mistakes.

Come on Joey, we all know that’s you masquerading as “Man”, which is all you have ever done come to think of it……….

Yeah that guy who stubbed a cigar in my mum’s eye is also an alright bloke, he hasn’t done anything bad for the months he has been in jail.

I have just composed a song for Joey to Bon Jovi’s ‘you give love a bad name’.

Kicked in the head
And your to blame
You give cunts, a bad name.

Joey used to play like a cock
Then he went on strike
Moved to QPR
It’s tough….
SO tough….

Ha Ha! Quality! Jon Bon Jovi would be so proud of both of those……

I’m not so sure you would.

Sorry I take that back.

Look at his wikipedia page, under honours someone is obviously having a laugh.

Lol that is hilarious if he did say those things!
If there’s 1 thing I can guarantee regardless of how shite we might be at the moment, ‘we will finish above both ‘Newcastle & QPR’
Which in all honesty Is nothing to brag about but it’s still a fact!

Actually Arsenal could use his steel even with his baggage- the guy definitely has issues but he’s the type that wouldn’t let Stoke etc. Run over as in years past….. Just saying

At least he would have snapped shawcross’s or taylor’s legs in retaliation …. Could use that

But he might stub out a Lambert & Butler on Oxlade’s chin groove….don’t need that.

[…] In other news, headline of the day from Arseblog News: Thug claims being thuggish stopped move. Rejoice […]

He’s an idiot and I’m no fan of his, but he would definitely add something to this team. A little English terrier barking in the midfield would not do this team any harm. We’ve had assholes on the team before and even worse, we even let one big French ex Chelsea cunt captain the side! On the flip side, for all the good Barton could possibly do for this team, he would probably cancel it out with a bunch of stupid red cards for stupid ass things. If we’re still struggling by the end of the year, we should pick… Read more »

I think he needs to be neutered. They do it to dogs and they calm down quite a lot. He’s of about the same level of intelligence, only with his dexterity he can copy and paste quotes from philosophy websites to make him look intelligent.

Joey for the snip!

I shudder at the thought of Joey Barton nearly joining Arsenal, and moan at another player injury. | Being Arsenal FC Bystander

[…] Barton said he was so close to joining Arsenal, I shuddered at that thought. Apparently Arsene was talking to the players regarding a move, but […]

All that philosophical thinking … all those books …

… and the best he can come up with is ‘things happen for a reason’?

He’s not as stupid as he acts, but he’s not as clever as he thinks. He seems to be a habitual criminal. He re-offends on a regular basis. He is apparently unable to face the truth about himself, though he clearly understands the importance of having a good lawyer and showing the proper level of remorse prior to sentencing, and he always spouts the right words between court cases… “I have learned. I am a changed man. That last bastard I blinded deserved it and screamed like a girl, but I wouldn’t do it now of course”. He is an… Read more »

Nasri is a cunt. Thats for sure

I wish we have signed him. He is a good player

Thank God for Barton. If he hadn’t provoked Song and Gervinho we wld have appeared strong enough for the season and Wenger’s chequebook would still have been dusty. Plus, dont ya all think we need someone like him? Make other teams get a red card (or two) and we win, or gets himself a redcard and we have someone to blame. We are running short of scapegoats, lets get Barton aboard plsssssss.

Fucking thug beating up little boys, a bully shit himself when asked down the tunnel by etuhu last season

[…] seen himself embroiled in an opening day scuffle with Joey Barton which led to a red card on his Premier League debut, Gervinho made clear that he was not dwelling […]