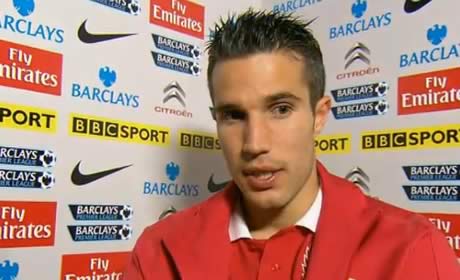 Robin van Persie says he had been thinking about his 100 Arsenal goal milestone for some time before it happened.

Speaking to the BBC after the game, the Arsenal skipper said, “It makes me very proud, I’m number 17 in Arsenal’s history to score 100 goals, which is a big achievement.

“I started thinking about it when I scored my 82nd, my 83rd goal, I was looking ahead and thinking ‘Oh, this might be possible’. So today’s the day and it makes me proud.”

Today’s match ball will be added to Robin’s memento collection. “I went straight to the ref and asked him, and he said, ‘of course’. The ball will get a nice place in my living room”.

And while the fans have been full of praise for van Persie’s scoring form, the captain was equally fulsome in his praise of the fans.

“The fans were amazing again. Of course for them it’s a hard time, like for us, but I think everyone’s dealing well with the situation. We got a good win, three goals, so hopefully we can look forward with this result.

“It’s good to get a good win, we could maybe have scored 5 or 6 today but we have a big game on Wednesday, and then a massive one on Sunday. Everyone is looking forward to it, everyone is pleased, some smiles again, and that’s what we want, no?”

Without being greedy what I really want is for Robin to reach 110 goals by next Sunday at 6pm, having scored a match winning hat-trick in midweek against Olympiacos.

That’s what we really want, but for now, Robin’s 100 will do just fine.

This was very old a very long time ago.

Concurs. Move on sir, move on.

I am deleting most of those comments now

Quite rightly he should be proud, as we should all be of him, its a great achievement and considering his injuries in the past, the more impressive for it. He is in such a great vein of form and is slowly developing into an other ‘Mr Arsenal’. 110 by the close of play next Sunday sounds perfect Blogs.

But impressed with Arteta today.

the king is dead

congrats to rvp, especially for standing up to 5 (five) bolton players on your own! where the hell were his ‘team mates’?! lots to improve in the team ethos dept me thinks.

gunnie
Reply to  the king is dead

RVP – Even as a young kid he wanted to play for Arsenal…Watching the clip below gives me goose bumps…I love this guy
http://www.youtube.com/watch?v=ZHLsP7kmq5A&feature

Wow, even as a kid he curled a dead ball as good as Beckham and Roberto Carlos…A natural striker but I like the way he described himself as a shadow striker…If he stays fit, he could eclipse Van Basten’s achievements

Okay, comparing him to van Basten is way, way over the top. Van Basten is one of the greatest strikers who ever lived.

I wish the “Nasri is a cunt” brigade would just fuck off and die!

I am amazed how the Guardian talks about our lack of unity. Every time there’s a great result we are put down by the media. Sorry but is there a larger story here that I am missing. And yes we should now let Nasri go. Remember the opposite of love is not hate, it’s indifference. He doesn’t matter to me anymore.

i hope they reissue the centurions DVD to include him alongside thierry and dennis.

A brilliant achievement and like someone pointed out he’s done this while being injured most of the time.

I hope we move heaven and earth to make sure we don’t lose him at the end of the season. Personally, I’m not optimistic.

Why Van Persie should be captain. | Being Arsenal FC Bystander

[…] seems to be the name of his game as well, with Van Persie acknowledging his amazing feat, but refusing to dwell on it. The skipper instead wants to focus on the next match, and bring another victory to Arsenal. Sure, […]