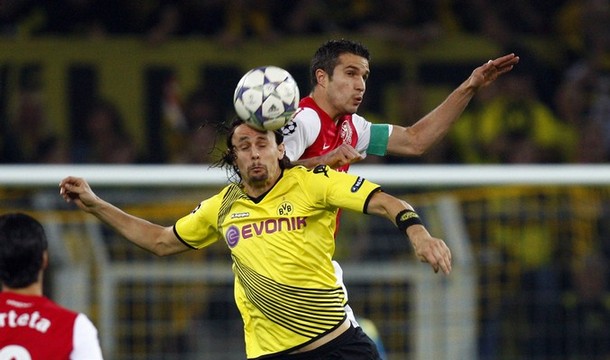 Arsene Wenger has confirmed that preliminary contract negotiations have begun with some of the club’s top players as they edge towards the final year of their current deals.

While a huge number Arsenal squad members, some since departed or on loan, have signed long-term deals in the past two years, the likes of club captain Robin van Persie, Theo Walcott and Alex Song will become free agents in two years.

Eager to avoid a repeat of the Samir Na$ri situation, the Frenchman admitted to assembled media that contact with player representatives had been made.

“Yes, this starts now. We will try to convince them. Our desire is there to do it and we are ready to sit down with them.

Somewhat more worrying, but relative to the circumstances in which Arsenal operate, Wenger also hinted that the financial muscle of other clubs meant that there was no certainty in sealing top players on long-term deals.

“After that we see where we go but the gap on that front has become bigger for us so, today, I cannot say that if we go to the maximum [deal] we are sure to sign a player – even if we do that we are not sure.”

Looking back at a summer in which he was left with little choice but to cash in on both Cesc Fabregas and Samir Nasri, the boss again lamented that the Spaniard was sold for less than market value, although the price for Nasri went some way to make up for that.

“I always said that Cesc was a bargain,” said Wenger. “We were forced into a situation because for me he is one of the best midfielders in the world and we knew that we would sell him under what he’s worth.

“With Nasri at least we got a reasonable price for a player with one year to go.”

this got anything to do with darren dein becoming RvP and Song’s agent?

And theo’s.. But no, this is to do with both Walcott and Van Persie openly saying that they don’t know what they’d do if Cesc left.

If we’re to become a club languishing outside of the top four with no desire shown by the powers that be to change that we will certainly see a player exodus.

Can’t see them signing I think this club is on it’s way down a long slippery slope :(:( I really hope I’m wrong :s

Failing to spend the transfer budget on decent players and preferring to buy those that appear cheap, while at the same time overpaying the shitter members of the squad, is going to guarantee that our best players leave and we can’t offload our worst players. That’s all down to Wenger, and ultimately he must be held accountable. He is paid £7M a year for a job that in the real (non-football) world would merit around £100-150K.

Spending money doesn’t guarantee success, it helps but there’s not a lot of value in the market, if there were obvious choices we would have made them, hazard wasn’t available, m’vila will end up at city or barca, were not dining at the top table, changing the manager won’t change that, Cahill is a decent centre half, but not worth anywhere near 17mill, as it stands were a feeder club who educate players so they can move on2 better thing, changing the manager won’t change that

VP will commit – he owes the club……hopefully he’ll instigate that they buy one or two absolutely top signings to bring the youngsters on.

I believe Theo wants to stay but might depend on his advisors, or whether he gets the chance to play up front. Otherwise he’s off to Liverpool; Chelsea or abroad!

Arshavin will go in Dec

Song will re-sign for $s

Arsene. Do. Whatever. It. Takes. To. Resign. Van Persie. Hookers, blow, I don’t care.

Do u think that any 1 would sign with this flop of stars.. Our beloved Arsenal is going down thanks to wenger..

I wouldn’t be so quick to blame Wenger instead I’d be looking at the great tool Ivan Gazidis. Now there’s a twat if ever I’ve seen one.

For all I care, Arsh and walcott can leave and then we get better players for van P, song and others

Fat lot of good signing long contracts does these days. Cesc was on a long contact so was Henry…then they left mid-contract

The fact is we have to make it attractive for the players to stay at Arsenal as a footballing force. Would Messi ever leave Barca?

Oh Jack where art thou?!

Good luck with that

What a bunch of whingers. Grow a pair.

Wouldn’t and couldn’t blame any of them if they left. They came when we were real contenders and I can’t say I can see us returning to that stage again any time soon. If they want to win big titles they’ll have to leave. We’ve been totally blown out of the water and FFP won’t ever help us get back. Sorry chaps.

Bolton preview : it’s all about results « Arseblog … an Arsenal blog

I’m sure being bottom of the table after this weekend will be all that’s needed to convince them.

Fuck knows how we’re gonna dig ourselves out of this shit, could be a very harsh decade.

The Red and White Observer

AW says: in fairness, they don’t hurt me too much. You worry more about the young player who gets in the team at the moment and gets slaughtered. I remember when I was 19 that were much more difficult for me to take.” For more than one year I have been reading negative narratives on this & many others blogs/also channelled in the media (all sources) slaughtering our young and new players. (He is crap is often the words used) Yet on match day we the supporters expect a 19/20 year old to go on the pitch and boss the… Read more »

Robbo Redondo
Reply to  The Red and White Observer

You talk some shit

The fact that dein is the agent is the worrying thing. Can’t see rvp staying unless we have a massive upturn in form , song and tv cant see being a problem Walcott am not so sure, he’s young and has the time that rvp no longer has. Going to be another interesting summer it seems.

[…] we could potentially see more free transfers depart, Wenger has moved swiftly to assure fans that he is doing his best to sign the players onto longer term contracts. The sooner the better I […]

[…] Arsene spoke last week about the need to sort out contract situations with a number of players and you would have to hope that behind the scenes a lot of work is being done. Remember, Nasri had, in principle, agreed a contract extension as far back as last October before he got the heeby-jeebies, so I imagine there’s plenty happening. However, Robin talking about leaving it until the end of the season is a bit worrying, simply because of the position it puts us in. […]