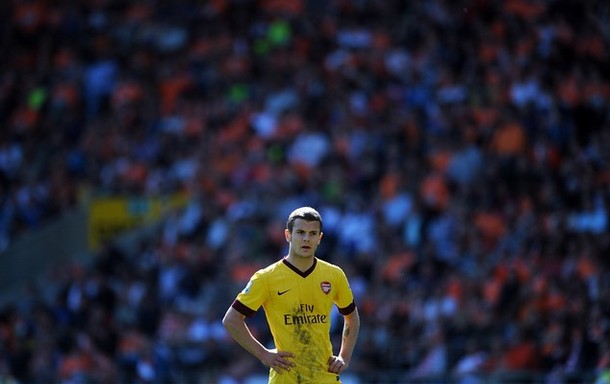 Before confirming this morning that he would indeed be out injured for at least another two months with a persistent ankle problem, Jack Wilshere spoke yesterday to Absolute Radio about his rehabilitation.

The England midfielder was last seen trudging from the Emirates pitch after only 5 minutes of a friendly against the New York Red Bulls and has yet to feature in any competitive action since.

Chatting to former Arsenal striker Ian Wright on the Rock ‘n’ Roll Football show, Wilshere revealed how he would be approaching his recovery after consultation with the medical team at London Colney:

“They’re not pushing me at all to be fair. I spoke to the manager, he just said to me to take my time and come back when I’m ready because there is no point coming back and then having another six weeks out. I’m just taking my time and getting ready.

“It’s massively frustrating. Having had a successful season last year, it’s even more frustrating. This year I really felt I could push on, but I’ve had a bit of a setback but I’m still feeling good about the season. Hopefully I’ll be back as soon as possible.”

One player who looks likely to help cover in the absence of Wilshere is new signing Mikel Arteta. Having already spoken openly of his admiration for the Spaniard on Twitter, the youngster added:

“He’s a great player. I played against him when I was on loan at Bolton and he was the best player on the pitch.

With Andre Santos, Per Mertesacker, Chu Young Park, Yossi Benayoun and the aforementioned Arteta all over the age of 26, Wilshere also made clear that the added experience would be useful in aiding the future development of other Arsenal’s Academy graduates.

“Everyone says that Arsenal are a really young team, but now we’ve got Arteta who I think is 29, Benayoun is a bit younger [he’s actually 31] but still they’re older players and that is what we needed.

“When Cesc was coming through there was Vieira, so hopefully now we [the young players] can really push on.”

Biereth to form part of exciting attack for Arsenal U23s

to be honest, wilshere is “just” a young and talented player, arsene is doing the right thing is telling him that, we shouldnt have to rely on him at such a young age, he needs to take care of himself or it will impede his career.

agreed. Asking him to carry the team at this young age is foolish. It shouldn’t all be on his shoulders.

Is nasri a cunt on this news posting or just the last one ?

He is always one, no matter what.

It’s every post he’s a cunt. Sound advice from ol papa Wenger I must say….

Jack has maturity far beyond his years!! Hope to see him back soonest.

Ps: Na$ri has always been and will always be a Cunt!

No need to rush him back for him to break again hopefully this is a change with how we deal with injuries at the club. We’ve got a decent amount of depth now, on the wings in midf and cb), let’s not rush people back in just to have setback after setback.

Jack is too young to have so much pressure for him to get back into the team. It’s good that Wenger isn’t pushing him.

JackWilshere Jack Wilshere
Hear a lot of people giving our Medical team stick? I can assure I am in very safe hands and we have top class physio’s and masseurs! #AFC
9 minutes ago

POLL: Anyone in favor of ” Blogs Should Sign ALL Posts With ( Na$ri is a Cunt ) from now on ” please raise your hands…..Oh no, wait, you can’t raise hands so just “This” this comment 😉
let’s see how many pros this one gets !

LeGrove weren’t slagging of the medical team, Wenger’s the one that always seems to rush players back only for them to get injured again. A point which I agree with although this time Wenger seems to be realising the error of his ways. Fingers crossed.

@jonnyd. Stop picking on Wenger or you’ll cunter than Nasri.

@jonnyd. Stop picking on Wenger or you’ll be cunter than Nasri.

seriously people, all this talk of Wilshire seems to have blinded you to the fact that Na$si is a cunt! for fuck sake we cant just ignore that fact

…I feel like there is something about Na$ri I’m meant to mention… Ahm… What could it be… It’s at the tip of my tounge!
Any ideas?

If you’re not sure what to do when it’s there, they say it’s best to spell out the alphabet.

You can also spell out your name. I hear thats how our keeper is such a hit with the ladies. . .

I see what you did there!

Question is: why do seemingly ‘harmless’ injuries suddenly become intractable in Arsenal? Just hope we are not in for another Vermalen ‘treat’.

Sandro Rosell, FC Barcelona President: “If last summer we offered €40 million for Cesc, and since then there has been wear and tear, now he’s worth less.” June 16th, 2011

Josep Bartomeu, FC Barcelona Vice-President: “After seeing the work he’s done since his arrival it is true that Cesc meets the €60 million valuation Arsenal initially demanded. The kid is demonstrating a high level of quality in three weeks of training. The transfer was very good. In a market that is so open Cesc is worth a lot of money.” September 4th, 2011

fuuuuuuuuuuuuuuuck that shit, fuck everyone on that team except for Cesc

Better than the 2m we paid for Cesc originally? I think not.

Now back to teabagging Arabs with you, Sandro. Its on the tip of your tongue.

Less than a club.

[…] Mirror was on the money, sadly, and Jack confirmed he’d be out for 2-3 months on his Twitter. He told Absolute Radio at the weekend: It’s massively frustrating. Having had a successful season last year, it’s even more […]

Seems Wengers approach to alot of things have changed past few days , agreed we dont want wilshere to be out the whole season , wenger has a habit of playing an 80% recovered player and we dont want another Vermaelen situation , is it wengers wish to change his ways or do the bosses have a gun to his head

When it comes to Arsenal, sometimes, any news is bad news. Featured Proflie For Today: Gervinho. | Being Arsenal FC Bystander

[…] of 2-3 months out we might see him only next season. Fingers crossed the lad comes back soon! The youngster has said that he will take it easy, and try to give his body as much rest as possible. He said:”It’s massively frustrating. […]