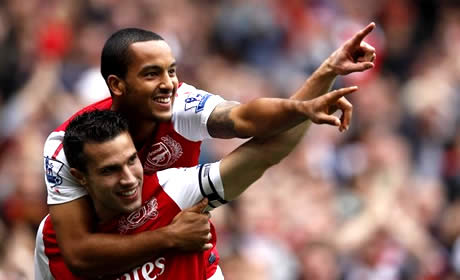 Robin van Persie notched his 100th Arsenal goal recently and the creator of it, Theo Walcott, has provided more assists to the Dutchman than any other player.

He’s made 15 goals for the captain and van Persie says the connection they have is borne out of quality and friendship. Speaking to this month’s Arsenal Magazine, he said, “I know what he’s going to do and that’s so important. Sometimes you miss that with players. With some good players, the opposition don’t know what he is going to do next, but if his team mates don’t know either than can make it hard.

“With Theo I have a feeling that most of the time I know what he will do next. So I can adjust my movements around that. His final ball has been so good lately, I think he’s really stepped up a level. He’s scoring goals, making goals, he’s a top player.

“It’s vital for me as a striker to have a player like that around me. He knows how I think. Besides that we’re friends too and I think it helps when you get on off the pitch too”.

And van Persie praised the influence his fellow Dutchman, Dennis Bergkamp, had on his Arsenal career.

“He helped me a lot. We sat next to each other in the dressing room and we could always have a quick word in Dutch. Everyone knows he’s a very calm and helpful guy. He would always help me.

“I remember one game against Chelsea away, I was struggling against Lampard and Makelele. I asked him at half-time what he would do in that situation. He gave me his opinion and my performance improved straight away. It was a sign of class from Dennis because I was in the team instead of him but he still wanted to help me out. So classy”.

Read the full interview with Robin, in which he talks more about the influence of Arsene Wenger over his career, his 100 goals, who he worked best with up front and more, in the Arsenal Magazine.

Oh Robin, tell us what God said to you!

is it me or does anyone else find theo in poor form this campaign? i think his crossing and general passing game is seriously questionable. that being said i was so disappointed he was injured last season around this time.

@aussiegunner do you watch the a-league?

ZAK THE GOON
Reply to  Plev

No need to be so rude, he can have an opinion you know!

yea i do mate. brisbane roar 32 games unbeaten – nothing better.

Yep, I’m an A – League watcher as well. Living in Melbourne I guess that makes me a Heart or Victory fan by default, but aussiegunner is right about Brisbane – best team in that league by a fair distance right now.

“With Theo I have a feeling that most of the time I know what he will do next…” Really?? What a miracle worker you are, RvP! Legend! Lead us on, Skipper!

‘Even with some good players, their own teammates don’t know what they’re going to do next.’

“I know what he’s going to do and that’s so important.”
Pretty much everyone in the known universe know what Theo is always going to do next: drop the shoulder and use his pace to get to the byline. Well done Theo and RvP all the same though.
“I remember one game against Chelsea away, I was struggling against Lampard and Makelele. I asked him at half-time what he would do in that situation. He gave me his opinion and my performance improved straight away.”
Part of me wishes that Dennis said “kick Lampard in the face”

God:
“ok, so when lampard is coming near you, you need to drop your shoulder, do a stepover, pass the ball, then, as hard as you can, kick him in the balls. That last part is reaaaaally important, ok ?”

It’s only a matter of time before Walcott starts firing on all cylinders… Teams set out to stop him playing by double teaming & setting up tactically to deny space & forcing him out wide… It has worked, however, as the Orcs discovered, we now have Gervinho… They tried the same tactics against him & he shillings em… Anyone else notice towards the end of the game how the Orc army were scared of tackling him…
Anyway, as teams adjust to counter the effectiveness of Gervinho, it will lead to more space & better performances from Walcott.

Your name made me chuckle, I can only hear the words ‘ManBearPig’ in Al Gore’s ‘super, super serial’ voice!

Did someone suggest that RvP was not captain material ?????

I think that this and his previous comments about Gervinho show excellent captaincy. Theo is clearly going through an indifferent patch at the moment and gets the heat from the fans for it, yet RvP is out there praising him and letting us know in a diplomatic way we ought to go easy on Theo for everyone’s sake.

RvP is every bit the captain we need right now and he has class on and off the pitch without being bland and speaking in cliches.

@ Adam, Totally agree with you, Robin in my opinion is the best captain we have had since Patrick. Henry, Gallas and fabregas all great player’s however could you see any of them giving a rousing speech in the dressing room @ half time if were losing? I couldn’t.

That’s why he is our captain.

I suggest you re-watch the games before he was injured and then revise your words. Yes this past few weeks Theo has been hit and miss but to doubt his contribution to the goals we’ve scored just baffles me. The facts don’t lie. So what he’s not the best defender but you know what? I couldn’t give a fuck. He’s a striker playing as a winger and he sets up most of VP’s goals. I’m generally tolerant of people’s opinions regardless of how ridiculous they are but this Theo bashing is pathetic. Theo scares the shit out of defenders which… Read more »

You got advice from a legend Robin. Now sign that contract and create your own legend!!

@plev i just got home from brisbanes match against adelaide. Stunning performance. For all you gooners around the world, there is a team in the a-league (brisbane) that play a fantastic style not disimilar to the way arsenal play when they are in good form. Obviously there is a gulf in class as big as the mariana trench, but it’s nice to see beautiful football over here for once. Apologies for talking about something 99% of you couldn’t give a rancid shit about.

ZAK THE GOON
Reply to  izzyzzi

@ Izzyzzi, Most Gooner’s i know are football fan’s first then Arsenal fan second. I certainly would describe myself as that. The football i like to watch has to be attractive, i couldn’t careless who’s playing it.

No, Arsenal first, always. Then football.

Andrew
Reply to  ZAK THE GOON

So you’d just as soon root for Spurs, if they were playing more attractive football? Is that what were supposed to take from that?

Frog
Reply to  ZAK THE GOON

Uhhhhhhhhh what? You know, I realized I was a true gooner one day about 20 years ago, it was a dreary day and I was bored and just started thinking about football and all the football teams I could think of. Then out of nowhere it hit me! My moment of truth! My moment of realization!! It occured to me that I absolutely fucking HATE every football team except the arsenal. So sorry Zak the “goon” I’m going to have to say your totally full of shit on this. A true gooner doesn’t give a blind fuck about the kind… Read more »

1-0 to the arsenal, remember them days,was’ent attractive but I did’ent give a flying fuck still loved watching my beloved gunners

here, here izzyzyzzi. I hope they can keep it going – whilst boosting the rather low attendance

I got a feeling that every player marking Theo knows what he’ll do when he gets the ball. 🙁

Every time I watch Theo I think he is shit.

Then somebody points out his stats to me and I start to wonder.

Then I hear none other than the great Lionel Messi say that Theo is one of the hardest players to play against and that Argentina were shocked that England didn’t take him to the World Cup and I really wonder if we are just missing something somewhere??

ZAK THE GOON
Reply to  aj

@AJ, Theo just need’s to follow his instinct’s he tend’s to over think sometime’s when in good position’s. He has the talent, if i could talk to him i would go through the most common scenario’s a winger would face in a game I.E what to do when the fullback is marking you tight, in what scenario should you play the ball first time, when should you tuck in and when should you hug the touchline etc etc. The more theo play’s these different scenario’s in his mind and practice’s in training i really believe we could have a very… Read more »

Frog
Reply to  ZAK THE GOON

If I could talk to him? Are you fuckin serious mate? Thanks for the laugh, I needed that. I’m sure Theo will be calling you tonite for some advice on his game. Hahahaha

I’ve got to see that.

All theo needs to do is learn to pass, shoot, beat his man off the dribble, track back, defend a bit, cross and improve his overall judgement. Once he learns those few things, he’ll be a decent footballer.

you do reight well sometimes mate, you make some valid points and sometimes some thought provoking statements but then you say this.. and now I just think you’re a dick 🙂

In fact before I fuck off the boards for a bit I’ll leave you with the words of someone who has been very influencial to me throughout my life. He said, “Play to your strengths and not to your weaknesses. Don’t try and control things beyond your control but instead look at the things that are within your control and change them.” And philosophy aside, trust in Van Persie. If he likes Theo and Messi sure as hell does then maybe just maybe they’re on to something. Perhaps we should all let Theo do what he does best before he… Read more »

Give Robin what he wants + Theo thoughts « Arseblog … an Arsenal blog

[…] burgeoning partnership between van Persie and Gervinho but it shouldn’t be overlooked that no player has created more goals for the Dutchman than Walcott. If that front three can continue to gel and become more effective then I think […]

Tottenham have got Van der Vaart.

We have Van Persie.

I know which one I’d rather have.

[…] I can live with the rest. The Walcott – van Persie connection is an interesting one though. Robin has talked it up before and I think I read somewhere that all of Theo’s assists this season have been for the captain […]

Men Lie, Women Lie, Numbers don’t lie. Theo’s are well above average. Might not look it, as with Arshavin last season – which kept him in the team.

Somehow, he manages to use his strengths to expose players in a way they have rarely/never been. He made ca$hley look a muppet several times, just as he did the Norich LB. I see the improvements in his game.

He is 22, all he has to do is develop at a steady pace and stay clear of the new medical centre. Consistency will come with confidence and team spirit.