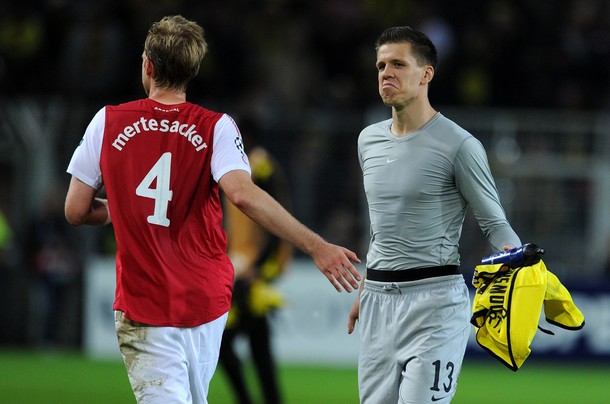 Wojciech Szczesny has given an insight into the work done by the Arsenal back four on the training ground and claimed that improvements are slowly being made thanks to the contribution of new boy Per Mertesacker.

Looking ahead to the North London derby the Polish international, who has somehow earned plaudits for his goalkeeping despite conceding 14 goals already, first touched on the momentum being built at the Emirates after three successive wins in ten days.

“We know we had a poor start to the season and it take time to get the confidence back,” he told Arsenal Player. “We’ve managed to win three games, the last two in particular were really tough and we got good results. We’re confident going into the game at White Hart Lane.”

With injuries and new acquisitions forcing Arsene Wenger to constantly reshuffle his back line, criticism has been levelled at his side’s perceived lack of organisation with many calling on the club to appoint a defensive coach. Despite the obvious problems, Szczesny believes that time together will help iron out erroneous decision making inside the box.

“We separate almost every session. We separate the strikers from the defenders and I do my stuff with the back four and Pat Rice helps us to organise everything. It seems to be working because as I said before you can see the team is better organised and we understand each other.

“Whoever I play with I try to talk to them the same way. I try to approach the game the same way and it seems to be working.”

One new face who is becoming an increasingly important figure is Per Mertesacker. The German international has been immediately thrust into action since his arrival from Werder Bremen, with injuries to Thomas Vermaelen, Sebastian Squillaci, Laurent Koscielny and Johan Djourou, forcing him to get used to new partners in defence on a daily basis.

Praising the 26-year-old German international, Szczesny continued: “He’s a very confident and very experienced player. You can see he is a leader on the pitch and a good lad off it as well.

“He’s the kind of player we needed I think. He’s very strong and very tall; strikers don’t like to play against that kind of defender. He’s made a big impact. I can see him growing bigger (not literally surely?) and getting better as time goes on.”

I would like to see him grow bigger, literally.

Know it shouldn’t annoy me but did anyone just hear lawro on footy focus? He said that basically all our signings are all shit and we have no future as the youngest aren’t good enough, how the fuck has he got that job he knows fuck all

Mooro
Reply to  Lawro you twat

When you consider Robbie Savage is given airtime, anyone is employable mate.

Padwoir
Reply to  Lawro you twat

His 1970’s haircut is taking over his brain, and it wasn’t much of a brain to start with anyway.

He’s a fucking wanker mate talking a load of bollox in the hope some day his poxy predictions might come true, and the sad thing about it is he thinks he’s the dogs bollox a right smoothie the plonker

Death to lorro and all those who oppose the mighty Arse !!!

Also guys when do we start RVP and Dein are lady flowers ?

It’s a funny world when Garth Crooks has to defend us against Mark Lawrowhateverhisnameisson. I couldn’t believe how much hate was coming out of his mouth it was so dismissive.
Anyway it’s good to here Szez bigging up Per.

Larwro is a plonker… If you take his match day predictions and tally points, Liverpool would have won the league for the past 5 yrs…. The muppet!

[…] at all, considering their performance against Olympiakos. However, Szczesny has got me worried with this statement about our […]

I said it after the penalty save at Udinese last month, and I’ll say it again: Szczesny has balls the size of cantaloupes. I love how he seems to be the one in charge.

He’s a stopper we can build a long-term dynastic team around. Let’s hope that happens.

“Whoever I play with I try to talk to them the same way. I try to approach the game the same way and it seems to be working.”

Don’t see how the defense is working at the moment though.

Meanwhile, at the Legion of Doom ….

This is stupid, when I saw that Liverpool was shit in 2004 and saw that Arsenal where great I switched alliances. I expect trophies every season! But know we are stuck with Szezney and stupid players like Vermaelan. What ever happened to Adems or Mathew Knows or Terry Henderson. What happened to Frankie Lowberg to. Oh well I am off the Manchester City now where I can see great players like Messi and Xavi in the red.

GaryFootscrayAustralia
Reply to  The Badger

G – Hunter’s taking the piss out of people who discovered football in 1992, the year that people with satellite tv believe football started…..the modern football fan’s equivalent to the Christian Year Zero, when they realised it was part of their contribution to Murdoch’s retirement fund…ooops. sorry. I meant “satellite tv subscription”.

[…] has also talked up the abilities of Per Mertesacker by saying that he was the player that Arsenal needed. Mertesacker has been pretty impressive in the games he has played for Arsenal and he has already […]

Yo, how long has Pat Rice been organising the defence? I’m trying to work out whether the shambles performances at the back the past couple of years have been a result of his stewardship, or whether he’s just started doing it ‘cos Bouldy won’t be dictated to.