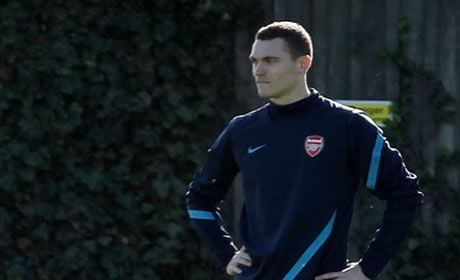 Thomas Vermaelen is in the Arsenal squad for tomorrow’s crunch game against the team led by a man who is not racist at all, after Arsene Wenger earlier raised doubts about his participation.

Speaking to Arsenal Player, the boss felt that after such a long time out injured the Chelsea game might be too much, too soon for the Belgian.

“Vermaelen might be available to be in the squad”, he said. “We’ll have to assess him. He is not injured. He came off with a calf problem on Tuedsay in the Carling Cup. It was cramp because he has not played for a long time and he only had one training session. As I say he is not injured but he might be a little bit short for a game of that intensity”.

However, at his press conference this morning, Arsene confirmed he would be part of the squad despite still having some concerns. “I feel he’s not completely physically ready, but he always wants to play”, he said.

Vermaelen’s presence could allow the manager to move Laurent Koscielny to right back in the absence of Bacary Sagna and Carl Jenkinson, although the youngster will have a late fitness test ahead of the game.

I might have to dust off my Verminater t-shirt. I don’t think I’ve actually worn it out yet.

That brings some solidity at the defence, good news

I heard that lightning never strikes twice because TV5 told it not to….

No gay, but the thought of Vermaelen schooling Torres/Anelka/Sturridge/Kalou gives me wood.

….and with Chesney between the sticks.

We can win this game. We can certainly not loose it with these guys at the back.

Now Wenger says Arsenal can wn the league.At this point in time,the signs are unlikely. The defence could be put to the sword if they were to face MC now.Things can change if there is an injection of new faces and the gunners dont attack 100% of the time spurning chances. I would be happy if the gunners can have three chances and convert all three of them. The Chelsea game is big one. Arsenal must win to make a statement of intent. A loss will mean back to the drawing board.There is no reason why the gunners can’t win.They… Read more »

Jesus Wilfred, talk it down why don’t you?

When did Wenger say we were suddenly going to win the league? In the AGM he stated that 4th was the aim, which i think is a very good starting point. Get 4th, see where we are and then make a final push if 1st is within range. Also, how do you know that MC would take us apart? Everyone knows what they are about now so won’t be surprised by them. This is also the team that drew 2-2 with Fulham despite holding a 2-0 lead. The personnel wasn’t different for these 2 games. One was a game where… Read more »

Save 75 cents
Reply to  Martin

TV5 once took the 6pm train home after practice. Unfortunately for police, he refused to give it back.

If Torres wakes up tomorrow morning, he was lucky Vermaelen spared his life..

He doesn’t go swimming. Water just likes to be around him.

I heard TV5 can influence other players to fall over and give him the ball. Especially when he’s running furiously at them.

That was too wordy. Look up Chuck Norris facts…

TV5 died 20 years ago, Death just hasn’t built up the courage to tell him yet

TV5 can slam a revolving door

Team news for match against Chelsea | Being Arsenal FC Bystander

[…] for some team news. Vermaelen is in the squad for tomorrow’s match. However, the Boss has stated that the Belgian might not play as the […]

Apparently, TV5 is the STIG.

Drogba got a red card because he’d heard TV5 might play on Saturday.

When Alexander Graham Bell invented the telephone he already had 3 missed calls from TV5…….

This is hilarious. I am laughing out loud on the bus here.

Brilliant am pissing myself

The Genius of McGoldrick

I heard the Belgium Government wanted to name a street after TV5. The problem is, nobody crosses TV5 and lives………………John Terry will find that out this Saturday!

it made him blink

When TV5 does a push-up, he stays in one place and the Earth moves.

TV5 is a diamond (but harder)

This is too wonderful and too much, am pissing in my knickers with laughter,please don’t stop!!! John Terry must be on planet mars by now!

and he gets it

There is no theory of evolution, just a list of creatures TV5 allows to live.

TV5 can believe its not butter

Did you know TV5 had a role in Star Wars… He was the force.

TV5 can light a fire by rubbing two ice-cubes together.
Paul The Octopus was asked to predict when would TV5 Die… R.I.P PAUL !!!!

TV5 can BBM from a Nokia.

[…] team news for today is that Thomas Vermaelen is in the squad. Arsene says he’s a bit reluctant to use him so soon after Tuesday’s comeback game but […]