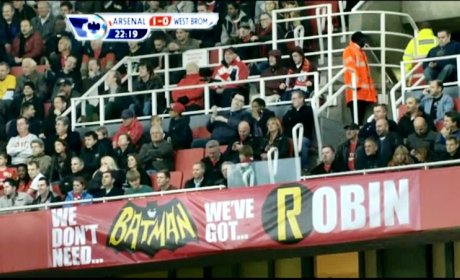 592 – Average number of passes Arsenal attempt per match
721 – Passes attempted versus West Brom today2
30 – Crosses attempted versus West Brom today2
9 – Number of those crosses played by Theo Walcott
8 – Number of those crosses played by Carl Jenkinson
4 – Total Arsenal successful crosses versus West Brom today
1 – Successful crosses by each of Song, Gervinho, Jenks, and Theo
10 – Number of Arsenal’s unsuccessful crosses where I thought “hang on a minute, that’s a good ball.”
8 – Number of Arsenal players who passed the ball at a 90% rate or better (Ramsey 94%, Jenks 93%, Koz 92%, Santos 92%, Gerv 92%, RvP 92%, Benayoun 92%, Arteta 90%)
93 – Total passes by Mikel Arteta today
108 – Total passes by the entire WBA midfield of Morrison (47), Brunt (31), and Dorrans (30)
96 – Percent of Morrison’s passes that were successful3

That’s your lot for this game. I have a By the Numbers article brewing for the interlull so look for that over the next week or so. If you have something you’re looking for drop me a line in the comments.

I also posted a bunch of photos from the game today over on twitter if you are stuck at work and need a pictoral recap head over to @7amkickoff.

1. This section only refers to League play.
2. The most of any match so far this season.
3. Leads all players

This is just the beginning…wait until the team finally jells and you’ll see real football. Sorry for those who doubted/insulted/ridiculed ‘Le prof’. Must be biting their fingers now

We are back bitches!!!! Hahaha

Brilliant win and a great way to go into the lull.

Arsenal captain & assistant are both imported 4m Dutch clubs, Both have surname start with V with Va being the captain and Ve being the assistant. They scored in order with Va scoring the 1st and Ve the 2nd. Sign of orderliness & greatness at d emirates?

Remember remember the 5th of November…

We are TOTALLY back! I am always sceptical when, after a few bad games, the masses suck-up to the media circus and call for (pointless) sackings. In Arsene we STILL trust!

I must admit it feels so good knowing I never doubted our manager or our belavoved Arsenal. Wenger is this best thing for this club PERIOD! Well VP10 of course. At the beginning of the season the media couldn’t wait to rip us a new one. Now we’re back and they go quiet. It makes me laugh, and these are the fools that some fans let wind them up. The only problem I have with the club is the tight ass board. It is all they’re fault, stuffing their pockets while wenger has us punching above our weight realisticly for… Read more »

Amen. Best post ever. Sack the board. Wenger a legend forever at the grove. We’ve been punching above our weight for a long time now thanks to him. If only they would let the man spend some bloody money. Even if it was one quarter of what citeh spend, we’d dominate the league.

A brilliant performance by the boys. We’ll be in the champions league this time next year easily. COYG

Great piece. Thanks. am becoming addicted to By the Numbers.

you ever tackled our relative injury ratios? Eg average percentage of first team out injured per match v. manU etc? We’re always going on about our injury record which seems truly awful but do the numbers stack up?

That would be tough but not impossible

UntoldArsenal index’s that sort of thing, they’ll have the raw data. Including comparisons with the bigger teams.

Also do a ref reveiw, but all that proves is you can make the correct decision with a replay button.

8 – the number of mornings I’ve woken up smiling from ear to ear, having witnessed John ‘the racist’ Terry fall over like an OAP and Arsenal proving we’re back

[…] has the full match report, while 7amkickoff provides us with some interesting and eye-pleasing statistics from yesterday’s […]

8 – Number of days since that captain, racist, cunt went mental on the grass because Van Persie repeatedly left him on his arse.

[…] the first time this season Arsenal have a positive goal differential. Having played 11 matches for a total of 990 minutes of action, it was the 939th minute of play […]

Lots – Number of Arsenal fans who have already decided we are back even though Arsene Wenger is advising we be humble and not start to expect success too soon.

Lots – Number of Arsenal fans who are probably right

So GD, what exactly is your point?

3- the number of points Arsenal trail the top 4 by

1 – the number of arsene Wengers

[…] Saturday against West Brom he completed 90% of his passes, with a total of 93 successful passes in the game. Compare that with the West Brom midfield trio […]