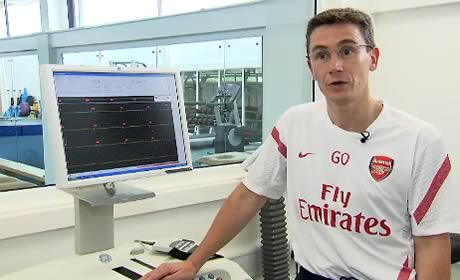 In recent years the press haven’t been kind to the Arsenal medical team, even going as far as to suggest players sought medical advice from other teams. This coupled with long term injuries to key players and the tendency for a “few days” to turn into a “few months” has tarnished their reputation. Arsenal have moved to remedy this recently by showing us a glimpse of their state of the art new facility  and how we’re looking to improve.

Up until now it’s been very rare to see any actual scientific research that proves these Arsenal claims, but in June this year the British Journal of Sports Medicine published the UEFA study of “the 50 best European teams”.  Arsenal obviously was included, Sp*rs didn’t get a mention. Injury data was analysed from 7 consecutive seasons (2001-2008). I’m a physio and spend my days rehabbing injuries and helping people return to sport. What follows is my interpretation of this research.

Firstly the research proves that, despite what we might read, we don’t have a higher injury rate. On average each player was involved in 254 hours of football over a season (213 hours training 41 match hours). In this time the “mean total injury incidence” across all 7 seasons was 8 injuries (±3.4) per 1000 hours. The “±3.4” bit indicates the variation across all teams and is surprisingly low considering the time frame and number of teams involved. It suggests there isn’t huge variation between elite European football teams. Colin Lewin has commented on UEFA research,

“There is a lot of official UEFA evidence that has been going for many years, to which we participate. This is scientific, published data and when you see this data our injury rate is approximately in the middle of the table. It is really the only reliable source of data for this sort of thing”

Over a season each player had an average of 2 injuries.  Each squad had an average of 25 players meaning that over a season you’d expect 50 injuries. The season is recorded between July and May so that’s over 1 injury per week. I think that puts the frequency of injuries we see into perspective but it’s worth noting that half of these would be minor, causing absences of less than a week.

Severe injury was defined as one that caused an absence of over 28 days. The most common severe injury was hamstring strain (12%) followed by MCL injury (9%) and quadriceps strains (7%). The average team can expect 8 severe injuries per season. Data from Chelsea FC had different results, where the most common injuries were from falling on your face (89%) and rectal damage due to insertion of Nokia 3210 (12%).

From an Arsenal point of view, interesting to see the “severe injuries” data, considering the time frame, would have covered Diaby’s injury, Eduardo’s fracture and the start of Rosický’s almost unique hamstring problem. On average a player missed 37 days per season due to injury, roughly 12% of the season. I would imagine this data can be skewed by some injuries, considering for example, Rosický didn’t feature at all in 2008-2009.

There has been a lot of focus in the press on dangerous tackling and its role, undoubtedly Diaby, Eduardo and Ramsey would argue its relevance and yet 43% of all injuries in this study actually occurred during training. Of the remaining 53% that occurred in matches just 21% were due to “foul play”. Overuse injuries were quite common, more so in preseason, and made up 28% of all injuries. Wilshere’s stress fracture would probably come under that description.

Re-injuries made up 12% of all injuries and resulted in a significantly longer absence. We know that all too well … Vermaelen, Diaby, Cesc, Gibbs etc.  The research recommends the use of adequate testing prior to return to sport, I’m sure this is in place at Arsenal but in the past I think we have been guilty of returning players before they are ready. Whether this is the player’s desperation to play or the manager’s instruction is hard to tell.

From a physio’s perspective we know how important fatigue is, as players tire their risk of injury increases. The research supported this theory by finding an increase in injury frequency towards the end of each half and also a slight peak in injuries towards the end of the season in April. This is where strength and conditioning work is so important. Muscle strength combined with agility and good control of movement help reduce risk of injury.

There is a rumor circulating in the physio world that AW doesn’t like his team doing too much strength and conditioning work, preferring them to spend time with the ball at their feet. I know he has a reputation of total control at Arsenal but with the facilities at their disposal and the medical staff they have I can only assume that there’s little truth in this.

I think it’s fair to say we’re in safe hands with our medical team. The research proves we’re on par with the 50 top teams in Europe and with the new facilities in place things can only get better.

Interesting and very informative Arseblog. I think we all knew they were only romours. To think that the might of the arsenal had problems with their medical staff was completely absurd. Love the remark about Chelsea, made my Friday!

Its always frustrated me when we are portrayed as a “frail” side. Our injuries have been highlighted because they have often come to the key members of our squad. Obviously we have has our share of injury prone players like any team. The other point I always try to make is the that the way we play football we are bound to pick up more knocks. When you whip the ball around with light speed its much easier to get caught with a mistimed tackle. Obviously a team that moves like a old man with knees and hips past there… Read more »

Hey Tom, thanks for the info it made for some very interesting reading and somewhat flys in the face as you indicated of the press’ (and some sections of the fanbase it must be said) hyperbole when it comes to our constant ”injury crisis”.
Do you know if the statistics UEFA provide cover just injuries or illness also ? Someone being out for a couple weeks with flu symptoms is still unavailable, but from what I understood from your peice, probably wouldn’t be recorded as unavailable for medical reasons.
Your Chelsea stats made me chuckle. Kudos.

Hey Padwoir, the research doesn’t mention illness specifically but I think they included that under “other” as another cause of absence. They included injury to any body part that might prevent play the vast majority (87%) were injuries to the “lower extremities”.

Actually the problem was never in the mental acuity of our medical team, but it is down to premier league and pointless international breaks. We all know how premier league refs abet physical side of the game and sometimes go over the top against Arsenal(ahem ahem Philly Dowd). Everybody knows this that we are the best team in the premier league in terms of keeping possession and rivals can only contest against us by rotational fouling(man united). The injuries that we have suffered are for players who were victims of rash challenges because premier league refs again think Arsenal are… Read more »

“There is a rumor circulating in the physio world that AW doesn’t like his team doing too much strength and conditioning work, preferring them to spend time with the ball at their feet. I know he has a reputation of total control at Arsenal but with the facilities at their disposal and the medical staff they have I can only assume that there’s little truth in this” I know that Arsenal do significant strength and conditioning work during the pre-season, but not too sure during the regular season. I know they do ‘body to body’ exercises, where they will hold… Read more »

Hi David, you’re right that weight work only makes up part of training and rehab but it is an important part. Swelling and disuse after injury causes muscle atrophy and weakness. There is a lot of research showing that the most effective way to remedy this is resistance training with weights (or resistance bands). Adequate strength is essential for impact and explosive power (eg sprinting) so usually you strengthen and do control and agility work prior to return to sport specific drills and plyometrics.

Thanks Tom, i would imagine that the use of resistance training helps the muscle fibres to continue to be used in the correct direction, as (far as i’m aware) scar tissue forms in a cross hatching effect accross the muscle reducing it’s effectiveness? I agree that some strength training is an important part of a fitness programme, for the reasons you’ve stated, but there is also a lot to be said for gaining control/agility through a football drill. I don’t have much experience of creating a rehab programme for a footballer that has been out for example 6+ weeks, but… Read more »

Very informative. Let me first thank you for this post. If I may quibble with part of it… “just 21%” is unsupported editorializing. I read that to be 21% of 53% of all in-game injuries are caused by foul play. At just over 10% of all injuries, foul play accounts for approximately 5 injuries per season, per team. I venture to say they account for some of the longest-term injuries. Some of those tackles in all games are preventable as well and their occurrence is influenced by refereeing. I would be interested in seeing these numbers for arenal compared with… Read more »

Perhaps our injuries appear more severe because we don’t have the same strength in depth. We have a great first 11, a few rotational players, and then the kids. We’re only a rosicky or vermaelen away from having to rely on diaby or djourou, which is scary enough, but after them there is an even bigger drop. If we were to lose Van Persie or Ramsey right now, we would be struggling again, no doubt.

David, you’re right about the benefits of a small sided game and its much more sport specific than pumping iron. True as well that multidirectional work is important but if you start before adequate strength and control are gained you run the risk of re-injury, especially with rapid change in direction.

Jasonissimo, totally fair point!
There’s no doubt that those most severe injuries, even if small in number have a massive impact on a player. My point was that, relative to training ground injuries (43%) and even overuse injuries (28%) their incidence is low.

Just wanted to say, thanks so much for this article. Quality. Followed.

Great post. I’ve wondered about this many, many times in the last few seasons!

The optomist, you have got that spot on I’ve thought that for ages, strength in depth or lack there of has been our downfall of late, we never have good enough back up for what is a world class first 11, man city would be capable of putting out two teams that could do well in the league

[…] tell the whole story. Diaby has reportedly had 29 injuries since 2006. On average a player would expect two injuries per season. He has, on average, had around five per year and faced lengthy layoffs, playing just 20 times in […]

[…] you like learning a bit more about injuries, I’ve posted elsewhere on injuries in general and specifically for the unfortunate Mr […]