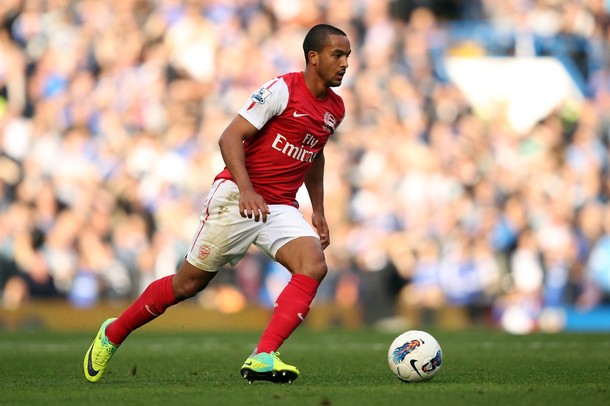 Arsene Wenger has hinted that Theo Walcott could be the solution to a likely striker shortage in the New Year.

Arsenal currently only have Robin van Persie, Ju Young Park and Marouane Chamakh as recognised out-and-out strikers, but with the Moroccan and attacking midfielder Gervinho set to play for their respective countries in the African Cup of Nations in January Wenger will have few options up front.

Reflecting on the potential problem, as speculation mounts that he will have to dip into the transfer market, Wenger insisted that as things stand he is happy with his squad.

“At the moment I have a big squad and we need to keep them all fit and motivated,” confirmed the boss.

“I feel as well that you can count Gervinho and Walcott as strikers.

“Many times in press conference people ask me why we don’t play Walcott in the middle so he can play there if we need to do it.”

While Walcott will no doubt be buoyed by the suggestion he may finally get the chance to emulate his hero Thierry Henry, Arseblog News can’t help but worry that a full-blown striker crisis is just one crunching challenge on Van Persie away. Let’s hope that doesn’t happen…please God don’t let it happen.

Thierry Henry excelled while playing only in a four-four-two formation and so will Walcott. Especially with his height, he will not be a threat aerially. Needs to play alongside RVP up front.

I dony see the point, because all three interchange to play up top. So no need to create drama.

4-4-2 changes the shape completely, who would play elsewhere? Benayoun on one wing and Ox/Rosicky?

I hope he buys a Striker or a Winger , anyway he knows best

How will he win the aerial challenges?

We’ll worry about that if we become stoke, rangers, celtic or bolton. How many has RVP won so far?

[…] Chamakh’s injury is not as damaging as Gibbs’, for firstly, the striker is out of form and confidence. Secondly, Arsene has already stated his belief that we have a plethora of strikers to choose from, such as Walcott. […]

podolski van persie gervinho would be a nightmare for anyone

we can have arshavin, walcott,chamakh,park for rotation.arsene should never make the mistake he made with xabi alonso ie saying buying him would kill denilson.
arsene has the best chance to buy PODOLSKI AND GRANERO to replace NB52 and denilson….this would also tie down van persie,walcott and song contracts…..meanwhile i just hope diaby plays football again…nobody knows whats up with him….should arsene keep him or not!?it’s upto diaby to prove….i personally think m’vila could replace diaby(both box to box)….arsene will not go for m vila when he has diaby

Podolski is a Koln boy through and through. He’s like our Jack Wilshere.

Money talks though, I guess.

…and coming back (!) as he just wasn’t happy at bayern munich,a bigger club. i quite like him, but don’t see him going abroad to be honest

I wouldn’t mind Podolski, but couldnt ever see it happening. As Nugget said, he’s a kolner through and through. The Koln fans helped raise 1 million Euros to subsidize the club buying him back from FC Bayern.

I see Goetze as the more likely signing and the prospect of that one makes me jsut a tad giddy. I’d love to see our Theo up front, I think a 4-4-2 formation would be ideal but I think with his pace and the calibre of our passing it wouldn’t be a massive problem if he was on his own.

I don’t see 442 happening, it completely changes things and makes it much harder to play possession football. I would like to see theo down the middle, itd be an option to rotate vp. who cares if he won’t win the aerial challenges, we don’t play that game!

I know he’s the obvious choice but id love to see hazard, I think we’ve missed the boat there though!

If Theo plays ST role, he needs to be more precise with his finishing. It’s not always the best…

Please God no. Let’s not just throw him in their if VP gets banjaxed. Try him there in a Carling Cup or something first….

We can’t go 442…that’s an old formation…doesn’t suit the modern game we play..as for Walcott he’s far too inconsistent….we need a signing of goetze,or hazards talent and calibre….

For quite a while I’ve wanted to see Walcott play up front. But recently, I’ve changed my mind – the front 3 of gervino- rvp – theo is just working too well right now to stop it.
I’d rather us just buy another striker!

the thing is I think Wenger has to give him his shot up front because he doesn’t like playing on the Wing. If we don’t give him his chance then there’s a very good chance it would affect any renegotiation on his contract.

As for the guy who said Theo’s finishing isn’t that good…. o_O

I think walcotts finishing is one of his better attributes really. He doesn’t use his pace on the wing quite as well as he should and i for one would be interested to see what he can create in the middle. Well, if we find ourselves thin on te ground for strikers anyway but long may rvo

If Wilshere, Ramsey, Arteta, Song, Frimpong, Coquelin and Diaby can hold down the midfield for the next few years, I would make a striker the number one priority.

Also, is it interesting that Walcott is in the middle of contract negotiations and Arsene starts hinting at movving him to striker? If Walcott and Song sign longterm, I could really see RVP resign.