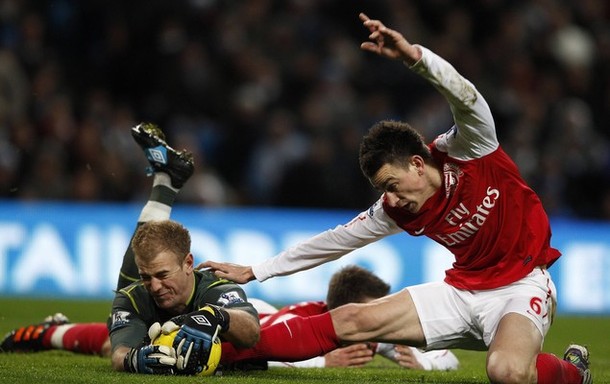 Arsene Wenger has paid homage to the improvement of Laurent Koscielny and admitted he is pleased the defender is finally starting to earn the plaudits his performances have deserved.

Picked up from Lorient ahead of the start of last season, the newly capped French international has come on leaps and bounds in his first 18 months in England overcoming setbacks, including his mistake in the Carling Cup final, to become a key component in the Gunners first team squad.

Speaking ahead of the match with Wolves, the boss spoke warmly of Koscielny to Arsenal Player:

“He is a special player and he’s starting slowly to get credit.

“Let’s not forget before the Manchester City game we did not know if he would play or not because he had flu.

“He doesn’t speak a lot, but his performances speak for him.”

Koscielny’s versatility has been vital in recent weeks with Arsenal’s defence currently operating without any recognised full-backs. Touching on the way in which utilising centre-backs on the flanks has altered his side’s style, Wenger continued:

“We are a bit more cautious going forward because a centre back is not a full back.

“Maybe we are a little bit more resilient defensively and a bit stronger in the air but overall it doesn’t change a lot and we still try to play out from the back with our passing game. It’s changed it a little bit.”

I keep catching myself thinking to myself, when watching games, how awesome he is as a defender at times!

No shid, he is the best CB in England. Amazing talent.

I aint into that kinky shid man

Would it be absurd to think, and say that he’s better than Vermaelen defensively?

(I say defensively because, no defender in the league compares to Vermaelen from an attacking point of view. Especially how he’s scored more goals than Torres in far less games, ha!)

shid the shuck up

What sad prick would give me the thumbs down coz I spell shit as shid?

Looks like we have a few English teachers who aint enjoying their xmas breaks, shid bags.

Seriously though I think he’s strong. Like a skinnier, non-cunty John Terry?

Better than the cunt and ten times faster.

Kos is a badman. He takes no shid.

There is no doubt in my mind that Kos is the best defender at the club and probably the best defender in the league. The difference between Kos and Vermaelen is that the Verminator is sometimes too prone to go all out and give 125% instead of the “normal” 110% he usually gives. Just as an example the two goals we conceded against Barfa in 2010, both down to Vermaelen being too enthusiastic about making an interception, missing the ball in both cases and letting Ibra through because he was caught out. Offensively however no one compares to the Verminator.… Read more »

That was 2010’s Vermaelen ,He is our best defender he has some qualities that Koscielny still lacks . LEADERSHIP .

I think since the return of the Verminator we haven’t conceded more than a goal .

I just enjoy the fact that we have three world-class CB’s and no talk of a defensive crisis anymore..

You know, besides having all our full backs injured

Prolix and Sid are both the same person? Right?

Rule of thumb: any 2 people patting each other’s backs when no one else does it (publicly) are the same people.

We have a shid hot spine now, Szczesny is the best keeper, Koz, as I said already, the best CB, Song is awesome and in RvP, well, no need to say anything there except;

His slide tackling is fucking unreal. Even last season when we lost at the Nou Camp, there were so many times I thought one of Barca’s front 3 were going to jink past the defence until Kos slid in out of nowhere and CLEANLY won the ball. He does it a lot. Class act!

Is it considered blasphemy if I say Kosielny is better than Vermaelen?!

Kosc is a beast, i’ve liked him since the beginning, but as Arsène said, he is just starting to earn plaudits. His performances have been nothing short of amazing this season, and with the Verminator he will form a center back partnership to fear for the years to come. Mert is a great backup, and with Vermicielny capable of filling at either left or right back, they are truly a wonder to have. I’m not joking when i say that in Verm and Kosc i honestly think we have the best center backs in the league. They dominate in the… Read more »

I rate them both very highly too, but (in my opinion) the best center back in the league is Vincent Kompany, and then either Vidic, Coloccini, Vermaelen or Koscielny.

Still it’s great to have two such amazing defenders at the club, their all-round game is brilliant to watch. Koscielny in particular is so quick that he could play as a winger, if you see him get beaten in a foot race then I would be very surprised!

So it’s safe to say that Koscielny is our new Adams while Vermaelen is our new Keown. Well we know how that turned out over the years don’t we….

With the departure of Nasri, Cesc and blatant deterioration of Arshavin, it feels like Arsenal is now less individualistic in winning, except for the scoring outlet. There was once a time where deploying Cesc as a substitute brought us 2 more goals and a win against Villa, there was also a time Na$ri won Player of the Month accolades for match-winning goals or that night in Anfield for Arshavin, but now we feel far more rugged and tougher than our previously enigmatically brilliant selves. And there are just so many players stepping up to top-flight levels so well this season… Read more »

Sorry Bob we are different mans. I am not shiddy sid.

This from Arseblog Tuesday 7th September 2010:

“This stat from Koscielny in the French league last season is interesting. He didn’t lose one tackle for the whole year. Which is quite amazing, really. He says it’s something he works hard on in training because it makes it easier when you go on the pitch.”

He is showing that kind of form now in a tougher, faster more skilful league. I’m impressed each time I watch him….

Kos is brilliant this season but we should also give credits out to our whole defence as one defender don’t make a defence.

I love the Kung Fu tackle on Hart too!!

The fact that we can argue between Kos and Vermaelen is brilliant! Well done to Kos, he deserves all the praise he gets and welldone to the Professor for finding yet another gem!

I’ve always liked le’ kos. Class act.
A bit off topic but anyone watched senderos tear through the whole cuntskie team to ret up the fulham equaliser? Happy for him, he finally got some personal revenge over those cunts and ensures that a home win today takes us above them

Is there a ballet competiton going on at The Arsenal? First Ox now Kos?

Never mind the spelling, am only Ugandan. So that was meant to be set up not ret up and that was meant to be cuntskie with double cunts. Ps as an armchair scout i say please buy that 17 year old fulham winger (frei), Arsene! Looks like gotze in size and strength and seemed to be singled out by the cunts yesterday and they had two cunts on him everytime he got the ball, and he beat them everytime. That cunt bosingwa could have collected 3 yellow cards alone for failing to live with the kid but got away with… Read more »

I have to admit that I didn’t rate Kos when he first turned up at Ashburton Grove. But he has been brilliant this season. My favourite Kos game was that one away to Chelsea, when he was our best defender by a country mile. There must be no slip-ups today. Recent results elsewhere have all fallen our way, now we have to capitalise on them. Chelsea don’t even look like a top-four team right now, and despite their great start I still believe that Spurs will fall away. Our next three games are very winnable; we have to start by… Read more »

when i think about it, we actually are a very good defensive unit with defensive players of the highest quiality.

Underrated from day 1. A defenders defender. When u get beaten by your man (I’m not an advocate for domestic abuse), there is no better feeling than seeing a teammate own the focker. He sweeps, mops up, and blocks shots with all parts of his body. Meteoric rise would be an understatement. I believe he had 98-100% tackle success rate after 6months (and I’m pretty sure it was a 100%. Crackish defending a la Gandalf against the balrog. I hate to compare him to TV5, I’d rather think of them as an entity that caters to all your central defensive… Read more »

How the fuck does Mexes get ahead of Koscielny for France, I’ll never know.

Koscielny is clearly the best French defender currently and even fucking Thuram was praising him. He is better tah Rami/Mexes and still the clown Blanc does not pick him regularly, the cunt.

Agree with Ajax that Kompany is in incredible form right now and is one of the big reasons for City’s record, along with Hart.

I remember when Arsenal first bought Kos. One of his first quotes was, “I’ll work like a dog!!”

He has certainly lived up to his promise. Hard tackling CB. Can’t really say that he’s a better CB than TV5, but I think they play well together.