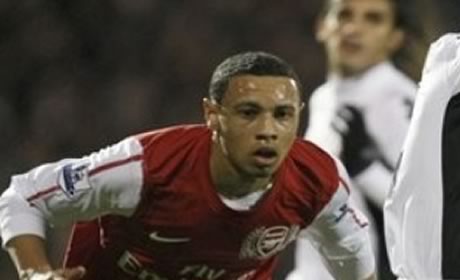 L’Equipe is reporting that Francis Coquelin is set to extend his Arsenal contract until 2015.

Despite some reports earlier in the season that he was unhappy with his lack of playing time at the club, the French U21 international made it clear that he knew he had plenty still to do to convince Arsene Wenger.

“As soon as the manager needs me I have to get on the pitch and give everything for the team”, he said. “There is always things to get better. I’ve still got a lot to work on. I’ll keep training and hopefully do better.”

The youngster has shown his worth in recent games, filling in with great style in both full back positions, and despite the poor result against Fulham was one of the bright spots from that game. 2012 could well be his breakthrough year.

He’s got a tenacious attitude, loads of energy and no small amount of footballing ability, so let’s hope the L’Equipe report is accurate. Let’s face it, who doesn’t fancy a bit of Coq?

this good news! he is currently our best LB

As well as being the only one.

I’m probably the oly one that doesnt know but what does LANS mean???

This “wenger-ism” properly refers to a player recovering from injury, usually a long-term injury.

If I go for a holiday and lets say I did not come to post here for couple of weeks, then I come back would I be a LANS too?

Make that and our best RB too.

It would certainly make sense. He can play both at both left and right back and in defensive midfield. As long a he keeps improving he has a really bright future.

It would also show (as if further proof were needed) that breaking into the first team squad isn’t the impossibility it is at many other clubs.

Been a fan of his for a while now, so glad he has made it into our squad after his loan spell, and hasn’t been ushered out quietly like so many other promising youngsters. The great thing about Arsenal is that if a young guy starts playing fairly consistently you know that he is 99% guaranteed an amazing future.

Thought he done it weeks ago, still great news from what we have seen so far , looks like he has everything.

It’s a very good news. He’s hardworking and have a very bright future. As long as he keep his work rate, he will be a great player. Coq – Jack – Ramsey, what a great combination in the future,, or maybe it might not be too long.

in Coq we trust. anywhere on the pitch

Yeah, good news all round. Not so long ago it was SZCZ having a moan up about going elsewhere, before getting his chance, so let’s hope Le Coq goes the same direction.

He is a star in the making. Great news,great future.

Coq seems to be growing well 🙂

with a name like that the fans are gonna love some coq cant want to hear the chants …..unleash the coq on those spuds!!

At the very least it’ll show spuds what having a Coq on the ball is *supposed* to look like.

I just hope he doesn’t have a girlfriend, because we want Le Coq to be free to play every where.

Nobody can have any complaints about Arsenal lengthening their Coq

We had no other choice, this Coq really gets stuck in…..everywhere.

He’s a silky coq too!

I’m pleased about the exposure that the Coq is getting.

Brilliant attitude, brilliant fighting spirit, great talent and I am sure will become an Arsenal rock in the future… Has everything it takes to make it and make it big. His guts and tenacity against Fulham was inspiring….
I am very happy!

Holy pigs feet! 17 positive comments and no moaning? Arsblog must have been boilk with loads of coq’. Up the coq’!

Wenger must take Le Coq in hand and help him grow in strength.

you had the funniest by far

Who let the coq out?

Coq likes to play with the handbrake on.

walcot should learn from him how football is been played..1 dimensional walcot!

Coq-pong on a song
3 players 1 position such a injustice!!!

This season has shown me arsen will play his coq anywhere, anytime he likes, especially down the back!!!

I am sorry for intruding but here is a news that I couldnt resist sharing : http://timesofindia.indiatimes.com/sports/off-the-field/John-Terry-England-football-captain-mulls-legal-action-over-Indian-cigarette-packets/articleshow/11352675.cms

Shame on the downvoters. Anything with a picture of John Terry being killed is fine in my book.

Anyone know where I can get fags with a picture of John Terry being killed by smoking on them over here?

Was mildly surprised by the downvoters. I guess they felt I was trolling

You’re only getting thumbs down because the link doesn’t show the pic if you access it on a mobile device.

Thanks for sharing that. That gave me my best laugh this morning, even after all the fine plays on the Coq’s name!

Great news about Arsenal extending their Coq. Let’s hope the hole in the middle is now filled permanently.

Up the coq and all those who get their hands on it he is a top player.

Also did anyone see how shit Nasri was against Sunderland and then got hauled off .

Coq can play on the left or the right. But his best position is right behind the hole with the liscense to penetrate at will.

Hmmmm..and isnt it, sorry he, so skillful.

NEWS OF THE WORLD spoof headline:

Strange goings on lately at Arsenal, the home of football. After the recent public erection of their all time leading goalscorer The Arsenal have today confirmed a Coq extension ceremony has taken place in a small room at their medical centre at London Colney.

Rumours have been circating the internet that Andre Arshavin may be the next to extend although his manager has refused to comment on small speculation, strangely though his giant teammate Per Mertesacker sat out training this morning complaining of stiffness.

I hear Arsene is also trying to bring Davor Suker back to the club so he can play him up front with Coquelin…..I find the thought of a Coq Suker partnership quite exciting.

Not to be a ball buster, but Jamie Sanderson from The Young Guns Blog tweets that its not a done deal yet. He is close to agreeing a deal until 2015 but not yet. The source is the same. Maybe we jumped the gun there a little bit Blogs?

Would be great if it went through. For all Frimpong’s enthusiasm and showboating, its obvious Le Coq is much further in his development and soon, Alex Song will have some serious competition biting on his heels

so bloggs was a bit premature in his coq story?

coq has a great tackle!

Ladies and Gentlemen, we have one hell of Coq in our hands.

I like the thought of Kuntz with Le Coq tucked in behind.

the coq is great in tight areas

i still remember seeing him for the first time this season in the carling cup. And the so called defensive midfielder doing double step overs on the wing to beat a man and thinking “who the fuck was that?”

Theo, the salary game, and more « Arseblog … an Arsenal blog

[…] other contract relatede news, L’Equipe are reporting that Francis Coquelin is set to extend his contract until 2015. Good news if true. He’s a player that’s caught the eye for no other reason than his […]

Best young player we have after wilshere. Classy player with great confidence.

This website uses cookies to improve your experience while you navigate through the website. Out of these, the cookies that are categorized as necessary are stored on your browser as they are essential for the working of basic functionalities of the website. We also use third-party cookies that help us analyze and understand how you use this website. These cookies will be stored in your browser only with your consent. You also have the option to opt-out of these cookies. But opting out of some of these cookies may affect your browsing experience.
Necessary Always Enabled
Necessary cookies are absolutely essential for the website to function properly. These cookies ensure basic functionalities and security features of the website, anonymously.
Functional
Functional cookies help to perform certain functionalities like sharing the content of the website on social media platforms, collect feedbacks, and other third-party features.
Performance
Performance cookies are used to understand and analyze the key performance indexes of the website which helps in delivering a better user experience for the visitors.
Analytics
Analytical cookies are used to understand how visitors interact with the website. These cookies help provide information on metrics the number of visitors, bounce rate, traffic source, etc.
Advertisement
Advertisement cookies are used to provide visitors with relevant ads and marketing campaigns. These cookies track visitors across websites and collect information to provide customized ads.
Others
Other uncategorized cookies are those that are being analyzed and have not been classified into a category as yet.
SAVE & ACCEPT
wpDiscuz
64
0
Would love your thoughts, please comment.x
()
x
| Reply