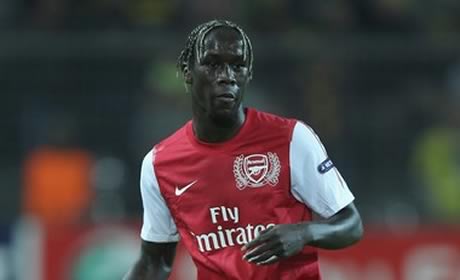 Arsene Wenger says he’s ‘relieved’ to have Bacary Sagna back after a 4 month spell on the sidelines with a broken leg.

The French international is one of the most consistent performers in the team and without him, compounded by injury to his replacement Carl Jenkison, we’ve had some struggles. Sagna could be back in contention for a first team place tomorrow against Aston Villa in the league and the boss is happy to see him return, along with some of the other injured players.

“Bacary is back in full training,” he said. Many players who are not specialist right-backs have been playing in this position so we are relieved to have him back.

“At the moment, many players are on their way back. I’ll have to look at them and see how much of a gamble I can take because we play again on Wednesday. Gibbs will certainly not be involved at all on Sunday, but the others could be involved. That will be decided before the game.”

The boss also hailed Laurent Koscielny who has emerged as one of the brighter spots in this, thus far, gloomy season. He had his first season problems but has shown real character and quality to become a fan favourite.

““I believe that last year you could already see the potential but he did not have that dominance in the duels that he has found this season.

“That makes him, I personally believe, one of the top-class central defenders in the Premier League.”

And Koscielny himself is aware of the importance of the cup in English football and wants to make sure that after the last few weeks teh fans have something to cheer.

“I know in England that winning the FA Cup is a very big trophy for the team. You know that the FA Cup is difficult because it is a hard game for 90 minutes. We know Aston Villa, we won away but it was a difficult game.

“Now it is at home we want to go as far as possible in this competition and so we have to win this game. It is important for the team because we have lost our last three games, and for the supporters because they were not happy after those defeats.”

He wont look like a wrinkly old upside down U now!

Broken leg and still back before Diaby…..lolz

Bin Laden will be back before Diaby.

Bin Laden has had a setback , but he’ll still be back before Diaby

I heard his set back might just be inflammation.

Did Kos give a statement???

Shits about to get real…..

Not just Wenger but the whole gunners are happy to have Bac back! With two noisy neighbours were kicked out from the FA cup competition, we should try our best to win the cup.

It great 2 ave him back

great news. Even better news that United are out of the cup now.
That just leave the shit down the road, the shit across town and the shit on the mersey left that are a real threat.
We really had better beat Hans Moleman’s shite this time.
COYG

God save us from ‘SETBACKS’

Cant believe it’s been four months. In a strange way it just don’t seem that long. Good to have him back.

The cups up for grabs… With ManShitty out & Klanfield doing one over ManUre, and fingers crossed our wounded returning, we have a chance.

you could’ve had LiverPoo oh well…

Duly noted… guess should have said..
The cups up for grabs… With ManShitty out, LiverPoo doing one over ManUre at Klanfield & our wounded slowly returning……

Bac looks too fuckin cool in that picture. GLAD TO HAVE YOU BACK MAAAATE!!

The cartoon army are down to Brighton too, let’s hope we can get the right result tomorrow, and put our recent poor form to an end.

Great News about Bec, the best RB in the league by far. As for Kos, wouldn’t be wise to go and slap 5 years improved contract NOW or the summer before we wait till he has 2 years left in his cotract?????? I saw Kos potential last year and I thought he was one of the best defender in the league EVEN before the Barca game, He even reminds me of Adams when coming out of defense with the ball (neck stretched and hand bent to the body). His stats on one v one was 100% success. But, as he… Read more »

If we know Wenger by now, he would leave until Koz’s contract lasts less than 1 year, then he’ll renew it.

Wish I had 4 Koschers at the back!

this is one LAN I have no complaints about!

Despite the damage already being done (Wenger: “it would be stupid to drop points because we didn’t have a fullback…” uhhh witness January’s losses), it’s great news that Sagna is on the way back. As for the rest, it’s pure lunacy to expect Gibbs to ever contribute more than 5 or 6 games per season. With Santos out of the season, any sane manager would have bought a left-back. It’s also pure lunacy to ever expect Diaby to return, yet Wenger will. You know, you think of successful clubs like United. Do you think Ferguson would put up with player… Read more »

Can’t we have one day without weeping into our cereal BB? Even Cygan was totally positive above! There are some things you forgot to mention about UTD, in that they’re based up north, have cretinous supporters, and their manager is bent as a 9 bob note. If you feel we as a club should look up to them, then you’re way too objective, and kind of missing the whole point. It will be a massive boost to have Sagna back. With Arteta back too, and the emergence of the Ox we’re starting to look like we can field a proper… Read more »

Really?? Well, I present you Owen Hargreaves.
Diaby is brittle agreed, but very talented and you don’t give up on talent – not when they’re still young.

Well, I present you Tomas Rosicky.

He’s actually played more than a season’s worth of football since his return from long-term and career threatening injury, often playing the full 90. That’s a proper comeback, not Hargreaves’ occasional leisurely guest appearances for Shiteh when there’s a “nothing game” on in Middle Eastlands.

Not 2 b disrespectful or anything but daiby shud be given free 2 teams like shamrock rovers. Dat way(if he can) but he’ll be d big man there.

This website uses cookies to improve your experience while you navigate through the website. Out of these, the cookies that are categorized as necessary are stored on your browser as they are essential for the working of basic functionalities of the website. We also use third-party cookies that help us analyze and understand how you use this website. These cookies will be stored in your browser only with your consent. You also have the option to opt-out of these cookies. But opting out of some of these cookies may affect your browsing experience.
Necessary Always Enabled
Necessary cookies are absolutely essential for the website to function properly. These cookies ensure basic functionalities and security features of the website, anonymously.
Functional
Functional cookies help to perform certain functionalities like sharing the content of the website on social media platforms, collect feedbacks, and other third-party features.
Performance
Performance cookies are used to understand and analyze the key performance indexes of the website which helps in delivering a better user experience for the visitors.
Analytics
Analytical cookies are used to understand how visitors interact with the website. These cookies help provide information on metrics the number of visitors, bounce rate, traffic source, etc.
Advertisement
Advertisement cookies are used to provide visitors with relevant ads and marketing campaigns. These cookies track visitors across websites and collect information to provide customized ads.
Others
Other uncategorized cookies are those that are being analyzed and have not been classified into a category as yet.
SAVE & ACCEPT
wpDiscuz
32
0
Would love your thoughts, please comment.x
()
x
| Reply