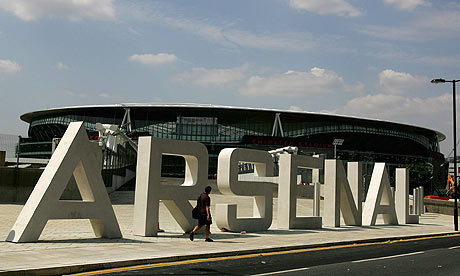 Arsenal are one of only 16 clubs out of 160 in England’s top seven divisions who have responded positively having been asked to promote a campaign to stamp out homophobia.

Contacted to take an active part in the Football v Homophobia campaign, the Gunners have quite rightly indicated they are willing to publicise the drive; a state of affairs which is in marked contrast to fourteen other Premier League clubs who have avoided any such commitment.

Nevertheless, despite being onside with moves to tackle football’s ‘last taboo’ it has been suggested, in an article by The Independent, that the Gunners (along with five other top flight clubs) dragged their feet when asked to help organise a photo shoot to promote the Government’s Sports Charter to combat homophobia and transphobia in sport.

Speaking ahead of the Blackburn game, designated to celebrate Arsenal for Everyone, chief executive Ivan Gazidis, put forward his reasons as to why the club had signed the Charter:

“Signing the Government’s Charter for Action builds upon Arsenal’s commitment to drive an inclusive atmosphere and calls everyone to unite against homophobia in sport,” he told Arsenal.com.

“Football has the power to bring people together in a unique way and we believe there should be no barriers to feeling a sense of belonging to Arsenal Football Club.

“This is something we will continually drive – particularly through our Arsenal for Everyone initiative – which aims to create an inclusive atmosphere for our fans, staff, players and followers – whoever they are and wherever they’re from.”

Justin Fashanu, who committed suicide in 1998, remains the only UK professional player to come out while still contracted to a club, while Sweden’s Anton Hysen is the only openly gay player currently playing in world football.

It’s a wholly regrettable situation, but perhaps not surprising given the complete lack of leadership on the issue from FIFA president Sepp Blatter – a man who recently suggested that gay supporters travelling to the 2022 World Cup in Qatar ‘should refrain from sexual activity’ because homosexuality is illegal in the Gulf State.

Andy Wasley, from Stonewall (the Lesbian, Gay and Bisexual Charity), said: “Actions speak louder than words, and it’s one thing to sign a charter, it’s quite another then to actually do the hard stuff like training officials and stewards to make sure they challenge homophobia when they see it.”

Arseblog News commends Arsenal’s willingness to tackle homophobia and hopes that the club does its utmost to promote the campaign in the near future. Just because we’re not winning trophies doesn’t mean that we can’t earn the respect of the football fraternity and wider community in other ways.

We’ll always be classy regardless of results .

It goes beyond class.AFC are categorically stating that supporting our
beloved team should not be hindered in any way.
P.S. Love AW comment about people who criticise him who have managed
zero clubs,zero games and zero Europe games.
The man has style.

When will Gazidis and Wenger put their foot on the ground in positive support of the phobia that most directly concerns us – FOOTBALLPHOBIA.

I hope in 20 years time we’ll look back at the current attitude towards homosexuals in football with the same shame we have went we remember how we dealt with racism. I would be quite proud if one of our players was openly gay, what does it matter, you only have to look at the reaction to the welsh rugby player coming out to see we’re quite a welcoming society. As homophobic chants become more unacceptable I expect the crowd to become more self policing. You only need to shout something once and then have the big ugly lump behind… Read more »

One? Encouraging our lot to come out could start a stampede! I’d wager Tommy, RVP and Song as the only ones not to have taken a walk on the wild side

Glad arsenal are dong this, but blogs is right. We should be doing so much more. We should be leading the fight, showing no mercy to arseholes or all types who spout homophobic and racist abuse.

Notice gotten ham haven’t signed up, what a bunch of cunts. By saying that Liverpool signed up and then sent 90 minutes abusing the Brighton fans for having lots of gay people in their wonderful town. God I hate Liverpool those cunts.

I am staggered at the amount of clubs that have not put there name to this.
The question should be why have they not ? What possible reason could they have for not wanting to back this.

So the season is not over for us after all. We can still win the anti-Homophobia Campaign!

Even if we don’t win it “4th is a trophy”, because trophies are sooo yesterday and over rated.

In this day and age of creating new awards AW is only following a
well worn path of trophies.The best example is teams finishing 3rd-6th
in the championship 4th-7th in Lge 1 and 2 playing a final at Wembley for
a real trophy.Its all about money.
In other news I notice that AW has rung Manny Petit and told him that he
is at his lowest point or was it just another attempt to up the pressure on
the man who will bring us the EPL 4th place trophy this year.

With our current Trophyphobia, christening 4th position as a trophy will effectively make it elusive to us.

Though I agree that homophobia is wrong, I honestly do not understand the point of promoting homosexuality as something amazing. I completely agree with Arsenal’s stance in this matter

when did Arsenal say anything about promoting homosexuality or not?
This is about standing up against people who ignorantly abuse others for being ‘different’, why shouldn’t Arsenal and every other team show their support and actively do something to stand up against this?

I never said Arsenal are promoting homosexuality. I said I agree with their stance..that homophobia is something bad. I disagreed with this article which says Arsenal should do more.

And abusing someone for being homosexual is wrong..but it doesn’t show ignorance..racism shows ignorance..being against homosexuality is a point of view..one that is ignored more and more in favour of the ‘BEING GAY IS GREAT’ opinion which is shoved up people’s noses until its considered fact and everyone suddenly believes homosexuality is something to be applauded. 50 years ago, you wouldn’t have posted that comment defending homosexuals because it’d have been the norm to hate them. Same thing could occur with incest in the next half century or so..as already there are many more cases of it occuring

mate, I think you’re moving on thin ice here. you’re saying that being racist is ignorant but opposing homosexuality is a valid point of view? maybe it’s just your wording, but…there is no such thing as a “being gay is great opinion”, this is about respect towards other people. I don’t think ‘hey, being gay is cool’, I just respect gay people as I respect any other people because there is no reason why I shouldn’t. Comparing being coloured, being gay, and incest is just and utterly stupid point to make. Same goes for illustrating this point with what society… Read more »

‘you’re saying that being racist is ignorant but opposing homosexuality is a valid point of view? ‘ I never said whether it is valid or invalid, you came up with that conclusion yourself, which illustrates my point about how being against homosexuality is now considered somehow barbaric and medieval when it is an opinion. Also, I have not once said that gay people don’t deserve respect as I’ve clearly pointed out they should be treated equally as shown by my quotes here…’I said I agree with their stance..that homophobia is something bad.’ ‘And abusing someone for being homosexual is wrong’… Read more »

Alright motherfuckers, who stole my name and is making me look bad…
then again mines sJ not sj. yeap, big difference!

Sj I don’t think it’s about promoting homosexuality, it’s about acceptance and tolllerence. and surely that has to be right ?

I’ve said homophobia is bad..hence I agree with acceptancing and tolerating homosexuality.

I like it when the Arse always open to this type of support.

Le Coq should play big role in the campaign.

On the up side, if the campaign works then not many teams fans can say.. Up the arse. And mean it !

I think that it’s filthy, disgusting and unnatural…the way that Wenger is allowed to continue as manager after winning nothing for seven years.

Heh. Smooth as ever fats.

I think it’s amazing how many people even use this story to rant about our trophylessness although this has to do fuck all with it…you’re afraid, that others might no read your comments under the sunderland match report because there are like a bazillion comments? [fear not, whatever point it is you want to make — it has already been said by someone else anyway]

Not every single thread has to turn into a discussion about our current problems.

Oh yes, I am sure that is the ONLY reason my link was removed,.

Thanks, Blogs, for doing such a good job on covering this story.

There should be a campaign to stop abuse of Spurs and Man United fans too. They can’t help it, they were just born that way. We should be more accepting.

G
Reply to  The Truth

[…] That’s just how Arsenal are. They are one of 16 out of 160 clubs who have signed on to the Football v. Homophobia campaign. In a sense, Arsenal are similar to the way that I imagine the NBA being: a big club in a big, […]