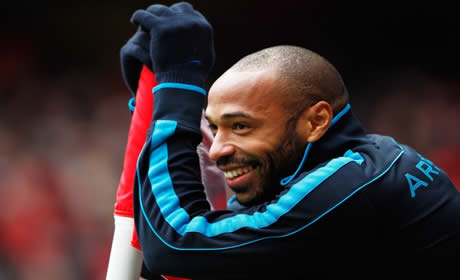 For many Arsenal fans, already delighted by the goals against Leeds and Blackburn, Thierry Henry’s loan spell should only end in one way: the former captain nutmegging his way up the pitch during Arsenal’s game with Sp*rs on Feb 26th before running back the other way, turning around, nutmegging them all again before cunting one in from 35 yards to win the game in the last minute causing Harry Redknapp to reach Twitch-con 5©®.

However, it seems as if that dream is unlikely to become reality. New York Red Bulls head coach, Hans Backe, revealed at a news conference that having spoken to Thierry just a couple of days ago, he was expecting him back on the 17th of February.

“He will be back here in New York when I talked with him a couple days ago,” Backe said.

“February 17, in between our two camps. What I know, it’s only rumours. I haven’t heard anything from them about extending the loan.”

Henry has already spoken about the responsibility he has to his current club, and while it would be nice to see him put one to the scummers again, we have to respect that he’s only our player on loan and he’s got to fulfill his duties in the MLS.

If there’s some kind of reprieve which would see him play, then great, but let’s be thankful that in the 6 week loan spell we’ve seen a couple of goals and nobody will forget that wonderful Leeds moment.

Oh jolly me. I love that video!

As much as I would love him to extend his loan, it just shows what kind of a guy the man is for staying true to his word. F*cking legend.

I know the Grove has seen some special moments in its short history (Arshavins winner against Barcelona, Cesc’s quick fire double against Sp*urs, etc.), but for me, that goal against Leeds is easily number one. I don’t often scream like a girl, but on that cold, January night, I’m man enough to admit that I did.

He will always be the best. Thank you for being class even in this short loan spell TH14.

More than the games he helped us win and his contribution on the pitch is the influence he would’ve had on the youngsters like Nico and AlexOx and the like. They got to train with a real legend of the Arsenal and will be much better for the experience. I was really uneasy about his return as he always had this superior air about him but he seems to have gelled into the dressing room perfectly. Thanks for the brief burst of memories Titi, you sent us back to a nicer time with that goal against Leeds, if only you… Read more »

Henry has been inspirational for the fans, the squad and the club. A talisman. It would be good for him to leave on a high – if we continue to play him, the years will show even more.
We needed the boost in confidence and spirits. Time to say thanks and goodbye

Make Chamakh grow a beard and shave his head..then send him to Red Bulls

I don’t think chamakh could get a game even in that side.

Sure he will , we are just being dicks , I remember he was involved in some 20+ goals when he joined (goals,assists,penalties won) ,He just needs a run of games or a change of clubs

why is my name required

228 and still counting, thank you thierry for all those wonderful goals, you’ll always be welcomed back home with us

Whats with all these message guys? We still have another 3 more games with him, you never know what could still happen….

Man that gives me goosebumps every time i watch it. long love the king

Great as the Henry goal / celebration is, I love how Szczęsny appears at the halfway line to join in!

[…] with Thierry Henry unlikely to be around for the Sp*rs game, and no possibility of anyone else coming into the squad until summer, I’d rather see the old […]

Fed up of Barca

Hope he gets a brace tomorrow, or better still one tomorrow and one v Milan to make his total a nice round 230

Love every minute he plays for us. Was always going to be a short fix but boy does he always deliver! The cup goal was the pièce de résistance to his cameo in a problematic season for the gunners. His presence has lifted the manager, players and crowd. True legend.

As an American, I was hoping that the lack of quality of the MLS compared to Europe would naturally imply that Henry would spend more time here on loan. American players and/or players playing in the MLS make much more noise back home with their exploits in Europe. It’s a win-win: people are reminded that the MLS exists when commentators always have to mention that Henry is actually a Red Bull on loan, and Henry gets to cement his legacy, groom his successors and thusly scare (even more) the living piss out of American players when he returns because he’s… Read more »

Arsene should get in his request in to Red Bull now for next year’s Henry loan.
Would love to have him at the club next year at the earliest possible date in order to continue our young players’ education, and maybe get a crack at Spurs/Ewwnited/Pool.

Forever grateful for Thierry for all hes done for us. Up and above the call of duty as a player, rare to see players who actually love the club they played for these days.

Agree with the comments before, we should secure him on loan every January! Win-Win!

I remember last year one Red Bull game on TV, a sluggish performance by the MLS side, and Henry displayed such class and skill that made the rest of the look the worse by comparison.

That’s “rest of the team”. I think we need an edit function on this site.

[…] with Thierry Henry unlikely to be around for the Sp*rs game, and no possibility of anyone else coming into the squad until summer, I’d rather see the old […]

Chamakh and Gibbs back, Arshavin stays. Or does he? | Arseblog News – the Arsenal news site

[…] also confirmed the earlier story that Thierry Henry would be returning to New York Red Bulls the day after the Milan game, despite […]