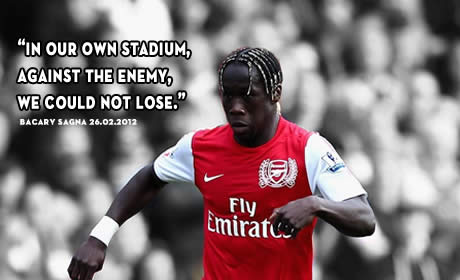 Bacary Sagna says the cirumstances of yesterday’s game ensured that Arsenal found the spirit and resources to come back from 2-0 down to obliterate Sp*rs 5-2.

The French international thumped home Arsenal’s first goal, which set the tone for the rest of the remarkable comeback, and he believes the occasion was as much an inspiration as anything else.

Speaking after the game, he said, “We could not let it go like this, this is one of the most important games of the season. In our stadium, against the enemy, we could not lose.

So we kept the head up, got the first goal and then after the rest.”

The enemy. Yes, sir. The enemy.

“It wasn’t easy, at 2-0 down we had to show resources and mentality to come back and we did.”

“I knew the ball was going to be back to me that’s why I stayed forward. I wanted to score and I’m very, very happy to score today.”

And doing it for the fans

Sagna enemy pic on Tumblr – and apologies for the most badly written article of all time but you get where I’m coming from.

Great to have you bac 🙂

Indeed. RVP may be most talented guy in the squad, but Sagna is one of the best athletes I’ve seen in a gunners shirt. We’ve really missed him a lot while he was out injured.

It had everything to do with us.

If we play like this until the end of the season all the bad memories going back to last summer are going to be erased. We know we can. We know we must.

Spot on. In the second half, especially, we played the the kind of brilliant attacking football that we haven’t played for ages. And Walcott showed that he CAN finish, if he is just ruthless and selfish enough.

This has been such a weird season: we have struggled for most of it, but have had three of the greatest results in our Premier League history (against Chelsea, Blackburn and now Spurs).

The players must take this result and carry the confidence it brings into the rest of the season. If we can keep going like this then we WILL get fourth.

We have no chance of finishing 4th.

We will be 3rd

There is no team in the world that can beat or snatch a point if we show the same desire, drive,passion,passing everything that was there to witness yesterday.no team i mean no team can get a result against us when we play like that.

A few have been known to dig up their pitches upon our arrival so here is to hoping for decent pitches so we can do what we do best.

It’s been great listening to Spuds pretending to be magnanimous but trying to belittle the spanking in the next breath. I’ve heard one claim that with the exception of RVP they are to a man better than us. Really? Essou ekoto? Kaboul

Yes they’ve had a good run but I seriously think we could catch them up now. How funny would that be, a terrible season for us and a great one for them and we still finish above them. COYG.

I love you bacary!! He’s perfect

Who said that foreigners don’t appreciate the importance of local derbies?

Alan Hansen or some other count

Anfield next week is key. If we can get 3 points there, there is a real chance that we could be just 4 or 5 points behind the Spuds.

If you guys watch back the match, you can actually see he stared at every one of the enemy face fiercely during the handshake at the beginning. As if he wants to punch everyone of them in the face!

Felt Sagna was looking a bit rusty for the past few matches but he certainly stormed back yesterday. What a fine header!

i admire Bacary Sagna mentality especially how he is involved with the team in such derby i hope we can grab 3 pts fron anfield the team should focus more and i hope we can have back rosicky and vermaelen soon cz they r injured.

Top man Bac. Glenn Hoddle’s comments that only van Persie would get in the Tottenham team now and that Dawson was better than Vermaelen look even funnier the day after.

Wrighty was loving it!

” In our stadium, against the enemy, we could not lose.”

If only we had 11 players with the mindset of Sagna…..

indeed man we should have players with same mentality of sagna

gun for the hills
Reply to  waterbear

Arsenal need to make that into a plaque to put in the stadium!!

Bacary, its not only Spurs, also Man City, Chelsea, Newcastle, Liverpool, they are all enemies and should be treated with vengeance. You hear me! But Spurs is always a way to start the killings.

Bac is such an underrated player – easily one of our best. If only Walcott believed he could play like that every game he would also be world class. Well done boys!!

I don’t think he is underrated,he always appears near the top of EPL
defenders,it’s just that he doesn’t shout about it like some players do.
He is a class act and hopefully with a more settled back 4 we will now
get back to where we belong.
Did Chesney actually touch the ball at any time after their 2nd goal ?

the crazy pole’s best moment was when he took the ball into the corner of the box and dared adebayor to come and get it off him before he picked it up. gotta love that crazy kid. the spirit of jens lives on!

the best moment was when SZCZ hugged the ball boy when we scored the fifth goal. such a class act.

just the ball boy.. after we scored! they hugged.pretty fun character our szcszc

Does anyone know if Clive Allen made an effort to shake Arsenes hand yesterday?

He didn’t see AW because he was still up Arrys behind at the end.

Always have a tenner on matches against the cunts with a Spud I’ve known for years, at work.

He just shouted over he’s got my money. Oh, giving me a note, I asked, as I much prefer five 2’s?

Ha ha.
I’m just listening to Mickey Hazard impartially analysing the spuds performance, he actually said that sp*rs need to get back to doing what made them a ‘great’ team. How deluded are these spuds? Great? They’re 3rd, 7 points and 1 place above an average Arsenal. What has this great team acheived? Half a season of good football.

Just thinking, bale looks like a monkey, Tarzan had a monkey called Cheatah, bale is a cheating cunt- coincidence?

Was he talking from his taxi.These are the jobs ex spuds has beens
get.
Here’s a tip mate .There is no way that the words “Great” and “Spuds”
will ever appear in the same sentence whereas “cheating” and “Bale” is
a regular occurrence.

Loved Bac before…love him even more now following that ‘theyre the enemy’ quote.
We need our whole squad to have the same mentality as our classy spud thumping right back!

“In our stadium, against the enemy, we could not lose.”… Fucking epic statement there!..I actually heard it in the morning while watch MOTD, almost choked on my toast! Welcome Bac!! consistency boys 4th place is achievable….fuck that! 3rd is very possible! COYG!!!!

I love this guy.

Love that Guy – Thinking I might get some dreads in his honour .

Kreame of the Crop

Happy Birthday indeed blogs! Where would I be without you in my life? Hahaharse! Superduper excellent result boys, now fucking push on with it! 7 points between us and the cunt cocks, reel’em boys!

Anyone else love his shot attempt from like 25 yards out? Ours mids rarely take that chance.

Great to have Sagna back, but would be even better with Andre Santos back fit too – he was starting to remind me of a more thuggish Silvinho before his injury! Get well soon Andre…

No leaders they say…

Bac would’ve run through a brick wall to have scored that header.

strong tackle bacary sagna where are you!?time to celebrate

God love this club, blogs happy birthday you your gift before the D day yesterday, hope you loving it. Bac you’re the man you are like a lion with that header, thanks everyone for winning especially against the enemy in our stadium, “we can’t lose”!!! COYG.

They booed him as he lay injured on their pitch, with a broken leg..Remember? NO BETTER REVENGE than that 5pur2…… BOOM BOOM BOOOM! Too bad the scoreline doesnt give us a chance to make jokes like they did withe OLD trafford one.

Happy birthday blogs, Tks for taking a whole lot of ‘shit’ from us and refraining from getting mean, Thank you for ignoring when we break your laws, like writing off-topic, just like I am doing now. Before I discovered Arseblog I use to have sleepless nights after a bad Arsenal performance, but now I just vent it here and feel good afterwards. Tks for bringing all these great people with whom we argue, disagree, get shitfaced, abuse ourselves and yet find enough strength to still move on. I will be at the Airport to welcome My Gunners when they come… Read more »

The Enemy ‹ Arseblog … an Arsenal blog

[…] you’ll have seen Bacary Sagna’s quote about winning on Sunday. Speaking after the game, he said: We could not let it go like this, this is one of the most important games of the season. In our […]

[…] to overturn a two-goal deficit to a five-goal thriller that handed them three points against the enemy, Tottenham Hotspurs. Robin van Persie scored Arsenal’s second goal with a magnificent curling […]