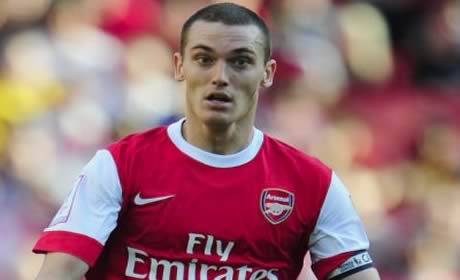 Thomas Vermaelen says the team are ‘excited’ by tomorrow night’s trip to freezing cold Italy to play AC Milan at the San Siro.

The Gunner have had two magnificent results in the great Italian stadium in recent years. That 5-1 v Inter Milan and the 2-0 victory in the 2007-8 season in which Cesc and Emmanuel Adebayor scored the goals.

Of that team only two are in tomorrow’s squad. Bacary Sagna started and Theo Walcott was a 71st minute change for Emmanuel Eboue, while Robin van Persie was an unused sub.

So for the majority it will be a new experience but the Belgian defender is looking forward to what promises to be a cracking game.

“We are all really excited,” Vermaelen told the official site. “It is a big game – an important one too – so it’s a good one to look forward to. For everybody it will be special so it will be a great evening.

“Of course they have a great history and they have won it a few times. They still have some good players and they are a solid team. They are also doing well in Serie A.

“It won’t be easy but I am confident that we can qualify.

“The San Siro is a great stadium of course and it will be a great evening. I think it is probably the best game of the round and a lot of people will be watching.”

Meanwhile, former Sp*rs cunny and midfielder Kevin The Artist Formerly Known As Prince Boateng says that his current side will come out on top tomorrow night because Arsenal don’t know what to do.

“I’m not scared of Arsenal. The problem with Arsenal is one day they play amazing football and then they play really badly.

“In the end they don’t have balance. They either play unbelievable football or they don’t know what they’re doing.

A bit like the league trophy from Sp*rs cabinet, you giant headed gimp.

well let’s suppose for a moment he has a point, in January we were utterly awful shite, but it’s February now and we’ve been scoring for fun and grabbing wins from hard away games. So if he’s right, AC are a bit fucked, then.

Anon
Reply to  the only sam is nelson

I don’t know whether or not he’s assuming AC Milan don’t know what they’re doing on certain days too. Well I guess the stupider they come the louder they bark.

Hasan
Reply to  the only sam is nelson

We were crap in jan because of 2 reasons (mainly)

1. no fullbacks against team with good wingers (fulham,swansea and utd)

the only sam is nelson
Reply to  Hasan

I fear the intricacies as to why we had a shitty january might be lost on boateng, for whom ignorance is clearly bliss. at least until tomorrow night when february’s “unbelievable” arsenal turn up and tear his side a new one

What a pillock. Hope Robin & Henry make them pay for that comment.

If only we had Mr. Forehead to nutmeg him on his way to curving a curler into the far corner.

We all are excited. I might not be able to see it. Taking my students for a study trip but I am excited. I think if we play with the tactics of attacking from wide areas, we’re going to dominate. Keep the compactness and attack from wide areas. San Siro has a huge huge pitch and that should suit our style of play, we usually tend to do well when pitches are huge except for OT don’t know what happens there. The player I’d miss most tomorrow is Andre Santos. Would have loved to see him overlapping from left and… Read more »

The Stadium atmosphere is unbelieveably loud and hostile, and that is never easy for Young Guns…… But I can’t see that fazing The Ox, Le Coq or any of the other youngsters… The Verminators and Artetas of the world will relish this.. This is why they joined the Best team in the world….. and RVP…. well ‘nough said…… He will Explode!!

For the first time in a while I feel we actually have the players who would take motivation from a bit of dismissive smack talk from a man who’s only achievement is injuring Ballack (commendable, but not exactly putting him in the running for Balon D’or). Can’t imagine Vermaelen or Arteta taking too kindly to it anyway.

That rings a bell. He’s the Boateng who isn’t good enough to play for Germany and has to play for Ghana instead, isn’t he?

To be fair to him, he’s one of the stars of the Milan side. He would probably not get into Germany, but he’s still quite good.

To be even fairer to him, he’s a classless arrogant moron who declared for Ghana a month before the 2010 WC and then retired from international football at 24 as soon as it was over. Any bets that he’ll come out of retirement in 2013/14?

” The problem with Arsenal is one day they play amazing football and then they play really badly.”

As opposed to Milan who always play amazing football? Every weekend? And who never play really badly? NEVER EVER?

Arsenal started horrible, then played awesome for roughly 10-15 games, then played badly for the next 5-6 weeks, and have played well in the past week.

I am a Ghanaian and a Gooner. K.P is a bigger c?nt than nasri. Dats unprofessional and childish. Even seedorf is not confident they’ll even get a draw. His comments shows hes afraid of ‘The Boys’ Never mind guys, we have a psychology degree holder as manager, he’ll psyche the boys better. AC Milan 0-2 Arsenal.

Wenger has a degree in Economics not psychology.

Excited enough to explode all over Seedorf?

Ebouefan, let’s hope not. There will be children there for gods sake.

I actually think Per is a big miss tonight because I doubt Gibbs is ready to face a team of this caliber esp away from home. It means most likely Le Coq will come in at full back. He’s energetic but Per’s experience and positioning nous would have been preferred against a wiley old Milan team.

This should be a good opportunity for Walcott since Milan will come forward and are not the quickest in defense from what I’ve seen.

I really want to see the OX terrorize their defence and Boateng himself, that will make a very good statement when the next leg they have to put 4 defenders on an 18 year old on his first season .

A bit like the league trophy from Sp*rs cabinet, you giant headed gimp.

brilliant blogs just brilliant, that comment made my afternoon

Just heard we beat the ex-Wolves manager’s ex-reserves 3-0 with Squillaci playing. So he’ll not be a wildcard for tomorrow night. Same goes for Miquel and Yennaris. (Both of which I rather like.) So it looks more and more likely Koscielny and Vermaelen are going to be our centrebacks. Which has got to be a huge boost for everyone. The teamsheet more-or-less picks itself after that: Szczesny, Gibbs, Vermaelen, Koscielny, Sagna, Song, Arteta, Ramsey, Ox, RVP, Walcott. Interchangeables: Rosicky, Arshavin, Henry (sub). It’s been some time since we’ve been able to field a side as strong as that. Gervinho back… Read more »

Sorry but is this the same guy who failed to make it at S*urs and Pompey??

Since last May, Osama bin Laden, Steve Jobs, Muammar Qadaffi, and now Whitney Houston have all died in the days after Ramsey has scored. Spooky. [Fark] – http://www.fark.com/cgi/go.pl?i=6938571&s=1

I’d be okay with Milan losing a certain player…

You simply can’t take seriously anything someone whose middle name is Prince says.
Especially when his first name is…Kevin.
Parents eh,who’d have ’em?

Starting XI against Milan, gobshites, Dennis speaks and pace is our deadliest weapon. |

[…] excited, the players are excited, so the game can’t come quick enough. A victory would be wonderful, a score-draw would be […]