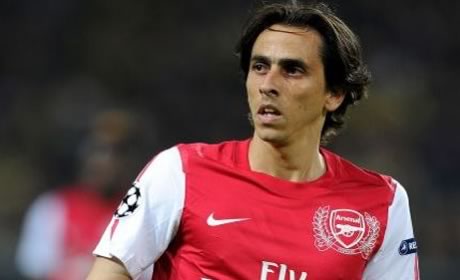 Yossi Benayoun says that although he enjoyed his part in Arsenal’s 5-2 thrashing of Sp*rs who, it must be added, have never won the league in colour, he’s frustrated by the lack of playing time.

After making a late substitute appearance against Blackburn at home, the Israeli sat out both away trips to Sunderland and the Champions League game in Milan.

Speaking after Sunday’s game, he said, “To play 88 minutes, especially in a derby, is a great pleasure. I enjoyed every minute of it, but I still don’t know what will be next week because at Arsenal you are at the top and the competition is tough.”

But he had previously expressed his disappointment at spending so much time on the bench.

“The bottom line is that I’m not playing enough games. I haven’t been given enough opportunities.

“I scored the winner at Aston Villa and made a goal in the next game. But for some reason I didn’t get opportunities after that, even though the team had a string of disappointing results. But I still believe in myself and that I will play much more.”

It seems unlikely at this moment in time that Arsenal will pursue a permanent deal for Benayoun and at nearly 32 years of age he’s considering lowering his sights in order to play more football.

“My inclination at the moment is to sign for a mid-table team and play another two or three years.”

All of which is quite understandable. It’s far better to have a footballer who is unhappy about not playing than having a potential Bogarde on your hands, and whatever happens at the end of the season, he’s still got time to make a mark during this one at Arsenal.

We love them squad players

His experience and hard work would be useful, though…

Much rather have him than feckin’ Kalou!

Lad has done ok for us, despite limited time on the pitch. Good understanding of the game and decent passer of the ball.

Hope he finishes the season in style, and best if wishes to him when he leaves in the summer.

NOOOO I want him to stay! Let him play more Wenger he’s GOOOD! With Arshavin gone now he should get more.

I like Yossi “no jaw” Benayoun.
He’s a hard worker. I can’t see him staying on after his loan but good luck to him
wherever he goes, except against us, of course. If he did stay he would be a useful guy to have around.

What I like about Yossi is the way he leads the young players. He is a true professional and I would like us to make his deal permanent. I feel he will have a big say between now and the end of the season.

We’ve overplayed some players, like Ramsay, and underplayed others like Yossi. It’s no wonder we end up with either crocked players or the disaffected on the bench. We really need to get more from our bench.

I appreciate that some of our squad players are not good enough, but it begs the question: if they aren’t good enough, why are they there?

He’s got a jaw

““I scored the winner at Aston Villa and made a goal in the next game. But for some reason I didn’t get opportunities after that, even though the team had a string of disappointing results.” I remember very clearly Benayoun playing against AC Milan and us getting absolutely annihilated with him doing very little. So I can’t support him on that one. But, as much as I was dismayed to see him start against Sp*rs, he proved me wrong, and I was later shocked to see how little praise he got after the game. He was nearly man of the… Read more »

you remember wrongly about Yossi playing at AC Milan.
while he made the bench he didn’t play.

He was rushed in during that mad spell before transfer window closed and
if we had no injuries or players on form he probably would have only played
Carling Cup.
I like him as a player but with a full squad available next year he is unlikely
to get a look in.
Hope he plays a part this year and wish him well for the future

Mmm, would be sad to see him go, he’s a good player to have around. I can’t understand why we haven’t played him more considering Ramsey is still learning the ropes. Yet another confusing managerial decision.

Obviously we shouldn’t be paying large wages for him anymore – we need to save that wage bill for our superstars like Djourou and Almunia, obviously – but he’s proven he’s a capable player who fits into our lineup nicely. Have a nasty feeling we’ll be letting Tomas go in the Summer, so the more experienced midfielders we have the better.

The effect he’s had on the team in general is enough to keep him. If we let him go I think its a mistake personally.

I like the lad and I think he should have played a bit more this season, especially in the games where Ramsey looked jaded. He’s a good professional and can do a job as a squad player for us but I wouldn’t want us to sign him permanently. It’s likely he will go to a mid table club. If West Ham come up my money would be on them trying to get him back or Pardew signing him up at Newcastle. Either way I think there are many mid table clubs who could benefit from his services and I’m sure… Read more »

I htink he has been vastly underused by Wenger. Whenever he has given a chacne he has been pretty decent. I would give him a perm deal. A very good squad player to have.

Benayoun with a perm? *shudders*

Would be very sad if he left – good player, always works hard, experienced, team player – a lot of qualities that we’ve been missing in the past few seasons.

Although with a healthy Wilshere, we might not feel his absence too keenly, and we do have quite a number of experienced, older heads (Arteta, Mertesacker, even Santos and hopefully RVP!) to add to the likes of Jack, Aaron, Theo etc.

For all his career i have seen in England it looks like he has been much appreciated by fans but not by his team. Every club he goes too the fans say a nice word about him and he has got skills plus hardworking, tackling guy but somehow dont get picked for matches. Well i would like seeing him play more till the end of the season and come May Arsene will decide.

Sell the over rated Ramsy who is just another over paid over rated youth flop that has destroyed arsenal every time he comes on and sign Benayoun !
Keep Rosicky, bring back jack and one more experienced quality midfield.

Ramsy is just a joke that needs to go to ‘Denilson r us’ academy for his future.
The sooner emotional arsenal fans wake up and realise this, the faster we can get rid of that welsh prat !!
An insult to football and arsenal !!
Ramsy is so useless he makes Denilson look good.

Under the Crossbar
Reply to  Haley Adams. True goonerette.

Hell, let’s sell all of our players every time they don’t perform well in a string of matches! That’s sure to encourage the ones we’ve got! I mean, if we’d sold those tossers Koscielny and Song we’d be much better off! And that Robin van Persie chap, sell him, he had a long period of injuries! Shit, while we’re at it, let’s bring in players we’ve seen once or twice. They’re the best goddamn players in the business! But really, fuck Aaron Ramsey. I can’t believe how badly he plays! I mean, except for that one time he came on… Read more »

Poor guy, should have been here a long time ago.

its a shame – i like him – pitty he went to liverpool when we tried to replace pires with him.

He was thinking to himself ‘Great
another game arsenal won’t win when
I am ref’
Little did he know that matters were
going to be out of his control .Bet he was really cheesed off.
Did you notice him before the game
laughing and chatting with the Spud
players.
Dowd should be checked out as being
to fat to referee although we do win
some games when he refs

Hmm.. Mid table teams.. That means there might be some off chance that we can see him in the Sp*rs kit… That would be a pity.

I can just see him on his first day in the Sp*rs dressing room now, giving a high 5-2 all their current players.

Seriously though? It’d be about as popular at Three Point Lane as our signing the diving chimp would be at the Grove.

stay here benny.you have rosicky with you and you guys make a great couple on the pitch.xD

[…] around the other news and Yossi Benayoun says he’s frustrated at not playing more often, which I can understand and which is a good complaint from a player (for the most part). Anyone who […]

[…] was shipped back to Russia with love. Yossi Benayoun recently voiced his frustration about his lack of games at […]

While Ramsey was exhaustedly slogging his way through games, often playing terribly, Yossi would have been a very decent option. Most fans over the past few months have said “give Yossi a game” at least once… I don’t really know why Arsene hasn’t, but I suppose Rosicky has come good in the meantime.

Thanfully, Ramsey who – in Wenger’s words about Jack – has been “playing in the red”, hasn’t suffered too much as a result of being over-played. Or has he?

[…] around the other news and Yossi Benayoun says he’s frustrated at not playing more often, which I can understand and which is a good complaint from a player (for the most part). Anyone who […]

Bould in, and he’s the right man for the job ‹ Arseblog … an Arsenal blog

[…] us next season. He’s 32 years of age now, Chelsea will want a fee for him, and he himself spoke about ‘dropping down’ to a mid-table team in order to play more regularly. He’s made a decent contribution this […]