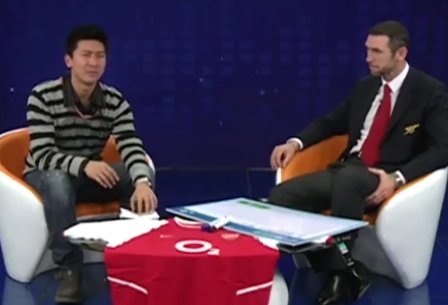 Martin Keown is currently travelling around the Far East with the Arsenal marketing and communications team as the club finalise details for their summer tour.

Having already played an active part at a press conference in Hong Kong announcing the friendly with Kitchee FC, the legendary centre-back, appearing very comfortable talking to the media as an ambassador for the club, has also spoken on television in Beijing.

Answering questions from Chinese Arsenal fans, the ex-England defender gave his view on the Robin van Persie contract situation making clear that the Dutchman was an integral part of Arsene Wenger’s set-up and not a player the club could afford to lose.

“We have to keep him. We’ve lost of course Fabregas and Nasri last summer. The team has done very well to adjust.

“It’s interesting to see how he has developed. I was at the club when he came as a young man and I think the captaincy has given him something extra.

“He’s a real figurehead for the team and we can rely on him to score. He’s our Messi.

“He scores the goals, which are really important for the team. It would be a backwards step to lose him.

“I can’t imagine he’d get the same adulation if he went anywhere else – the Arsenal fans love him and they recognise now that we need to get this [contract talks] sorted out.

“Maybe it’s linked to how successful the team is going to be, but he certainly looks happy at the moment. He’s in great form.”

It’s great to see Keown sporting the club blazer and speaking with such passion about The Arsenal. That a popular figurehead of such importance to the club’s recent history has been drafted in by the Gunners hierarchy is not only a great marketing coup as the Arsenal brand expands in the Far East, but also a vital step in ensuring that traditions are passed down from generation to generation at the Emirates.

As for his views on Van Persie – it’s clear to see the man thinks not just as an analyst of the game, but also a fan. Let’s hope the captain heeds his call.

Thanks again to @SiuFay for the video link.

Gutted that I missed Martin when he was in HK. Would have loved to have seen him while he was here. I love his passion on the field and his intelligence off it.

We need more of this from the Arsenal legends. Well said Mr Keown

I heard that RvP will play in this friendly even if Netherlands make it to the final , that’s retarded and Krul

They probably could have got a more up to date shirt on the table!

Maybe it’s one of Keowns own shirt, from back in the day. Only explanation i can think of.

Martin Keown does analysis on Irish TV, and unlike the run of the mill pundits, he is genuinely insightful. He is always worth listening to. And – unsurprisingly – he is correct about RvP – we just have to keep the guy. He is more than just a world class footballer, he is also a world class Gooner. RvP should be tied to the club, not just for his playing career, but forever. Seeing Patrick Viera described as ‘club ambassador’ for Man City still makes me gasp in disbelief. We all have to make a living, but what is the… Read more »

I’m guessing something along the lines of; “Christ this is a shit job, but it pays really well……..”

lee dixons quite good too actually

Enough with the Krul puns already.

‘We must keep our Messi’. I thought Messi was a midget who scores often in a near flawless team, while Persie is a scorer, model, leader, clown (Krul knows) and all-round genius.

Great to see keown getting involved with the club on some level.

He has matured a lot since his scary action with Van Nistleroy although I
still love that clip.
When dealing with Dutch opponents “You have to be Krul to be kind in the
right measure”

It’s funny to see that, had we progressed in the CL, we’d have gotten that Iberian team yet again. That makes Rvp’s “miss” all the more annoying…

Arsenal is full of legends, thanks Mr. Keown

so what is he become an arsenal rep? quality! Him, adams and co. slowly making their way back home eh :’)

[…] are a couple of interesting bits from Martin Keown over on Arseblog News. He talks about the importance of Robin van Persie and how he believes that Arsenal’s first choice back four is as good as any other in the […]