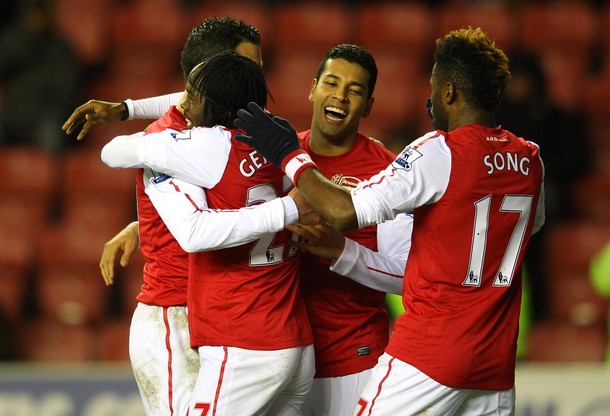 While one Brazilian seems desperate to stay away from London, another can’t get enough. Despite being injured for the last four months Andre Santos has confirmed he’s having a blast in the capital and now hopes his return to action will see him help the club ‘make history.’

A late substitute in Saturday’s win over Villa, it looks more than likely that the summer acquisition from Fenerbahce will dovetail with Kieran Gibbs for the rest of the season as Arsene Wenger rotates two players who’ve spent prolonged periods on the sidelines.

Pleased to be back in action the 29-year-old left-back told Arsenal Player about his adaptation to life in England:

“It is fair to say that I have totally adapted. I feel very well, people here have received me with open arms, and I mean everyone, the Club, the staff and the fans.

“People recognise me on the streets and ask for photographs, people have great respect and charisma and they make me feel at home here. I’m super happy, I’ve adapted and now all I want is to make history with this club.

“The Premier League is something different – it’s the best league in the world. It’s hard to play in, the pace is different, the fact that almost every pitch is wet makes the ball run more, the tackles are harder, and it’s just really good.

“I’m not saying that the Turkish league is not good, it has quality as well, but the Premier League is different from anything I’ve ever seen.”

Presumably coming from a place where people steal candy from babies, drown kittens for a laugh and take pleasure in watching Spurs win, Santos also revealed his surprise at how people had wished him a speedy recovery after he rolled his ankle against Olympiakos and was forced to undergo surgery.

“It was a big surprise how people accepted me here,” stated the Brazilian.

“Especially when I was injured, a lot of people supported me and they were always asking when I was going to come back, saying that the team needs me and wishing me well.

“In the stadium people would see me in the stands and ask me to come back, there was also many ‘Get Well Soon’ messages on my Twitter account.

“All of that gave me the strength to carry on, and it all just contributes to my desire to work hard for this club and win titles in the red shirt.”

Safe to say he’s having a gay old time of things at Arsenal.

Come join me in Bonds Jeep for some gay old time, Andre!

Before his injury , he was playing exceptionally well. So well in fact, that if the whole team played that well, I would care even less if there were all ‘happy’ fellows.

I guess he is 28, not 26. Nevertheless, a legend in the making. I’d prefer him over Gibbs anyday.

I do understand Arsene’s reluctance to change a winning back four though. Can he start as a winger maybe?

he clearly started enjoying things more when he was playing with the Coq, especially those surging thrusts from the back

Santos nice 2 b bk, i wish u injure free season as u wil work hard to established at d bk line God bless

no need to hate. we are not all native english speakers.

What does native English speaker have to do with being to lazy to push the proper keys on a keyboard? Twat.

Its the poor sentence structure which is why you can’t read it. Camilla was equally lazy when it came to writing the full word. no need to be a dick frog, thats not why we are here

hmmm he is not 26 ? he celebrated his 29 birthday days ago

I’d do anything to be a fly on the wall in that dressing room full of Arse gays!

Last week was the first published post using Delicious to maagne links for my Sunday links post. a0I used a javascript from Delicious to insert a certain set of tagged links and their notes.

As long as Gibbs stays fit I say stick with him. I would like to see Santos come into games later on on the wing. He could provide extra protection but also is great attacking.

Not a bad point mate

Gibbs is a much better defender, but I like the look of Santos going forward.

And I’d advise him to stay away from Old Compton Street.

I don’t think Santos is particularly a worse defender, when he’s there he tackles well and his anticipation is good but it’s just his lack of sheer athleticism, when that’s an important trait for an Arsenal full back (3 out of 4, great athletes with Santos the odd one out) that counts against him. I’d still stick with Gibbs though, the guy has great potential imo and if he stays fit can contribute a lot to us.

I’d be happy to see Santos out on the wing on occasion, he’s Brazilian after all.

the only sam is nelson
Reply to  Dick Swiveller

he did create what was arguable villa’s best chance on saturday just after coming on, think it was his first touch

on the bright side, he’ll improve working with such a brilliant defensive unit at arsena… oh, wait

Without trying to show my complete lack of knowledge, could we not try Santos out on the left midfield, with Gibbs playing behind him? It’d be useful to be able to play him either as a full back or as a winger, a little like we used Eboue on the right. Adds a bit of versatility and means that we’re less screwed when the Shawcrosses of the world come a’breaking legs.

Be nice to at least try it in a friendly in the off-season, see if it works.

that will be like putting your baskets on one egg , The reason we bought Santos(a very good LB) is because Gibbs is fragile . They’ll rotate .Playing them together is suicidal

Also, we have Oxlade-Chamberlain and Gervinho. Rather impossible at certain times for Walcott to be taken off.

And if Arsenal actually sign Hoilett (I know, only transfer rumours), added in with Podolski, Wenger will have a real selection headache

We won’t sign Hoilett, we have enough talented youngsters who need to work on their consistency, Miyachi over him any day of the week.

Agreed, but I still think we should try it in a friendly, it might just work. We always seem to be cursed with injuries to specific positions, so we’ve had our full back crisis this year. Knowing us, we’ll be short of wingers even if we’ve got eight of them. Not suggesting that this is something we look at all the time, but it’s extremely useful to have someone with versatility on the bench – say if we’re playing a league match and we have no-one else who can play on the left wing after an injury, we could throw… Read more »

Don’t forget that the Coq is versatile and can fit into many different holes. A new Eboue. He even has the crazy fake injury thing down.

Well, he did get better a short time after Frimpong shared that picture with the Verminator… I know it made me feel better 😉

personally i hope that when the first superstar footballer feels comfortable enough to come out publicly, that player will be one of ours it’ll make me proud that we’ve got fans who aren’t scared of homosexuality, it’ll make me laugh that brighton will be totally jealous, it’ll make the travelling retards from spuds and chavs look even *worse* when they chant sick shit, it’ll make dalglish angry because we’ll cane some excellent kit deals off the back of it… what’s not to like? oh, and it’ll mean window lickers like ibjongos piss off and support dirty leeds or millwall where… Read more »

heh, that really doesn’t make any sense now does it. ah well.

Camilla
Reply to  the only sam is nelson

Pique and Ibrahimovic almost beat us to it. I think Cesc promised to move to Barca just so they wouldn’t come out before one of ours did.

TAMCK
Reply to  the only sam is nelson

Are you saying Nasri wasn’t the league’s first lesbian player?

No, he’s just saying that Na$ri hasn’t officially come out as a lesbian.
Which is true.

I have also heard it said that he’s a cunt. Probably worth mentioning that.

I love all you gays,

“Presumably coming from a place where people steal candy from babies, drown kittens for a laugh and take pleasure in watching Spurs win..”

This made my day 😀

Good to have players with hearts rather than only mouthsn like that stupid cunt(nasri).

Glad to have a cheerful happy player like Santos (unlike that Cunt Na$ri). He seems like a great guy to have on the squad, one who’ll add that little bit of fun/pranking to keep everyone on their toes and enjoying themselves while remaining serious about the task at hand. He’s great when he gets the chance to attack. I love that we can do well with either he or Gibbs in the role. Nice to have that “problem” for once! Also, don’t know who all has heard about it yet but Barcelona have lodged a formal compalint to UEFA about… Read more »

The pitch at the San Siro was ridiculous and it took the enjoyment out of what could otherwise have been an interesting match. It killed Barcelona’s game just as it killed ours. I don’t know what UEFA can do about it but the complaint is legitimate.

I watched some of that snoozefest and I have to say that it looked like a ruddy billiard table compared to the state it was in when we went there.
The sides didn’t look like they been recently ploughed and then hastily re-turfed for a start.

Also, is Milan’s manager channeling Sam Allerdyce? 10 men behind the ball, kick lumps off ’em and only go forward on the break is straight out of his book of tactics.

Cannons of Rhetoric
Reply to  Nick

From what I’ve heard Mertesacker is the biggest prankster at the club! Maybe Santos is his henchman? I’m loving the atmosphere around the club and I would suspect that comes from the older, more jovial but focused heads we signed last summer.

Santos is pictured in FourFourTwo this month with some Brazilian kid, Lucas, that Chelski have signed – going on about how he loves eating the great food in London, Brazilian style steaks etc.
I really like the guy but he looks like he’s quite fond of his food 😉

[…] Andre Santos says he’s been blown away by the support he got from Gooners when out injured. He said: In the stadium people would see me in the stands and ask me to come back, there was also many […]

His name should be “Andre ‘Where the F*ck did he Come From?’ Santos”.
Ask Chelsea. That’s what they said when he scored against them.
I think we going to see a lot more of that, Santos, suddenly arriving in the opponent’s box and scoring. Arsenal win again! Yipee!