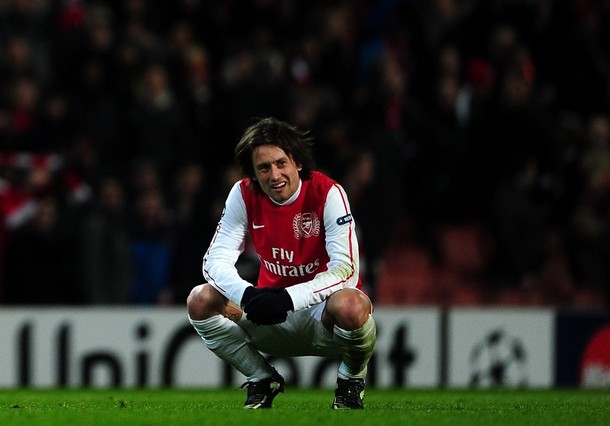 Tomas Rosicky has revealed that he and his Arsenal midfield cohorts aim to win the ball back from opponents inside three seconds in a bid to optimise pressure in the centre of the park.

The Czech international, who has had his most consistent season since joining the club in 2006, has been fundamental in maintaining the Gunners’ high tempoe pressing game and believes much of it has to do with the versatility of teammates Mikel Arteta and Alex Song.

Speaking to the Arsenal Magazine, the 31-year-old stated:

“The balance we have looks great at the moment and the midfield complement each other very well.

“Mikel and Alex may start behind me on the pitch but they’re both very good in the attacking phase, so it’s not that we have a defensive midfielder, a central midfielder and an attacking midfielder.

“We’re not rigid, we often alternate and I sometimes even cover for those two. We can all play forwards but we can all defend, and this is equally important.

“I count myself in that, because if I’m the highest one of the three it means I’m the first to start the pressure. What we’re doing very well at the moment is that, when we lose the ball, we begin pressurising immediately.

“The three seconds afterwards are vital and I think we are all aware of that. When the opposition get possession, we’re after them immediately.”

It’s a style which has most notably been refined by Pep Guardiola’s all-conquering Barcelona side in recent season, and one which despite fleetingly showing its head at the Emirates has not been as regularly on view as many would like.

Recognising the need to play with consistency, Rosicky continued: “It’s something we are trying to stick to – when you lose the ball, try to win it back straightaway.

“The possession stats against Manchester City are a good example, it was 65 per cent for us and that was because we kept getting the ball back. It’s important tactical stuff and we are doing it very well.”

Arsene Wenger will of course not be able to call on the experience of Arteta for the final games of the season meaning Aaron Ramsey, Abou Diaby and Yossi Benayoun will fight it out for the right to play in midfield alongside Rosicky and Song.

Arteta: If we enjoy suffering, we’ll be rewarded

Arteta: Win gives us a lift and momentum

Start Diaby against Stoke for his height and ball retention abilities. + He’s good at driving forward.

Bring Ramsey and Ox off the bench for Benayoun/diaby at 60-70 mins.

And it’s exactly this sort of ‘analysis’ that annoys me. You’ve already decided on what substitutions Wenger should make irrespective of how the game actually pans out! ridiculous!

Did we get a new couch?

Did I miss something here?

No, it’s sofa so good with the old one.

I like this Jose Ozorio. He has exactly the kind of temperament and authority we need to see the team to silverware!

Just keep Diaby away from our goal in their set pieces. That own goal at Old Trafford years ago shows what Diaby can really do with his height.

I’m not Diaby’s biggest fan but I would be protective of him in this moment. He played what, 30 mins this whole season? We cannot expect anything reasonable, let him come back gradually.
I still think Ramsey will be starting.

Although I still think that, when playing cunts, we should introduce the Coq 😀

Yes… lets bring on the coq.. he’s our best replacement for Arteta right now. Better @ passing than Diaby, more pace and a good outside shot! It can work. But I really like diaby’s skill on the ball, though sometimes he holds on to it too long. If he plays disciplined and runs back in defence, then we could have the best of him. Last few times out he seems like he’s concentrating really hard on the field. That can only be good for us.

Will be interesting to see this at Stoke.

I would love for us to win at the Britannia. And escape injury-free too. And if I can dream further, Ramsey to get the winner, deflected off Shawcross.

Indeed, lets hope that the cavetroll Shawcross gets his nuts cracked.

By the way, if Aaron Ramsey really kills celebs with his goals and he does score, can he take Piers Morgan this time? I’m ashamed to have anything in common with him.

imagine if diaby walks out of the tunnel with a bionic leg, and scores 6 goals. and when he raises his shirt in celebration, we can see ” will never get injured again. “<3

Not quite as good as Barca’s 1 second rule.

If we can consistently use this tactic and stick to it, it might be the template for an all-conquering side
Hopefully we can win the last 3 games of the season

This three second rule, is it in their imagination or have they ever put it into practice. Song takes three seconds to move 2 yards.

Pressing really high is the attacking player’s job ,I think . Song should stand off a bit , Him going in a tackle very quickly like Rosicky can be very suicidal ,him missing a tackle exposes our defence ,While if Rosicky or RvP misses a tackles they just pick themselves up and go running again.

I learned most of that in Football Manager

Why is the cunt named Adma always commenting on this blog, there are plenty Spuds blogs out there and I hear they really enjoy dumbass sub-humans spouting off the kind of pathetic wankery you seem to be an expert in. Fuck off troll

Anyone else think strechy(aka chamackh) may be a good bet to play this match for height reasons?

Good heavens no. Wenger is better off playing a garden gnome upfront. Might get a deflection or something.

wouldn’t make much sense fighting fire with fire. Their centre backs are twice as tall as Chamakh. I prefer having Gervinho and Ox bending their spinal chords.
leave the physical stuff to them and let’s attack with the ball on the ground, which is what Arsenal does best.

It doesn’t seem like they’ve perfected it yet. Against Chelsea, it looked like they had a lot of time on the ball, with the odd one or two players trying to close them down, which then leads to gaps behind them.

If Arsenal are going to play the high tempo pressing game then it needs to be a collective effort and I don’t see that mentally installed in all the players yet.

I think we were pressing terribly that day. Song and Ramsey didn’t seem to be working together at all.

Honestly, we would have had a magnificent midfield trio (Rosicky, Diaby and Ramsey) had they all never been injured that badly. All very talented and very hard working.

But then again, the addition of Song and Arteta is also great. Either way, they all supersede Nasri.

Keep it up Tomas!

Just noticed that no less than 3 of our central midfield players have had their legs chopped right off (ok, maybe not Rosicky). Could’ve been 4 if Balocuntelli had had his way with that GOD-AWFUL tackle on Song a couple of weeks back.

Diaby , hardworking? Gimme a break, more like runs whenever he wants. I know the whole formation above mentions the switching and no player is confined but come on Song, that doesnt mean ya should be doing it all the time.

Rosicky certainly works very hard to win the ball back quickly, it’s being noticed by the fans and appreciated. I don’t know whether it’s because he plays a more forward role but he seems to do it a lot more willingly than Song. Just a thought.

I can only dream of a 3 second rule……just ask the wife!

3 second rule is cool. I would like to see the midfield contribute in scoring goals

Rosicky absolutely flies around the pitch sometimes. Benayoun as well. Nice to see some commitment to winning the ball back.

Ramsy uses the 56 second rule. And any moron who supports Ramsy should be hung !! Death to Ramsy is a dream to all arsenal fans !! Ramsy should be raped, tortured, abused, chained, raped again and burnt alive. Then buried alive. Hole all arsenal fans watch live on huge screens applauding !! Luckily with a big chance arsenal buying a midfield , Wilshire back, Diaby ready, Rosicky in form and Benayoun staying all means Ramsy the cunt will be sold, loaned or bench warning where he deserves !!! The fuck useless shit. And anyone who thinks this shit is… Read more »

True Goonerette my arse! You are a disgrace to our club. No do us all a favour and fuck off

you sir, probably dont even hate ramsey that much, youre just an extreme case of an attention whore who never got enough time of his parents day and goes to blogs to spread shit around and read all the comments and replies so you can feel important for 5 mins in your pathetic life, i truly pity you.

He’s not British you dumb twat. I think your parents really made a grave mistake by letting you go on the internet, you’re clearly not grown up enough to handle the responsibility. By the way, next time you’re wondering why everyone in your life hates you just think back to this comment and the repsonses to it. See a therapist immediately. You really need to find the root cause of why you feel the need to make people abuse you, my guess is some sort of traumatic event like your dad touched you inappropriately or maybe you’re just such a… Read more »

By the way That was directed towards haley adams a.k.a Tottenham Hotspur #1 Fan; a.k.a “the reason sexism towards women exists”; aka “Patient 0”

Although I disagree with that cunt hugely, welsh is British..

Are you retarded? Ramsey had better stats than David silva in proportion to the amount of game time he’s had + he’s 21 he’s got all his best years ahead of him him the coq & wilshere will destroy teams for years to come COYG

You sick fucker, you cant even spell the lads name right you wanker now fuck off because your no arsenal supporter PRICK

that is precisley the reason why we are good when we have benayoun in addidtion to this trio.in big games having posession is very important and when benayoun plays he too like our little mozart works his ass off in ball retention.
the best trait in both these guys is they can retain it by that amazing kung fu- ‘slide’ both of them are capable of doing and MY GOD rosicky does that to perfection.

wouldn’t make much sense fighting fire with fire. Their centre backs are twice as tall as Chamakh. I prefer having Gervinho and Ox bending their spinal chords.
leave the physical stuff to them and let’s attack with the ball on the ground, which is what Arsenal does best.

Please don’t play Diaby in this game….what if they break him again? He’s too brittle for these thugs.

Bring back frimpong on one leg to dish out his specialties

At Stoke, I say we arm the midfield with machetes and let them have at the clogging cunts.