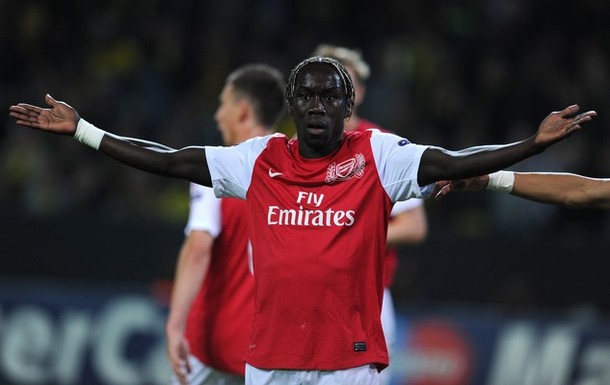 Bacary Sagna says he is flattered by Arsene Wenger’s belief that he is the best right-back in the country, although he insists he only looks forward and not back – thankfully he’s not talking literally, otherwise he’d not be such a great defender.

The French international, who missed four months of the season after breaking his ankle against Spurs at White Hart Lane, has been a fundamental part of Arsenal’s revival since February netting a vital goal in the North London derby and providing a solid platform for Theo Walcott’s end of season renaissance.

Speaking to lyonne.fr after Saturday’s 0-0 draw with Chelsea – a match which was his 200th for the Gunners – the former Auxerre man reflected:

“It’s flattering. At the same time, my goal is to be the best. It’s hard to critique yourself, but I was voted best right side of England twice in four years. This is quite satisfactory. I hope to strengthen my position even though I was injured this season.”

Pinpointing the key to his success, Sagna made clear that being mentally tough was key.

“Especially [strong in] the mind,” he continued. “This is what makes the difference with other players. I’ve never asked any questions. I’ve always looked ahead, trying to reach the next level.”

“I am now ensconced in the club, it is much like Auxerre but larger, in the sense that it is a family club and very very open. In the four or five years [I’ve been at Arsenal], I have also acquired a taste for London life.”

Strangely, despite being ace, Sagna isn’t nailed on for a place in the France squad for Euro 2012. Having been out injured for so long, manager Laurent Blanc has been very open about testing new blood in the full-back positions with Sagna now having to mount a late charge ahead of the UEFA showpiece tournament in Ukraine and Poland.

He doesn’t seem that fussed though, nonchalantly stating: “I hope to be on top in time, even if the hierarchy was a little upset during my absence.”

Let’s be honest. You’d be a brave man to take his place.

Cheers to @SiuFay for the heads up on the interview.

Three youngsters leave as academy looks towards next season

Osei-Tutu finishes loan at VfL Bochum on a major high

If he hadn’t missed half the season through injury, he’d easily have beaten that overrated Sp*rs cunt to PFA team of the year right back.

doing a good job of that bac

I love the Bac, he´s a top defender.

I´d feel sorry for him, but at the same time not mind at all if he doesn´t get to go to the Euros.

A fully fit and rearing to go Sagna for the next term please.

He scored the most important goal of the season, imagine it didn’t happen.

When the history of St Totteringham’s Day 2012 is written, he will loom large as the catalyst with THAT goal.

hands down best in the league, only one who even comes clos is Richards, and a true Gooner too we need to fill our squad with players with the same commitment and determination as him.

he is the best in the league by a mile.he has the attitude and the consistency.i think bac has a very long way to go. he needs to get more international experience under his belt like our BFG.he needs to be playing in top euro and worldcup clashes and face the best players. at arsenal he takes every chance he gets and that is the reason he is top class and im sure he will take his chance in the national team and that can only be good for arsenal especially in the champions league matches.but,french football is fucked up… Read more »

The Iceberg that Sank the Tottanic.

Bac is already the best. If he were any better, he’d be DB10.

Sagna is great, but in the last 2 games he hasn’t looked to sharp. Against Wigan and Chelsea he was beaten numerous times. Perhaps it’s fatigue setting in?

Everyone loves Sagna (myself included). How comes he doesn’t have a song?

Even Chamack has one!! Feel sorry for the dude, he deserves his name to be sung from the terraces!

The sagna song has to have a phrase on him killing the enemy.
One way or the other he started the downfall of those twats

He does, it goes “dodgy hair, we don’t care, Bacary Sagna”. Although I’ve not heard it for a couple of years…

Some sing “All we need is Bacary Sagna” to the tune of Radio Gaga, by Queen.

I tweeted to Arsenal Chants, but they didn’t say anything. Maybe it wasn’t that good, or they don’t know the song 😛

The guy is near perfect. If he figures out how to score directly from those kick outs from Szcz then he will be there

i just want to say that the only thing i don’t like about bacary is the no.3 on his shirt

he really needs to steal diaby’s shirt. then abou needs the 4 off the BFG.

still at least it’s better than when gallas had the fucking barefaced cheek to take the no.10 shirt. i still shudder just thinking about that

I wouldn’t have any right back in the world over Sagna, I absolutely love this guy, I hope he stays with us his entire career!

That header vs Spuds.

Bac your the tits, in a good way.

Been my favorite player for a few years now. 100% commitment every time. Can’t ask for more than that.

“I was voted best right side of England twice in four years. This is quite satisfactory.”

Since no one else did it, I will.

Gotta love Bac…anyone who refers to Enfield Town as ‘the enemy’ after THAT 5-2 drubbing is all right by me!

Simply the best in the world no doubt, but against Wigan, he was not @ his best.

Best in the world…

“This is quite satisfactory”

Something about that… I don’t know what it is, but I love it! 😀

I wanna be the very best, like no one ever was…