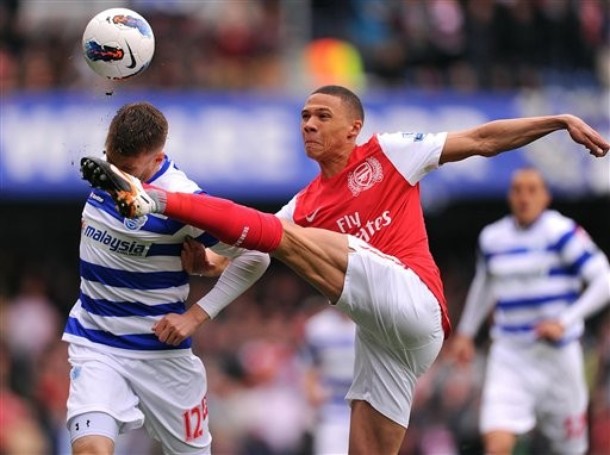 Arsene Wenger has confirmed that Kieran Gibbs will miss tomorrow’s Premier League showdown at Wolves with a tired crotch.  The England under-21 international will be joined on the sidelines by Gervinho, still suffering from an ankle knock, although the boss was unusually quick to rule in the possibility of a return to the squad for both Ju Young Park and Seb Squillaci.

Speaking to Arsenal.com, Wenger gave an update on the status of his squad:

“Gibbs is out with a fatigue of his groin, so Santos is back. Koscielny is of course suspended for two games and Gervinho is ruled out with an ankle problem. Squillaci and Park come in. The squad is quite easy to pick because all the players available are in.

“Gibbs is short-term, it is more fatigue than an injury. Santos comes straight back.

“Gervinho is short-term as well. He had a test today which was not completely satisfying but he is not far.”

Arseblog News relayed reports from Germany earlier which claimed that Per Mertesacker could return to training later this week. Asked about the progress of his German international, the boss played down an imminent return stating: “No, no, no, he is still in Germany for his rehab and he is starting his running but he is not back in training. He is fine though.”

I want to like this, but the anti-masturbation advice is tough to take.

Gibbs is hurt again? WENGER OUT!!!!

I blame the Board

Blame it on Eboue.

I blame the bossa nova.

Maybe the Coq frimponged him.

It was not Dench.

Fatigued eh? Probably pulled it with the missus in some post citeh ‘celebrations’

The “cuddly maverick” gets the nod.

May he run about and shush other annoying players in the League.

If Wolves played like gays, we have the right gay to punish them and score.

Oh well Santos will do , we will be fine gays

I really like watching santos play, and on top of that he seems like a nice gay

He’s humble and works hard. Doesn’t make much out of himself. He’s just another gay in the dressing room, it seems.

[How far can we take this joke?]

What joke? He’s a good gay, they’re all good gays in fact.
Apart from Nasree. He’s a cnut.

Nasri is a lesbian. He’s a different kind of gay.

oh..now I get it why he got this slick hairstyle

Happy with Santos playing, that’s why we have two full-backs for both positions. I mean, can you imagine what would happen if we had ALL FOUR full-backs out?!

now worries , we have a very versatile Coq

I see what you did there. I love Coq, he’s one of the good gays.

This gay is ok. Atleast he can take pressure at the back unlike some other gays like gibbs.(HAHAHAHA, GET IT?)

No problem with the gay coming in for Gibbs, he is jst as good. Imagine us having 2 effective strikers as we have left backs.

Not sure if I like our Coq more than our gays… :frystare:

“…Squillaci and Park come in…”

Nobody worried abt squillaci coming in?

Great photo. How many hamstrings does he have?!

Djourou is surely gunna play!? No disrespect to squid but his actually kinda garbage! Hope wenger doesnt start ramsey on the wing! I like the las and think he has lots o talant but his just wasted out there! Chamberlain to start from the off! It is wolves surely he’ll get a game!

That’s what I predict, which isn’t too difficult to pick! I think some could use a rest, but they don’t play again until Monday so I think it will be the usual suspects.

shouldn’t be playing so much with the Coq

The is the right gay for the job.

Santos on the overlap….
Chase me, chase me !

[…] terms of team news there will be changes at the back. Kieran Gibbs groin is feeling the strain of 9 consecutive games […]

Damn. Check out the definition on Gibbo’s quads/hamstring. First Pires, then Arteta, now this!?

Like how come of you gays still put Santos at left back. I guarantee you he will be up front 90% of the time 🙂

Santos is good enough only the midfielders need to cover him when he overlaps. He is a good attacker with great passing ability.

I’m pretty sure this gay will attack well from the back. Just a feeling I get, is all.