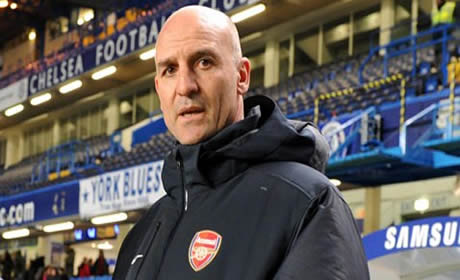 Steve Bould will this week be confirmed as Arsenal’s new assistant manager.

The youth team coach will replace the retiring Pat Rice and will take his seat alongside the boss from next season onwards. Many will hope that he can bring some of the defensive knowledge he learned from George Graham as part of that famous back four to the training ground.

His former back four colleague, Lee Dixon, feels it’s crucial that Bould be allowed have an influence over the training regime.

“If he’s brought into a position in the first team set up then he has to be allowed to to do his defensive work,” he said, “otherwise there’s absolutely no point.

“There’s no point bringing in anyone who is just going to go down the Arsene Wenger way because it’s clear over the last few years that hasn’t worked. I still think Arsene is the right man for the job but I just feel he’s lost his way a little bit and needs some help.”

Bould has spent over a decade at the club in a coaching capacity and has worked hard to develop his skills. Although he said recently he didn’t want to move into management, a new role as the assistant allows him to progress his career and for Arsenal to freshen up their coaching staff.

Bould will be joined in first team action by reserve team manager Neil Banfield who will join Boro Primorac as a first team coach.

great news, its about time we did something about our defense or the luck of it

*lack, sorry mate, had to be done
who replaces bould then? He was doing a great job with our under 18’s!

Bould was manager of the U-18s right? And Banfield managed the reserves. Any news on who will replace them?

So who will be the reserve team manager and u18 manager? im hearing talbot and morrow?

If SB is allowed to sort out some of the problems we experienced all of this season
next season could be amazing.
Some of the errors this year have been unacceptable.Too much dwelling on the ball,
not tracking back,poor marking and trying the
spectacular rather than the sensible.
AW/SB sort it out and we can fly next year.

Why is my name required
Reply to  Runcorn Gooner

Attack = (Wenger) is the best form of defence = (Bould)

Neil moving up is the only plus, otherwise triple meh.

Make that a quadruple ‘meh’ if you include the one I’m throwing at you.

The invincible arse
Reply to  Xav

You are only an ‘i’ away from being Xavi.

Wengers’ inner circle continues……..neil though seems the fresh one. yes?

Great news. Not only is Bouldie a defensive legend, he is also a massive character. He is big enough to tell Wenger to shut up and listen.

I hope Henry and Tony Adams take over the reserves.

Lol just read this: tribalfootball.com/articles/barcelona-will-consider-offers-all-seven-current-squad-including-cesc-pedro-3157471…………………..guess what people, cesc is up for sale!!

Didn’t we insert some cheeky buy back clause in the sale agreement?

Uh that would be a hell yeah! we did

Good to see some changes among the backroom staff at last.
If we havn’t done so already, I suggest we recruit a Sports Psychologist who might help to prevent the team from “choking” at the end of every season, as they have done for the last five seasons at least.
Part of the medical for any new signing should be to assess their mental state, to try and avoid adding any more players who can’t handle the pressure of chasing for honours (or 3rd spot) to the squad.

the only sam is nelson
Reply to  Mental Strength

amazingly we already have all of this in spades

youth teamers and new signings are profiled and tested for attitude and aptitude (this is apparently to ensure that we only recruit and progress “winners” through the system, would you believe), there is all sorts of professional help on hand, etc etc and so on.

Fatgooner
Reply to  the only sam is nelson

But is anybody testing the aptitude of the people who test the players’ aptitude?

Well done Bouldie, wish you every success. Sorting out our defensive problems is talked about in a magical way, as if only a truly wise man could do it. But if you go back to the start of Arsenes tenure, even the greatest back four in football history looked iffy when the central midfield pairing didn’t shield them properly. The difference was the defence let Vieira and Petit know in no uncertain terms what was expected of them. Can you imagine how they would have reacted to Song giving the ball away cheaply or Ramsey gently jogging after his man,… Read more »

Wait, why is it that a 100% signing (i assume it is) has less comment than the 99% (Seems so)? And i still think that this is one of our biggest signing yet, If it prove to correct or minimize the mistake from the back.
Anyway, good luck to Bould and the new first team coaches.

I am happy with all the news I am hearing this morning when I woke up. M’Vila deal almost done, Asst. Manager sorted. These are signs of a smooth season ahead.

To Bouldy go where no Yann has gone before | 7amkickoff

[…] then there’s the Steve Bould story. Arseblog wrote this morning that “Steve Bould will this week be confirmed as Arsenal’s new a… That bold of a statement from the well-respected Arseblog himself is as close to fact as we get, […]

I have an image of Bouldy ripping into the boys if defensive mistakes are made. He’ll sort them out

Great news. Great to have Bouldy on board.
Would be nice to see Keown step into the Reserves or U18s role now.

You would think that with the problems that we have had in the past defensively, that bouldy would have been brought to the first team squad at training sessions to help out.
Really pleased that he has got the job but not sure if it can solve our defensive problems as if arsene thought he could have solved our defensive woes then you would think he would have Been asked to help our with the first team ages ago surely..

Problem lies with midfield as well as back four. Look no further than Norwich – Song, two poor passes led to two crappy goals. If the rumours about M’Villa are true, then that acquisition and the promotion of Bould could make a huge difference next season.

so fucking happy for bould, and for arsenal football club.
next season is gonna be big.

Next seasons secret weapon – the near post flick on from corners.