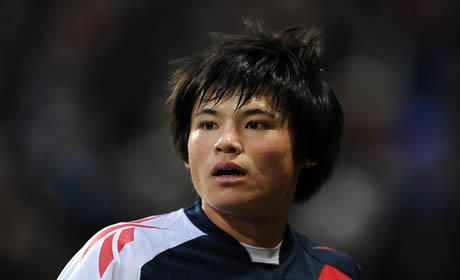 While there has been much debate over Jack Wilshere’s potential involvement with ‘Team GB’ for this summer’s Olympic football tournament, there are other Arsenal players who may end up involved.

Both Aaron Ramsey and Kieran Gibbs have been tipped for Stuart Pearce’s side while today it has emerged that Ryo Miyaichi is set to take part.

The Technical Committee of the Japanese Football Association will today furnish clubs with the necessary documentation asking them to release players for the tournament.

Miyacihi, currently on loan at Bolton, is unlikely to face the kind of opposition from Arsene Wenger he feels toward Jack Wilshere’s involvement. As he’s still learning the game this could prove to be a useful learning experience for him.

Since joining Bolton on loan in January, the Japanese winger has made 12 appearances for the struggling Trotters but gained plaudits from Owen Coyle for his performances.

“He shows unbelievable quality,” said Coyle. “He’s brave and he’s got an unbelievable temperament about him. I am just excited by everything. He continues to grow, develop and I believe he will have a big impact in his remaining games.”

His loan spell looks to have been a successful one but even that would only put him on the fringes of the Arsenal first team squad, therefore his Olympic call-up wouldn’t impact on our pre-season preparations too greatly.

The Matildas March On: Arsenal Women Olympics Round Up: Day Four

Ya except to be very cynical for a moment, going on an Asian tour without our big Asian star?

I don’t think we’re touring Japan though are we?

Yeah, the Chinese traditional hate the Japanese so if anything this would improve the turnout….if we’re being cynical

Also, if the point was the its easier for Japan to travel there the distance between Beijing and Tokyo is virtually the same as London to Marrakesh (or Liverpool to third place).

Your forgetting that Park is our big Asian star!

I fucking hate your gravator!.

After years of hating Bolton for their clodhoppery ways under Fat Sam, I must say I do like the way Owen Coyle helps with the development of our youngsters.

It’s a 2 way street obviously, but all the same, seems a good bloke.

Does add a whole new meaning to “Ocean’s Eleven” though

Yeah and I love the way he said “I’m just excited by everything” I had a dog like that once……..

He could repay the favours by mashing
the Spuds tomorrow night

they did a great job with jack, and I think he learnt loads there. it’s also great to get out of the comfort zone of our academy, and find out what life could be like if they don’t work hard enough for it.
only a positive thing.

Bolton actually plays some attractive football now with Coyle, its not the usual hoof it up to Kevin Davies (although last game they seem to have regressed) garbage that they played under Big Sam. I hope them and wigan stay up. I really hope aston villa go down just because McLeish is such a humongous cunt and they’ve looked terrible this season, even when they had Bent. Also really wish QPR goes down too, that would be hilarious with their heavy investment and that horrible twat of a manager they’ve got….and joey barton, thr most pathetic and stupid footballer since… Read more »

He’s a genuinely nice guy mate. There’s a lot of folk from round here – Burnley way – not the bfc fans strangely, that think a lot of him. He was very into the community and like you said he’s done good things at Bolton despite their league position.

Great news for Ryo. It can only help improve his game more.

Ryo’s had super work rate at Bolton, hope he brings that back with him.

yeah they seem to learn that at bolton, look at jack, in fact even some of our first team squad, cough “theo” cough ,could learn a thing or two about working hard the entire 90 minutes

As for our Streetfighter lad, good for him. It’ll do him good hopefully and fingers crossed he’ll kick arse for us next season.

you can’t honestly say theo works hard all game sometimes, can you northerngoon?

Apart from Rosicky can you say any of our players do?

It just seems to me that, thankfully only a small portion of ‘fans’ now, set their opinion on someone and then regardless of fact hold on to that opinion and refuse to budge continuing to spout tired old rhetoric at every given opportunity.

Theo always works its just sometimes he’s not always effective. The same again can be said for all the top talent bar a few. This season has seen a massive improvement in his work rate and delivery.

no im sorry but for me the stats dont matter,i look at the performances of each match and i have to say that a lot of the times all he does is contribute an assist or a goal then go downhill the rest of the match with sloppy passing and poor work-rate, and that leaves us almost playing like 10 men and gives the opposition to counter and get a foothold in the match, for me, its nothing personal but i think hes best used as a super sub, not a whole 90 min player. Hes a great player for… Read more »

This isn’t relevant but what does LANS stand for?

It stands for like a new signing, (e.g when a player comes back from an injury they are often considered to be a ‘lans’. This comes from Wenger who said this phrase quite a bit)

Love A Nice Sausage. It’s in honour of the BFG…..

After 0-1 Fulham even bigger pile of poo.Roy Hodgson you were well off out of
that place.their fans take the word deluded to a whole new level.Anyone but
Dalglish would have been sacked by now.

Fuck all this, who have we signed today?

I *demand* the signing of an obscure and youthful yet outrageously talented winger, spotted playing on the lower slopes of the Himalayas in the Tibetan League. Furthermore he must spend 2 seasons of purgatory on loan somewhere inappropriate in Europe before being moulded by Owen Coyle into a first teamer. Then Yetidinho will rule the Grove!

Enough of all this off-the-shelf experienced intenational goalscorer nonsense.

Touraine Gooner
Reply to  the only sam is nelson

Who is the miserable sod thumbs downing everyone? I challenge you to make me smile.

Woy fuckin ojson. I arsk ya.

I heard from a ‘source’ (my mate) that Arry didn’t get the job because Trevor Brooking hasn’t spoken to him since he did the dirty on his mate, Billy Bonds, to get the Weat Han job. Who’d have thought Arry can’t be trusted?

Ass fuckin outrayjus at is. Wod joo fink I am?

Arm a top clarse manija I am. Sort a dee erf. Neva tuckt anywon up me! U arsk jim smif.

Must really hurt missing out on all that six million quid a year.

the only sam is nelson
Reply to  Fatgooner

Isn’t it wonderful that the glory-hunters of Kent and Essex are now enduring an Arsenalesque collapse of their beloved Red Devils? Watching Man United blow an “unassailable” eight point lead is almost as good as seeing us take the title.

Yes, I don’t particularly like the Middle Eastlanders either – and it’s gonna piss me off watching the Lesbian with the Premier League trophy – but the sheer pleasure of slagging off my “Cockney Reds” colleagues at work is unmatchable.

Now if only WE could do that to United next season…

the only sam is nelson
Reply to  Fatgooner

agree, can’t understand why anyone wants the glazerhawks to take the title

citeh are still far enough behind for it not to matter

plus it’s a fucking worthless title as it was bought if city win it. one that can be easily dismissed.

utd winning it would represent genuine and impressive achievement with poor resources, something that makes the prospect even more appalling given the gobshite cockney reds around

blimey did i just agree with fatgooner heheh

“Arsenalesque collapse”? Sorry, no. That would be going pear-shaped early or mid season and then pulling it back to a semblance of order at the end.

Now, there is a club legendarily known to “always let you down”. i.e. guaranteed to suddenly be completely shit come squeaky bum time, regardless of any earlier form. Now who would that be?

Off topic, I know he’s a City cunt now but I just happened upon a great article about former Gunner David Platt (who I was delighted to meet when I was about 12) from the Guardian. I’d like to share an excerpt that made me laugh out loud at work: “While writing this article I conducted a brief internet survey into its possible sources, the answers to which focused almost entirely on his appearance, with Platt described as “resembling an almond” and (many times) as having an upsettingly fat head (although this is inaccurate as his head just looks a… Read more »

[…] other news, well, there is none, apart from the fact that Ryo Miyaichi looks set for Japan’s Olympic football team. The Japanese FA have sent documents to Arsenal asking for him to be released this summer and […]

Ryo will make the team next season…..no doubts!

This website uses cookies to improve your experience while you navigate through the website. Out of these, the cookies that are categorized as necessary are stored on your browser as they are essential for the working of basic functionalities of the website. We also use third-party cookies that help us analyze and understand how you use this website. These cookies will be stored in your browser only with your consent. You also have the option to opt-out of these cookies. But opting out of some of these cookies may affect your browsing experience.
Necessary Always Enabled
Necessary cookies are absolutely essential for the website to function properly. These cookies ensure basic functionalities and security features of the website, anonymously.
Functional
Functional cookies help to perform certain functionalities like sharing the content of the website on social media platforms, collect feedbacks, and other third-party features.
Performance
Performance cookies are used to understand and analyze the key performance indexes of the website which helps in delivering a better user experience for the visitors.
Analytics
Analytical cookies are used to understand how visitors interact with the website. These cookies help provide information on metrics the number of visitors, bounce rate, traffic source, etc.
Advertisement
Advertisement cookies are used to provide visitors with relevant ads and marketing campaigns. These cookies track visitors across websites and collect information to provide customized ads.
Others
Other uncategorized cookies are those that are being analyzed and have not been classified into a category as yet.
SAVE & ACCEPT
wpDiscuz
57
0
Would love your thoughts, please comment.x
()
x
| Reply