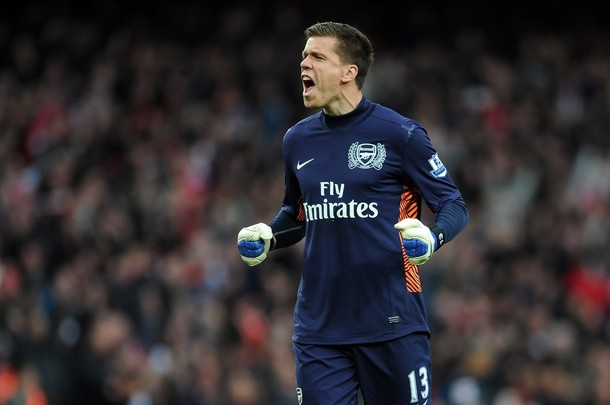 After Arsene Wenger revealed that Wojciech Szczesny had been playing with a shoulder injury for the final months of the season, and had required pain-killing injections to help him through games, there were suggestions that the Pole could be a doubt for his homeland’s Euro 2012 campaign.

Looking to nip those suggestions in the bud, the shot-stopper has confirmed that, after a week’s rest, he’s in fine fettle and is aiming to play in Poland’s next warm-up game against Slovakia.

“Everything is fine with my shoulder, on Tuesday I report for training,” he told local press.

“I’m healthy and there’s no need to do any injections. Wenger’s words were true, for about five weeks I’ve played injured, but it hasn’t got worse during this time.

“For a week I’ve been resting and the pain has completely passed. I think it was a bigger scandal in the media than a real issue. Now I’d really like to play a match against Slovakia.”

The young keeper, who has apparently inherited his father’s willingness to shoot from the hip in interviews, also spoke to this month’s Polish version of Playboy giving an insight into some of the dressing-room badinage doing the rounds at the Emirates.

Asked for his views on Chelsea’s moronic shinpad-wearing, celebration hogging, cunny of a captain, Szczesny revealed that the Arsenal team regularly use ‘John Terry’ as a synonym for an ugly girl.

“At Arsenal it [the name John Terry] is another word for an ugly girl.

“If there’s a girl around that we don’t really like, we use it as a smokescreen/codename: ‘Have you seen John Terry recently?’

“He’s terrible. I recommend this, it really works!”

While suggesting any girl looks like John Terry is a little crude, unless of course you’re talking about this lass, we suggest any offended persons give young Wojciech the benefit of the doubt on this occasion. You can only imagine the questions he was having to field from Playboy…

With thanks to our friends at http://gunners.com.pl/

Hahaha, I might start calling ugly girls John Terry’s too

OF COURSE we will… Hahaha

I love this guy! he speaks like a fan!

Hah! He speaks whats on his mind doesn’t he? Not diplomatic. I love it.

Ha Ha John Terry a bit over the top no girl deserves that comparison.
Just when you think you cant possibly like Sczesny more you already do , he says something like this. Brilliant.

Fuck, that picture is confusing me more than maths… Is that a photoshoparized picture, or is it real? I just can’t tell…

I’m a graduate Graphic Designer and to be honest it could be either. The lighting seems right, but the perspective makes it too hard to guess. It’s especially hard on photo’s that are this small and on the internet as well. Usually you could look at his hair or jersey to find some mistakes with the pen tool (photoshops version of a cutting knife) to tell.

Sorry I had to nerd out a bit there. But in the future, be on the look out for dodgy cutouts and then you to, can be a nerd in front of your friends.

That said it is a picture of the Schez now.

It has to be Photoshopped. Either that, or “this lass” won’t be contributing to the gene pool.

Surely it refers to girls that easily fall on their knees in front of RVP ?

That this is a thing that the Arsenal players do makes me feel warm inside.

Did he really say that? Is it not just an Arseblog joke? That is to good to believe! What a Legend

One more reason why Szcz isn’t a diplomat. Interview on a polish show:

He’s a veritable Polish Oscar Wilde. If he spent less time passing comments on others and more time concentrating on what he should be doing – keeping the ball out of our net, an endeavour he failed to attain 49 times in the season just past – we’d all be better off. He has the potential to be a very good keeper but like so many of our current squad he sees himself less as a footballer and more as a general commentator on all things. That’s fine – if you have the medals to back it up – but… Read more »

Go away Bale and face the Europa Cup

Szczesny better be fine for the Polish campaign. Though Fabianski looked great in the first half of Poland’s friendly against Latvia today, far too good to be a bench keeper. He did something that he hasn’t done at Arsenal before: snatch crosses like they were nothing.

For the love of dog, I hope that picture is photoshopped. No one should have to go through life looking like John Terry (except John Terry). Stan Laurel certainly didn’t deserve it.

The more he speaks the more I love this guy.

I in addition to my guys came digesting the excellent tips and hints on your site while unexpectedly got an awful feeling I had not thanked the blog owner for those secrets. These guys happened to be as a consequence joyful to read through them and have now really been tapping into these things. We appreciate you indeed being so accommodating and for finding certain smart subject matter most people are really eager to be informed on. Our own honest regret for not expressing gratitude to sooner.