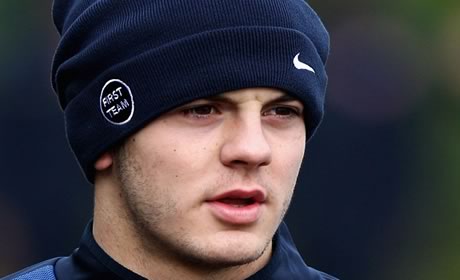 According to the doctor who performed the ‘minor’ surgery on Jack Wilshere’s knee, the operation was a complete success.

Håkan Alfredsson is a specialist at the Sports Medicine Clinic in Umeå, and although he’s been instructed by Arsenal to give away as little information as possible about the details of the procedure, he told fotbollskanalen.se (Swedish) that there were no complications.

“Everything has gone well, entirely according to plan,” he said. “We performed a surgery on a tendon in his knee.”

When asked about the typical recovery time from such surgery, he said, “The normal recovery time is usually two to three months”, which should give Wilshere a chance of being fit for the start of next season. That said, with up to three months rehab ahead of him, Arsenal’s definition of ‘minor’ seems a little off. Perhaps a better word might have been ‘routine’. Unless they were comparing it to a knee amputation in which case they’re spot on.

Jack missed the whole of last season with ankle problems, which has also ruled him out of the European Championships and the Olympics, but fingers crossed this operation is the last one he’ll need for some time, and we can see him back in red and white as soon as possible.

2 to 3 months?! I thought the minor surgery meant like a few weeks. How is Stuart Pearce going to pick him now……

the only sam is nelson
Reply to  Cygan's Right Foot

hardly a surprise, though. far better than reading that the surgeon was discovered slumped in a bar, drunk, crying about the career of a promising young footballer he’d just ruined because he’d operated on the wrong knee. using his left hand. after a bottle of whisky. *that* would be bad

Cygan's Right Foot
Reply to  the only sam is nelson

Well he isnt calle “Psycho” for nothing.

If true, it would be the first thing that has in Wilshere’s long recovery.

With that logic, major one recovery time : 3 years ? lol

We are talking about the KING of spin Arsene. In order not to sign anyone it is a “MINOR”. Just like he will be back in Jan this year. Now Jack and Diaby our summer signing!!!!.

Podolski (replacement for RVP) plus one French African from leaga 2/3 our next summer signing and the blind sheep will follow the fraud king of spin for the 8th year AGAIN.

Why are you nervous when you have me! I can cover all the spots with my skills.

Hey everybody! A Swedish doctor talked about surgery he performed on one of our players!!!

Am Glad the surgery was successful. Hoping 2 see him Play @ the start of the season.

Keep dreaming, Christmas at best. Fraud Arsene killing the kids not to spend money and sign mature players that can take the EPL toughness. He never ask the owner for money and making him money to keep his 7 million a year job.

He knows the blind sheep will follow no matter what. Who said he cares about Arsenal?????

Been a while Miranda.

Hey everybody! Somebody wished one of our injured players a quick recovery!!!

I’m glad the surgery was success.. Hope Lil Jack’s recovery goes as planned.. I’m not expecting him to be a regular next season(at least the first half) and allow him to take his time recovering properly and not hurrying..

Unbelievable! I Hope he’ll make it for the pre-season.

He won’t make it until Christmas at best. Instead of signing Arteta like the year before, our fraud manager destroy the kids promising career.

I know from a source within the club that Wilshere begged not to play anymore games, but evil, greedy Wenger forced him to. It’s all part of Arsenal’s most successful manager’s plan to make sure that Arsenal never ever again wins a trophy. Oh and my reliable source also told me that we have a lot of money, but Wenger saves it to build a gigantic statue of himself outside the stadium. Made out of poor gold. True story

Hey everybody! Somebody wished one of our injured players a quick recovery again!!!

how do these footballers who are out of action for such a long time not put on substantial weight.. has anyone got the answer ?

the only sam is nelson
Reply to  jacob

Some nice morning sex should do the trick.
Trust me I know this things.

Fucking mexican, thinks everything can be solved by cocaine.

He’s a fool. Everything can be solved by Michael Caine.

Not a lot of people know that.

We can rebuild them. We have the technology.

im gonna do a ph.d on abou “biomechanical” diaby.

Oooh, can we make him 10 feet tall with oversized fists made of steel? And then release him on Stoke? I can almost imagine GigantiJack swatting away retarded cunts, shouting ‘THIS IS FOR RAMSEEEEEY!’. 😀

To the best of my knowledge most humans are in fact man made. Or perhaps woman made.

heh beat me to the punch! 🙂

You ignorant fellow! I was man-(and woman) made and there’s nothing wrong with me. Just ask my psychiatrist, Percy Frankenstein, MD.

Any more surgeries and his leg is gonna look like sarah jessica parkers face!.

Anyone seen the bitch?, trust me she ugly.

He said: “At Arsenal it [the name John Terry] is
another word for an ugly girl.
“If there’s a girl around that we don’t really like,
we use it as a smokescreen/codename: ‘Have
you seen John Terry recently?’
“He’s terrible. I recommend this, it really works”…………….

Leave Carles Puyol out of this.

his leg is going to look like a horse?

If she’s lucky Sarah Jessica Parker will be able to get surgery to make her face look more like Jack’s leg.

Has there ever been a surgery done that wasn’t reported as a “complete success”? Just once, I’d like to hear a surgeon say “Eh, really didn’t go that great.”

You should ask Mr McGreg. He’s got a leg for an arm an arm for a leg.

You’d “like to hear a surgeon say “Eh, really didn’t go that great.””.

Well how about right after your triple bypass, or your breast augmentation?

I wish him fast recovery. Three month is nothing when u think he stayed off field for a year now

Jack at the local pub:

He should try the Guinness. It looks good, it tastes good, and by golly it does you good.

I have already accepted that he will never play football again, so whenever he returns it will be a nice surprise.

But, you know what he will be like if he comes back…

Why would you assume that a poster on here would mean Hargreaves?

We may be forced to make a new breed of super footballer from what´s left of Jack and Frimpong. I´m sure Ivan has been working on this for months, it´s the footballing equivalent of recycling (DIaby was the guinea pig but there´s nothing left on him worth saving).

The burning questions are how many squad places would this franken-footballer take up? And has anyone seen Vela and Bendtner since they returned from their loan spells and were shown the new lab for the first time?

Bela Ventner will be LANS next season.

Call me a cynic, but Arsenal asking the Doctor no to mention anything about the surgery sounds really fishy. Shouldn’t they want to encourage fans by saying telling what was done & the particulars so it sounds optimistic? Much like the RVP scenario, when you give the fans little communication as seems to be the way with everything coming out of Arsenal it leaves a very uneasy feeling in our stomachs.

The communication between the club and fans has got to improve almost as much as our injury record.

The invincible arse
Reply to  Nick

May be they don’t want the opponents to target the operated parts, like what happened to Diaby (by that worthless CL winner Essien) and Sagna (by that whoever who plays for Norwich).

You don’t need the details. I have heard about the operation. Doctor Alfredsson told me,

“First we removed a small piece of tendon from Jack’s penis, Here is a photograph of…..”

Why ruin your summer by inventing problems at the start of it? All that does is bring out the idiots with smart-arse replies. 😉

He’s actually on vacation. Wenger paid the doc to make up this procedure to ensure he would be safe from international duty for the summer.

quick recovery mate.2013 is our year guys.apart from podolski who else would you want in your team.ryo,wilshere make me be excited for next season.

Cygans LF
Spot on buddy. We still have quite a few with their blinkers on lol.
Arsene is god. (is he fuck. Sack the cunt. )

Wish him a quick recovery. Wouldn’t want to jinx it by speculating on his return.

Good thing is that now Pearce can suck it.

i love how we pretend jaks having surgery just to stop him being selected for the pointless olympic team! class! keep our player and he keeps respect of the nation… amazing. jack wilshere pfa player of the year 12/13 season.

A cross between what’s left of jack and frimpong? How about jimpong?

[…] other news Jack Wilshere’s surgery went ‘according to plan‘, says the doctor who carried it out. The recovery time of 2-3 months suggests it […]

Or how about good ol Robin van coqsong?

Haha. I bet you were tempted to say Robin van Coqsacker first. Glad you changed your mind, it was a terrible idea.

Yep, but I’m sure the people in the lab must have mulled over the idea. After all, they gave us a tall guy called crouch.

[…] you consider the fact he had surgery in late May, with the surgeon himself saying the ‘typical’ recovery period was 2-3 months bringing […]