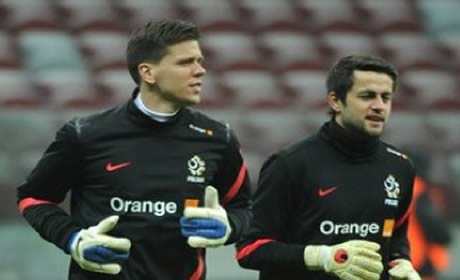 Lukasz Fabianski has turned his hand to vague comedy stylings as he sits out Euro 2012 due to a shoulder injury.

Ahead of tonight’s game between Poland and the Czech Republic there are serious doubts over his Arsenal colleague Tomas Rosicky who revealed yesterday that he cannot stand properly (who’s properly? boom boom!). But Fabianski says he’s been in touch with Rosicky who says he’s itching to play later on and that injury talk could be something of a smokescreen from the Czech camp.

Speaking to Onet.pl, the crocked stopper said, “I talked to Rosicky and he told me that he really wants to play against Poland. He is player who is always in bad condition before matches, but when the game comes, he plays in it.”

Now, Arseblog News is not privvy to everything that goes on at the club, but surely Lukasz can’t fail to have noticed all those times Tomas was in bad condition and then didn’t play? Still, all will be revealed regarding Rosicky later this evening.

When asked about the Polish goalkeeping choice this evening, with the host nation set to choose between Szczesny and his replacement Tyton, Fabianski said he’d choose himself. The cad.

He also reiterated his desire to find a new club this summer, accepting of the fact that Wojciech Szczesny is firmly established as the Arsenal number 1, but not accepting life as a number 2 keeper.

“I want to change team and to play regularly. This is just not available to me at Arsenal.”

And best of luck to him, we say. The life of Stuart Taylor is not for everyone.

Squid,park,chamackh,bendtner,fab,=> winner team.
They dont need a transfer,should just invent their own team.

I think they made a movie about that team. It was called “the Losers”. Oh, wait, that movie kicked ass. This team would be the BIzarro world opposite of that….

did it? I mean that scene with the aeroplane, biker, cash and sniper was INSANE but the rest of the movie wasn’t exactly THAT great :S

I suppose you are right….it started out strong, but overall didn’t amount to much. Kinda like Bendtner….badum tssssss….

Just leave Flappy and close the door behind you

shitsny will cost us alot of trophies, like he did for poland and in the carling cup final, sure fabianski has to leave, i’d leave too if i was second to shitsny

You eat pieces of shit for breakfast?

Go back to Redcafe, dresbeats.

Shame he was unable to keep his place, was starting to look good especially away to Man City 3-0 win. I think Wenger was spot on that he lacked something mentally. Best of luck in the future!

If we sell
Fabianski, Squillaci, Vela, Chamakh, Bendtner & Park, we should around £25million + save around £10million in wages.
Surely enough for any big signings..

I AM THE GREATEST STRIKER THAT EVER LIVED

Liked the display of your green skivvies!

Altogether now: Oooooooooooooh no you’re not!

Fabianski surprised me with his awesome run last to last season, especially the flash save from Tevez, Man City away.
But I still never saw him as Arsenal no.1. He never inspired the kind of confidence in me that I now get from Szcezsny. Sure, he has got away with some mistakes that people would crucify Almunia/Fabianski for, but he more than makes up for it.
However, like Almunia, Fab is a top bloke, wish him all the best wherever he goes next.

Yes flappy we know you want to leave, unfortunately you are rather shit so finding clubs is difficult.

shitsny will cost us alot of trophies, like he did for poland and in the carling cup final

Based on your comment, Cech will cost Chelsea trophies at the mistake he did against Greece and the rubbish 1st 6 months of this season? Oh wait, he just won the Champions League. Stop generalising a few mistakes to make a full assessment of a player. Everybody makes mistakes, he will learn from it. He has just 18 months of 1st team action, probably the least experience keeper at the Euros.

Wenger recently said Fabianski was actually the most talented goalkeeper at Arsenal a lack of mental strength was keeping him from fulfilling his potential. He said every single mistake stayed in his mind.

Bendtner is total opposite……never made a mistake and he certainally didn’t play in the Barcelona match!

That’s the problem for Fabianski. Mental strength. The best keepers in the world have superb mental strength. What sets apart a Brilliant keeper to the World class keepers are their mental strength. Every mistakes a keeper makes will cost teams points. The burden on their shoulder is high.

It’s unfortunate for him when the going was good, he got injured and that was the turning point for his career at Arsenal and the beginning of new one for Szcezsny.

Someone had to be no. One at a club, good luck to him wherever he may go, except Spurds or man. Shity!

[…] there’s little to tell you. Lukasz Fabianski has reiterated his desire to leave the club, saying: I want to change team and to play regularly. This is just not available to me at […]

[…] However, Szczesny is no stranger in that act of “displacement”, as he rightly displaced Lukasz Fabianski to make the No. 1 jersey his own. Fabianski has voiced his frustration at playing second fiddle to his compatriot and has stated that he wants to leave the club. […]