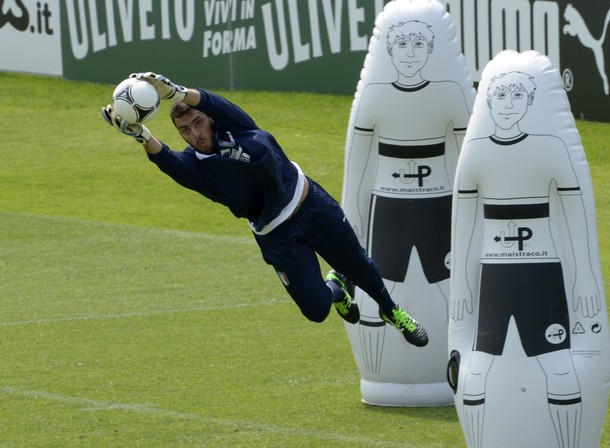 Arsenal are being linked with a move for Italian goalkeeper Emiliano Viviano (seen in action above against Jan Molby and err…Jan Molby) as speculation mounts that Arsene Wenger will try and snaffle some back-up to Wojciech Szczesny before the start of next term.

The 26-year-old, who has six caps for his country and is currently reserve keeper for the Azzurri at Euro 2012, is currently co-owned by Palermo and Inter Milan, but is almost certain to leave Sicily this summer.

Last week the stopper was tipped to join Fiorentina by Palermo president Maurizio Zamparini, but reports have surfaced in Italy that the Gunners have entered into negotiations for his signature. Torino, West Ham United and even Tottenham Hotspur have also been linked with the player in recent months.

Viviano suffered a cruciate knee ligament injury in July last year and was ruled out until January, although he has since proved his fitness at Palermo making 20 appearances last term.

Given that Lukasz Fabianski (injury permitting) and Vito Mannone are both eager to quit the Emirates for more first team football, not forgetting the exit of Manuel Almunia, it seems likely that Arsenal will be forced into the market for a keeper of some sorts. Whether Viviano is actually a target remains to be seen.

It’s more than possible that this is an internet rumour spiralling out of control or indeed the work of pesky agent looking to get his client a better deal. We’ll just have to wait and see how it pans out…

Just a moment…Let me check his stats on FIFA.

Fatcunt
Reply to  A. Wenger

Italian keepers are usually astute. His stats go like this ” I’m an international reserve keeper playing behind gianluigi buffon”.

Sounds good a second choice as any.

A. Wenger
Reply to  Fatcunt

I agree. His FIFA stats verify this.

No one bothered to check Football Manager?

He’s an okay lad. Szczesny needs to be kept on his toes and not have half an eye at goals he could on a normal day prevent. Cough* norwich-home.

(with Almunia though i’d cough all day)

Could dig up that for you…develops into a solid keeper on FM 2012.

The P on the dummies gives it away .They are the Pillsbury Dough men (Molby
is their mentor)

I’d prefer a more experienced keeper who can actually teach Szcsesny a thing or two, while being content to sit on the bench, but then such people are hard to find….

He could always talk to his dad who was an international ‘keeper with lots of experience…. wait a minute…..

I wish Jerzy Dudek was still playing. With the Polish connection he’d have been great.

So are Tony Adams and Martin Keown

It’s gone AWOL, so a deal will be hard to complete

Isn’t Craig Gordon available on a free? Back in the day, Arsene baulked at the fee for Gordon and went for Fabianski instead but Gordon must have remained on his radar. His injury record admittedly is not good but then Arsenal’s facilities are some of the best in the world for player rehabilitation so could work for both parties. Whatever happens lets just hope that Szesney get the No. 1 shirt now Almunia is out the door. With the launch of the new strip, it is a chance to sort the whole squad number fiasco out once and for all… Read more »

he’s obviously used to working with a nimble and highly mobile defence so he’ll feel at home if he does come. er…

I have heard of this bloke who was, until recently, employed. Having been sacked, he’d be available for no fee… Oh wait, ‘appy ‘arry can’t play in goal.

Joking aside, I think we should try and hold on to vito mannone and sell fabianski this summer.

It’ll have to be Sandra then.

It’s about time we were linked with someone new today. We do need a backup keeper. It’s a very tough position to buy for, not many keepers apart from Stuart Taylor want to be backup for most of their career

Great career move by Stuart Taylor, leave The Arsenal to become the No 2 keeper at Villa, made about as much sense as Cudicini leaving Chelsea to be Spuds No 2.
Craig Gordon would be a decent back up IMO, or someone like Given. Szechny needs to be getting advice from a quality experienced player. I do wonder about our Goal keeping coach, is it still Peyton? He hasnt seemed able to iron out the frailties in Almunia and Flappy’s games. Oh to have Seaman passing on his pearls of wisdom.

If our lads refuse accept szcz as our number one, let them go. Any new signing we make will do so with the expectation that they will be on the bench. Lets not get our panties in a bunch until the story is confirmed by the Arsenal.

another man who knows what futhead is. nice.

It appears GK may be the position in the most urgent need! No one to back up our Szczesny!

Martinez if needs be

I just woke up from a dream… Walcott to Chelsea?

Keep your dreams to your self what made you think your important enough for the rest of us to care.

…I care about your grammar though.

McGregor from Rangers’s free agent. Could be one to watch I wouldn’t be surprised if AW go for him

Why is that any time Arsenal are linked with any player “Tottenham are also said to be interested” appears? Spuds are like Herpes.

kiss my arsenal
Reply to  Nick

haha you beat me to it, even though i was going to say that spuds are like (insert name of any known STD here), which would also have been true

It’s because they have no scouts. Only pick interest in players rumoured to be linked with Arsenal. O wait! “Arsenal linked with prolific English Goal Machine, Emile Heskey” Now Sp*rs go for him! 😀

In the summer of 2010, there were persistent rumors about us moving for Viviano. That was the same summer we were chasing Mark Schwarzer and then made a bid for Reina… What a stupid summer that was.

No dude. That bloke was Federico Marchetti.

From what I’ve seen of him, he seems a pretty decent keeper – being backup to Buffon is no insult. I’d feel pretty confident with him between the sticks so he should keep Szczesny on his toes. Hope there’s something to this, we do need to sign a keeper I think because Martinez probably isn’t good enough to be our second stringer just yet.

I’m not sure it’s entirely correct to call him Buffon’s backup.. I think he’s actually 4th or 5th choice. Viviano didn’t make Italy’s Euro 2012 squad, with De Scantis from Napoli and Sirigu from PSG getting in ahead of him. And at the World Cup, Marchetti from Lazio played when Buffon was injured..

Is this a backup transfer story, as no real stories around?

Fair enough, I’ll take what I can get.

Football is a squad game. You can’t win without strength in depth.

erm, it was just a joke.

albeit unfunny, so fair enough!

Messi would be good too.

Nasri is a cunt

Rangers keeper is refusing to join newco, is he any good? haven’t seen him play.

Yep he will do. Why waste time watching him?

[…] with potential arrivals, Arsenal has been linked with Italian shot stopper, Emiliano Viviano. Wojciech Szczesny is the club’s chief custodian […]

Don’t we already have Damian Martinez.

I thought he was our next big thing.

[…] is gone, Fabianski and Mannone also want out. We’re linked with Italian Keeper Emiliano Viviano we also have youngster Damian Martinez though he may not be ready […]

[…] far we’ve been linked with Norwegian Kenneth Udjus of Sogndal & now Italian international Emiliano Viviano who is with Palermo.  If there is no signing in the ‘keeper spot that would leave only […]

[…] has a big future ahead of him, and next season will be a big test for him. We have also been linked to Italian custodian Viviano. There were also rumours about that Norwegian keeper. Now with Almunia released, and Fabianski […]

Are you facing financial difficulties or is your business folding up as a result of lean finance? Have you being dreaming of setting up a business of your own but ends up limited by lack of finance or start up capital or desperately in need of low interest loan(soft loan) to settle outstanding bills or debt Stanbic finance firm An accredited online loan firm is currently offering out loans with an affordable interest rate. We give out loan to individuals/firms who are in need of financial assistance. We grant loans such as Auto loan, Mortgage loan, Personal loan and Business… Read more »