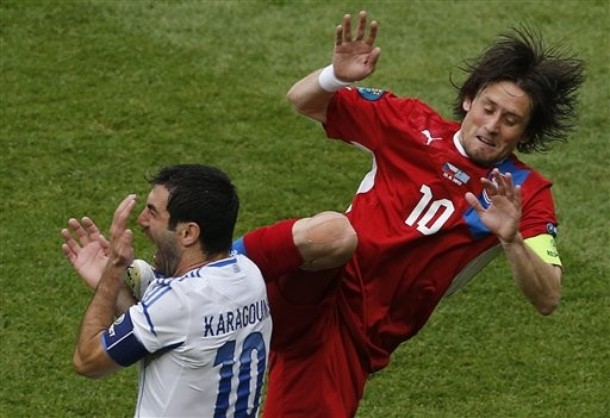 Tomas Rosicky (pictured killing a man) is struggling with an injury. If this was 2007-2010 Arseblog News would just shrug its collective shoulders and go back to refining its list of childhood regrets.

Things though have changed. For Tomas. The list is still harrowing.

Having had a decent second half to the season, the Czech midfielder had been tipped to impress at Euro 2012, but it seems an Achilles problem picked up against Greece could rule him out of his country’s vital final group game against Poland.

Claiming that the latest problem is the result of aggravating an Achilles injury sustained at Arsenal towards the end of the season, Rosicky explained:

“Unfortunately I got a knock in the same place where I had issues towards the end of the club season at Arsenal,” he told sport.cz.

“Naturally I cannot describe it in expert terms but it is the place where the Achilles tendon goes into the heel.

“I finished the season at Arsenal with this issue and, unfortunately, now I’ve gotten hit in the same spot again. Someone kicked me there.

“Given my role in the team and the movement I usually get a lot of knocks. You can’t avoid it unfortunately.

“This is a bit different (to the injury at Arsenal). When it happened at Arsenal I was basically not training at all ahead of the last three fixtures. I just played in the league matches.

“But it was not as painful as it is now. I have a lot of swelling and it hurts a lot.

“It hurts me even if I walk. Actually, I cannot stand on the foot properly.”

Not being able to stand properly doesn’t bode well if you fancy playing a game of top level international football. A shame for Tomas.

In other news, UEFA, who’ve left dealing with crowd violence and terrace racism on their to-do in 2057 list, look set to punish Nicklas Bendtner for his boxer short stunt.

Despite Bendtner claiming that his Paddy Power undies are just a regulation pair of ‘lucky’ briefs, European football’s governing body made clear they’re having none of it.

In a statement they confirmed: “Uefa has today announced that disciplinary proceedings have been opened against Denmark’s Nicklas Bendtner for improper conduct (Law 4 of the Laws of the Game) at the Uefa Euro 2012 Group B match against Portugal in Lviv on Wednesday, 13 June.

“The Uefa Control and Disciplinary Body will deal with this case on Monday.”

Hardly a surprising course of action from the Switzerland’s finest pedants. Here’s to Bendtner scoring against Portugal and pulling down his pants to reveal “Fuck You Platini,” in carefully vajazzled diamanté crystals…

Arsenal players and their achilles-injuries… now there is a reoccurring fun activity!

It could very well be a drinking game.

Do these chumps not earn enough money without needing to have sponsored skid marks?

Thats rules him out for next season then.

Were his eyes closed?
No but seriously get well soon man.

Me; “I can’t stand John Terry”

Seriously though, get well soon Tomas, we’re all rooting for you.

Always our players with injuries… get well soon Tomas.

If Bendtner scores against Holland he’ll be worth keeping for his time-travel abilities as well as his goal scoring prowess.

I don’t know about you, but Nicklas Bendtner is becoming my fave Family Guy character!

What will that crazy guy do next? Break another Aston Martin, advertise Haribo Tangtastics on his cock?

I know times are tough in Greece but seeing their international player try to eat the shoes of their opponents is distressing. Maybe a whip-round for a little bailout would help

the Paddy Power ad on the right hand side is a nice touch, though I’m sure it would have been there anyway.

Look at it this way, our players get injuries because they are PLAYING!
As opposed to getting injuries from the slightest knock etc.

Have you seen Nicklas lately?

I just turned around the other day and he was gone.

Are Paddy Power offering bets of what Bendtners next set of boxers will say!?

I wish it was John Terry at the receiving end of Tomas’ killer boot. Abou didn’t finish the job in 2007

That is a fucking brilliant picture.

How dare gerrard deny the ox his first international goal!.
I’m so pissed right now.
Walcotts six year journey was epitomized yesterday, he even shocked himself with that goal.
Good for him, now I expect james shitty milner to interact with the bench a lil more often.
Up the gunners!!!!!.

I cannot believe Gerrard took away Ox chance. Seriously, that was greedy from the England captain. He was in no shape to take the shot, it was on his left foot body shape was all wrong. He really should have left the shot for Ox. Booo!!!!

[…] Achilles injury which he picked up at the end of the domestic season. He seems unlikely to play, saying: Unfortunately I got a knock in the same place where I had issues towards the end of the club […]

[…] Achilles tendon injury suffered in the tail end of the concluded season and he has stated that he can’t stand properly: “Unfortunately I got a knock in the same place where I had issues towards the end of the […]

EURO Roundup from the eyes of a Gooner – 2 « Blazing Cannons

[…] over the other. Tomas Rosicky looked lively I though, but had to be bought off, after some Greek cunt sparked something wrong in his Achilles. He could be out for the rest of the Euro’s, and we can only hope he will be fit for the […]