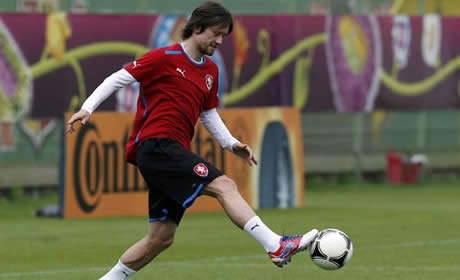 While most Arsenal fans would want a team with Ronaldo, Nani and Pepe to get beaten out of all existence anyway, having Rosicky in the team would have made it all the more interesting.

However, it looks as if the Achilles problem he’s been struggling with will keep him out of the starting line-up with his participation as a sub more likely but still doubtful.

“Will he be able to play from the start? I don’t think so,” said Czech manager and former Liverpool player Vladimir Smicer. “He hasn’t trained for eight days, only doing some work on a bike.

“In order for him to play in such a tough match, he should at the very least have had three full training sessions in order to be 100% ready.”

Rosicky himself revealed the seriousness of his injury when he admitted he couldn’t even stand properly, and while it’d be nice to see him take part, you do have to worry about whether or not his participation would impact on the start of next season from an Arsenal point of view.

Achilles injuries are notoriously slow to heal and playing through pain may aggravate it to the point where it needs long rest to recover. Although if he smashed a ball straight into Ronaldo’s face, bursting his nose all over the place, then spent 3 months out I think I’d take that.

I’m really hoping this Achilles problem doesn’t turn out to be a huge ordeal like Vermaelen’s two years ago. Get well soon, TR7!

Is Tomas a mechanic in his spare time?

He plays the guitar I think.

He denied being into metal in an interview I saw once.

to be fair i’d rather he smashes the ball into nani’s face on the basis that nani’s absence from the glazerhawks team will be of greater benefit to the arsenal than pouting boy being out of the special one’s ego-laden side.

I HATE Nani, Ronaldo and especially Pepe. That cunt. Disgrace to football, him and his tackles. Rosicky really shouldnt make an injured sub appearance against a side that has Pepe.

Most likely because Arsenal fans have the balls to acknowledge a cunt when they see one.

Sam
Reply to  gooner from bangladesh

Why would Arsenal fans hate on Pepe?

CAGooner
Reply to  gooner from bangladesh

My wife, who’s an occasional fan, was watching one of Portugal’s games with me and commented, “Ronaldo’s kind of a diva, isn’t he?”

Ideally, I would like Pepe to collide with the fake Ronaldo during a corner\free-kick and both get injured for the coming season with Nani getting smashed in that fugly face by one of the Czechs..

Koscielny’s Turn to Shine and some Transfer Speculation « Gooner Daily

[…] Republic are sweating over the fitness of their captain, Tomas Rosicky, but they’ve been offered some hope as he trained […]

[…] against Portugal. For this one I’d certainly have a preference for the Czechs, even if Tomas Rosicky is very unlikely to play due to his Achilles injury. Portugal have too many players with too much history. Nani and Ronaldo, […]

[…] open on his flank. They have to tighten up defensively. Czech Republic, according to some reports, will be without captain Tomas Rosicky. It will be a big blow for them, especially considering the end of season form that Rosicky was in. […]

[…] open on his flank. They have to tighten up defensively. Czech Republic, according to some reports, will be without captain Tomas Rosicky. It will be a big blow for them, especially considering the end of season form that Rosicky was in. […]