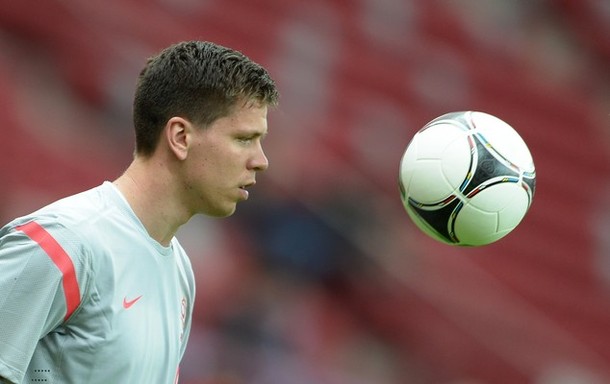 As one of the most high-profile Polish players at the European Championships, it’s perhaps unsurprising that Wojciech Szczesny is a very visible presence in the media as the tournament gears up for kick-off this evening.

Over the course of the last few weeks Arseblog News has featured a number of interesting snippets taken from interviews conducted with our 22-year-old goalkeeper. On a quiet news day, we make no apologies for featuring Szczesny again, as he talks about Euro 2012, Arsenal, accusations of arrogance, crazy goal celebrations and life in London.

The following Q&A session originally appeared in Polish publication Przegląd Sportowy and has been lovingly translated for us by the team at Gunners.com.pl.

What are your plans for 1st July?

To drink champagne in Kiev, what else? (grins) Winning the European Championship is my dream.

For the last six major tournaments in which Poland participated, world and European, we didn’t win the opening game. What makes us different now against Greece?

I will put it objectively, as a football fan. During the previous big tournaments, those in the 21st century, we were lacking players, who performed outstandingly in the top European clubs. Today no one can say that about, for example, Borussia Dortmund, where our Polish trio plays a very important role. With such individuals we stand a chance of getting somewhere better than our predecessors. And I’m not talking only about the Borussia lads; I’m also delighted to see Rafał Wolski’s skills. Because I don’t watch the Polish league very often, I wasn’t aware we had such talents back home.

How do you concentrate before such important games? Toni Schumacher, a former German national team player, said that in such situations he would stand right in the middle of the pitch and repetitively say to himself that he was the best keeper in the universe, a wildcat that preys on the ball.

I am not a cat, and I don’t mix my job with any philosophy. I just have to catch every ball flying towards me; and I only concentrate on that. Come to think of it, my job is not really complicated – I just have to throw myself at people’s feet or catch the ball.

Do you enjoy being in the spotlight?

Occasionally. Of course, I don’t want to be in the tabloids. If I have to, I’d rather be on the last page where the sport section is, not the front page. I don’t want to be famous for any reason but football. I don’t intend to become a celebrity. When it comes to bad antics, it’s really simple – if you’re not looking for trouble, you won’t get any. I go to a nightclub only when I am allowed to and we have a couple of days off. So far I’ve had no troubles with paparazzi and I would like it to stay this way. I only agree to photo sessions; in fact, I do them for my own keepsake rather than the magazines. They will be nice to look at in twenty years from now.

A reporter from The Sun (Charlie Wyett speaking to We Are The North Bank), who coached the Arsenal youth on media relations a few years ago, best remembered you: “Most of the others were just staring out of the window bored shitless. I asked afterwards who this kid was and was told he was a very talented Polish goalkeeper.” Obviously, he was talking about you…

I was always curious about the world. I was never afraid to ask, and I still don’t consider it a flaw. I don’t like clichés and banality in general, and I wouldn’t express myself this way. Obviously I am aware how I might be perceived. I have to stop myself from going over the top. I admit, though, that sometimes I can do or say something controllably reckless.

How do you mean? Are you saying that after a game you already know you have to say something controversial to the press? Or maybe it’s about the goal celebration during the game against Germany last year? After Kuba Błaszczykowski scored 2:1 you ran behind the goal, grabbed one of the photo cameras and started shooting pictures of yourself. Do you plan this type of actions ahead?

Absolutely not. In Gdańsk it all happened spontaneously; I was just enjoying the goal, I spotted that camera and rushed to capture myself in that very moment. You’ve made me realize I never actually saw those pictures. Maybe that cameraman will call after he reads this interview? Unless he was German.

If you’re so curious about the world, might you one day become a journalist?

Oh no, with all due respect, I’d rather become a priest.

Why are you often called arrogant?

It only takes one self-confident quote of mine and I’m already labelled arrogant. When I was the third keeper in Arsenal I said that I deserve a chance. I wanted to be the number one, I truly believed that. They all shook their heads at that barely nineteen big-headed punk. And then what happened? I got my chance and I never let it go. For me that’s self-confidence, not arrogance. I proved I was right. I’m being taken the wrong way very often.

Because somebody gave me the label of a spoiled bastard, who thinks he’s the best in the whole world. But let’s just say that I can really do a bit more than that, and I have a bit of a better life than most of those who say so. It is so typically Polish to envy and be jealous, and I can’t change that. My teammate Emmanuel Frimpong said something nice once on Twitter: “Haters don’t hate you. They hate the fact you’re the one that they wanted to be.” That shows being envied, not disliked.

Is your love of London a love for life?

There is no better place to live than London. I have wound up in a city, where life is wonderful. I am 22, I have seen many interesting places, but nothing compares to London. You can go somewhere for a week time and have fun, like Las Vegas. I haven’t been there actually, I am planning that for next year; I mean, in such places you can party for a couple of days and get bored. That’s not a place to live. London is different – it welcomes everybody, the quiet ones, and the ones seeking excitement. There is something for everyone. I can’t imagine living elsewhere.

Let’s go back in time a bit. It is June 2010, and you’re coming back to Arsenal from your loan to Brentford. The club was considering you as the third goalkeeper. You couldn’t have thought that in two years, for the European championship, your place in the Polish goal would be undisputable, could you?

A lot of things have changed in my life in a very short period of time. I am hugely indebted to Arsenal for giving me a chance to make a great career. I cannot imagine playing in another club. The Arsenal club, especially the goalkeepers’ coach Tony Roberts, have shaped me as a footballer. When I finish my career in a couple of years or more, Tony will be among those whom I am thankful the most.

Hello to all of you in the media who are about to steal these quotes verbatim. If you do, and don’t say where you got them from, we’ll first call you a naughty word on Twitter (probably ‘cunt’) and then chase you down with a pitchfork before gouging your eyeballs out with our dirty fingers.

He’s a good kid, our Wojciech

I can really see Szcz becoming a world class goalkeeper within the next few seasons, self-confident, grounded and ambitious

You just gotta love the lad! Long may he reign as the Gunners’ No.1!

Okay okay……….i love and adore you szczesny anymore and i’l want to have sex with you.

That postscript is gold.

I drew Poland in my work European Cup sweepstakes, and I was depressed until I realised that meant I had more of an excuse to watch him play.

Good luck at the championships Woj!

He’ll be around for a lot more than a couple of years. He could be our number 1 goalkeeper for the next 15 years.

I love his attitude. He is a class goalkeeper. If he keeps improving he’ll be the worlds best.

What a guy, wonderful attitude, great goalkeeper, he loves the club and he also loves the city. What more can you ask for?

“Haters don’t hate you. They hate the fact you’re the one that they wanted to be.”

“Come to think of it, my job is not really complicated – I just have to throw myself at people’s feet or catch the ball.”

Love Szczesny, every interview he gives makes me love him more.

Future captain of Arsenal! … calm down please, in couple of years I mean, after Rvp goes to China.

I’m trying to think of footballers less likely to go to China than RvP.

I got zilch. Anyone else?

No i see MLS in his old man days!

What a great young role-model for aspiring kids out there. Impressive, level-headed, but confident, with a hard-working attitude. At 22. Players like him make me truly proud to be a Gooner.

he knows hes good, what makes him great is that he knows he can be better

“When I finish my career in a couple of years or more, Tony will be among those whom I am thankful the most.”
Erm a couple of years? That got me worried and then I figured it was probably a phrase in Polish that gets lost in translation.

Full points for an inane observation.

He wasn’t speaking English when he said that. As somebody already said, it was probably a Polish phrase that doesn’t have a direct equivalent in English. Either that or he was just making a joke. He does that sometimes.

Sorry for the meeting the red master Mr. Zcscesny

Maybe he should be a Priest …

He knew he was a goner when he brought the Greek down, and I was impressed to see that he walked without complaint, and kept his dignity intact. In my own view I don’t think it was a terrible offence. Looked like an instinctive stretch for the ball, not a deliberate attempt to impede the player. On another day or with another ref he might have got away with a yellow as the ball was heading out wide and wasn’t a cast iron guaranteed goal. If he had survived to face the penalty you’d think he would have had a… Read more »

me thinks he had an almunialistic game against the greek.

no he didn’t , He had his natural , that tackles was typical chesney , Almunia or any other keeper in the world would havee just stayed in his line and they would have scored

Szcz is a fucking beast.