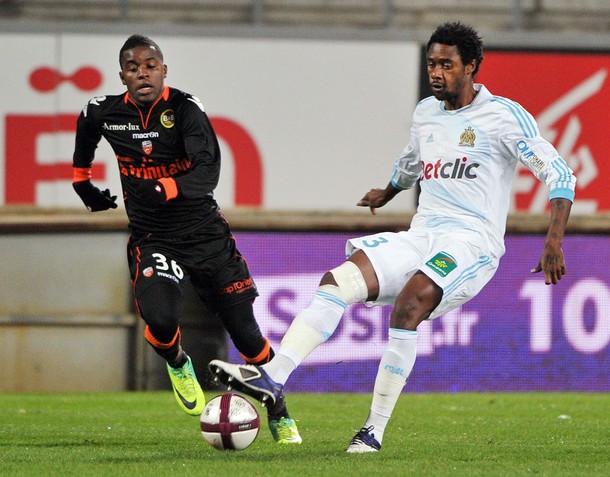 Costa Rican striker Joel Campbell will continue his football education away from the Emirates again next season with rumours emanating from his homeland that the striker has sealed a year-long loan deal with La Liga side Real Betis.

The 20-year-old was signed by Arsene Wenger from Saprissa in August 2011 but failed to seal a British work permit and was immediately loaned to Ligue 1 side Lorient for whom he subsequently scored five goals in 25 appearances.

Having snapped up both Lukas Podolski and Olivier Giroud, and having failed (so far) to offload any of Nicklas Bendtner, Carlos Vela, Ju Young Park or Marouane Chamakh, it comes as little surprise that Campbell’s raw talent has been deemed surplus to requirement in the short-term.

There has been no confirmation that his work permit application for this season has failed, although it looks as though it too could have formed part of the decision.

A Spanish speaker, Campbell should be able to lean on his experience in France over the last twelve months to stamp his mark on the land of the reigning World and European champions.

Omen that RVP is staying?

Good news if it’s true. Incredibly talented, but far from ready right now – he scored 4 goals last season. To think Giruod scored 21 in the same league and people have criticised his signing…

he’ll score as many as Fabregas next season.

Huh? Betis are Spanish and Giroud played in the French League.

Oh I forgot to say one other thing. DERRRRRPPPPPPPP!!!!!!!!
http://www.youtube.com/watch?v=PkVhMUH0nEc

It sounds like a good move for him. Betis are a decent attacking team and he speaks Spanish. I hope he gets a lot of playing time and does well. Best of luck Joel.

It’s good to see the club doing so much business early in the transfer window in comparison to last summer.

This guy will never play for arsenal. Unless you are put into the team straight away when signed you end up never getting a chance. Name a player that has

SPUD DETECTED!! Just because your club has a shit youth academy and does fuck all for its youngsters doesn’t mean our club will do the same.

To answer your question, I don’t think Gibbs, Walcott, Szczesny, Ryo were all ”put into the team straight away”. Point being: Stfu and trust Wenger.

gooner from bangladesh
Reply to  welly

Im baffled by your intelligence. The guys is 18/19, I think? Nobody of that age breaks into the first team of clubs like Arsenal,etc.

ETID
Reply to  gooner from bangladesh

Wilshire & ramsey did too

His target in the La Liga should be to score at least 8 goals in the season. His main competitor at Betis should be Vidal, who’s 30 years old, so I expect him to at least push for 22+ appearances during the season. I still rate Afobe higher than this kid tho, hope to hear news about him soon.

I think Afobe will be more of a target man than Campbell, who is pacier and long-term would probably play on the wing in our 4-3-3 formation.

Afobe looking certain to go to hirmingham again under lee clark who had him at huddersfield.

Davi, it’s not letting me reply to you, but I think we’re gonna start moving away from the 4-3-3 a bit. After signing a bunch of strikers I would guess we may head back to the 4-4-2 while still having the option to go 4-3-3. No inside information, just speculation as to why Giroud would sign with us if he’s expecting Van Persie to stay.

Wilshire spent a year at Bolton before he was ready to secure his place in the first team. Chez was at Brentford for the same amount of time.

Although not signed, wilshere, gibbs, szcezeny all went out on loan too.

GOod news. I thought people were being very optimistic when they said he could be our third choice striker (after RvP and Giroud). I doubt he would get much playing time with us, and since Betis seem keen on getting him, he should get some playing time there as well.

Allow me to rephrase.

If the thumbdowns surpass the thumb ups then he’s definetly gunner leave.

Thumbs up if you think @Ref is talking a load of shite.

why? are you his agent? If you are, thumbs down for being an agent. Boo!

You asked for it.
He gone man, he gone!!

His target in the La Liga should be to score at least 8 goals in the season. His main competitor at Betis should be Vidal, who’s 30 years old, so I expect him to at least push for 22+ appearances during the season. I still rate Afobe higher than this kid tho, hope to hear news about him soon.

Wow look at us all being parents here already setting the grade that our kid campbell should achieve. Given i am just 23.

Don’t worry, we’ll be setting your targets for the season soon, young man!

His main competitor is not Jorge Molina (Vidal as you call him), its Ruben Castro. As a Betico im expecting them to go 4-4-2 with Ruben Castro and Molina as attackers. Then I can see Campbell as a third choice and might have 15-20 appearances.

He might even be used as a more winger along with Pereira/Pozuelo/Vadillo. But im mainly expecting he will be the replacement for the returning (to City) Santa Cruz. If thats the case 25 appearances is very realistic.

This is definitely a good move for Campbell. He’ll get a great amount of experience in Spain and hopefully after another full season on loan he’ll be ready to show Wenger what he’s capable of at Arsenal. Good luck Joel!

by then RvP will be a #10 , and he’ll rotate with Giroud…that is if the world doesn’t end this year

If it does Reading will be our last match. Let’s hope for a big win!

[…] Campbell will not feature for Arsenal this season. He will spend the season on loan with Real Betis. We’ll have more reaction on this move later […]

THEREISBEARCUM
Reply to  The BearMan

It appears you needs with English lessons.

Good luck Mr Campbell. I hope you’re infinitely more successful at Arsenal than the other J. Campbell at Arsenal (who got released this summer).

I hope he does well and toe punts the ball in Xavi’s face which then rebounds in to score the winner and knock them out of CL spot.

I can see park chamakh bendtner arshavin and vela all still here next season along with rvp giroud podolski walcott rosicky gervinho and chamberlain. those 12 competing for 4 attacking slots would that be so bad?

Why do people keep forgetting about the 25-man rule?

Maybe because players under 21 years of age don’t count towards it?

Right now we have a first team squad of 30 players with only 3 under 21, so the idea that we can still field x amount under 21 is valid.

It was a couple of seasons ago when we had exciting young players in the first team but they unfortunately aged.

Good luck to the young lad, but I do wonder why his work permit is such an headache?!

My understanding is that you have to have played 75% of your country’s matches in the last 2 years. There are obviously other ways to get it, otherwise you wouldn’t have the likes of Miyachi getting one. But that is one way anyway.

It is what it is
Reply to  Gearoid Kelly

Or, be an outstanding young talent/prospect who will definitely be a super star one day, and will earn huge wages that is taxed at 50%. Simples

Real Betis is a good side. It’s a good move for him and us.

I’m just wondering why he isn’t staying at Lorient? Of course i don’t know the plans of that club, maybe they just don’t need a loan striker for another year. But in theory i think it would suit them well, as he’d be talented, cheap and he seems to be already well integrated in their team, and Lorient seems to be a club that treats our loan players well, so it would also suit us.

Not a bad option, but who is to say that Betis won’t treat him well too. Plus, going around to different leagues can give you something that staying in one won’t.

Kinda on the fence about sending any of our youth players to spain its been a fucking disaster for most of them.
Maybe the year in france will have helped and he can kick on score a few and return to the emirates next season as a hot property.

It is what it is
Reply to  redsy

The young loanees haven’t exactly acquitted themselves well enough. Vela did, but only cos it was a last chance window.

Spanish football has a better profile and is of a higher standard. Lets hope this brings out the best in him. I personally feel his style and that of the not-to-physical, utterly technical spanish league will improve and showcase his technical abilities (a la Vela), then he can return and bulk up in readiness for Terry, Shawcross and the other hackers out there.

Also, think its Germany or Spain for TGSTEL.

[…] as a bench player & that it might even signal a possible exit for Walcott after the season but a loan looks to be on the young Costa Rican’s cards.  Not sure if this is due to the lack of a work permit or not or if Wenger has just gone ahead […]