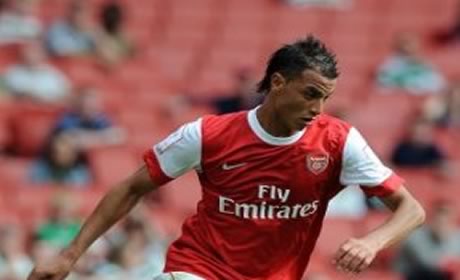 Out of favour striker Marouane Chamakh is being linked with a move to Russian side Rubin Kazan.

A Kazan source told lifesports.ru, “Chamakh is very interesting to our club. He can be a great striker to provide a focal point to our attacks.”

“Work towards new acquisitions are still ongoing,” Life Sports Rubin spokesman Maxim Lopukhov said. “The primary goal is to find a forward. But in any case, I cannot give you any specific names.”

Chamakh’s agent, Pierre Frohlich is quoted too, saying of his client’s Arsenal career, “Marouane would like to continue playing in this team but if the Gunners will want to sell the rights to the player, we can talk about specifics.”

Wages would probably prove something of a stumbling block as Chamakh, signed on a free transfer, will have a signing on fee paid over the duration of his contract as well as his standard salary.

However, with the signings of Lukas Podolski and Olivier Giroud the likelihood of Chamakh earning a first team spot are reduced, even if Robin van Persie leaves, and the goal-shy Moroccan international will really have to consider leaving to play regularly next season.

I mean, he’s a decent player when he gets an extended run in the starting team, hard working and all that, but he cannot shoot for shit. He almost seems scared to.

We need to move on several players whose salaries aren’t a proper reflection of their ability before we can actually sign many more players.

Flog him there with a good crosser of the ball (Ashravin) and he’l score lots and lots of goals (i think). Two birds, one stone,,,,,,bang!!!

BOGOF. Nice. Can we chuck in TGSTEL as well? Him or/and his boxers should sweetin’ the deal.

here’s hoping it’s not another non-story.

Wenger will never sell me, he told me I’m starting every game this year

Wingers
Reply to  gooner from bangladesh

I still feel for Chamakh after such a great first 5-6 months his first season. We just don’t play to his strength (aerial attacks).

Vick
Reply to  Some Gooner

We should add an extra ‘pair of hands’ for throw ins. Last few minutes, chamakh and the extra pair of hands come in and bam!!, goal.

He really is great striker and he really does love Arsenal, but it’s a shame the last 18 months have been so bad for him(goal-wise, I’m sure he got paid a lot). It’s for the best for both parties. I’ll miss him if he leaves, like on an emotional extent, as far as football goes, I’m not sure. Even a world class star like Podolski had a bad stint at Bayern, it happens to almost every player, so let’s not hate him and say abusive stuff but remember him for how he salvaged games in the first 6 months of… Read more »

CountLeaf
Reply to  gooner from bangladesh

walcott'spowerthrowin
Reply to  gooner from bangladesh

“He really is great striker and he really does love Arsenal” ahhh…. cloud goner land

gooner from bangladesh
Reply to  walcott'spowerthrowin

No, I’ve seen him play for Bordeux.

Well that move is out as the nightclubs in Kazan aren’t a patch on London’s (so I have heard).

Shut up and take my page visits!

I’m so bored, I don’t even care anymore if what you post is accurate…. just keep filtering the rumors to a slightly higher standard than the mainstream press and I’ll keep clicking refresh.

Get off my bench!!

Wenger say he won’t sell you because no one will buy.

I hope there’s something to this one. I suspect if he does move his performance will pick up for another team, so it’ll be a rare win-win situation.

Chamakh and his £50k wages, shisha pipe now.fingers crossed that there’s lots of night clubs there. Failure to this might prevent any sort of deal pushing through.
COYG.

Taxes are near the 20% mark in Russia. My man Mauroane would still be expensive but within the range of affordablity for a club like Rubin.

I think chamack is stil a gud player,he need to have that confidence in him.

at this rate, chamakh is closer to getting a statue than a certain someone

Robin van someone
Reply to  kiss my arsenal

Certain Someone
Reply to  kiss my arsenal

Why is it that big-lad-up-front types seem to need to play every week to look remotely in form?

I’m not saying they’re similar quality-wise, just that they seem to suffer from bench-sitting more so than the slimmer models.

On a totally different tangent & this purely ‘coz I needed to vent, but I’m gonna incredibly disappointed in RVP if he goes to United – that’s just not on. I’m seriously praying that Juve or Milan come up with the cash, atleast a bit of his legacy would be preserved.

What’s an RVP? Sounds kind of like a nasty STD. That’s what scoring when you want gets you I suppose

I need to stop playing FIFA. I am getting terrible at understanding that selling and buying of players is more than just pressing ‘X’ button.

‘More-than-one Shambles’ (sorry I mean Marouane Chamkah) needs to go – he’s blown it and shot his load (I mean he’s shot his bolt)! I’m sure someone will give him a gobble (I mean gobble him up)!!

Shame I really like the guy but I wish him all the best if goes however if it does happen lets make it happen quickly.

He’s had a pretty rubbish 18 months but if the confidence ever returns, he will score again. Not as rubbish as most make him out to be. The fans hate him and have run out of patience with him, so he has to go, but I would have no problem if he stuck around to be 3rd or 4th striker. Injuries will inevitably happen throughout the year and if he has to lead the line when others are out, I wouldn’t have a problem with that. He’s not old like Arshavin.

Any new development/transfer news on J.Y. Park? I heard South Korea beat Senegal 3-0 in the pre-Olympic warm-up game, and he scored a goal.

Park chamakh and bendtner are all goalscorers just not from the bench. given an extended run in any team they have and will score goals. no matter what players we buy or keep. it is unlikely we will see the sort of run that rvp had last season. even rvp wont do that again. for a start how many lone strikers will play in all 38 league games.