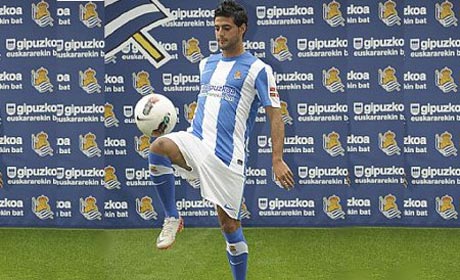 Arsenal have confirmed that Carlos Vela is to hold official talks this evening with Real Sociedad in order to finalise his move away from the Emirates.

As Arseblog News has been reporting throughout the summer, Sociedad have made Vela their priority signing of the summer after the Mexican international impressed on loan last season, scoring 12 goals in total.

In a statement on the official website, Arsenal say, “Arsenal Football Club has announced that striker Carlos Vela is in San Sebastian this evening for final discussions about a permanent move to Spanish La Liga side Real Sociedad.”

Such talks would suggest that agreement has finally been reached between the clubs. Although a fee of around €4m has been mooted for some weeks, the sticking point appears to have been Arsenal’s interest in the player should the Spanish side sell him on.

Sociedad had suggest a shared ownership arrangement, which Arsenal have rejected, and instead it’s likely that Arsenal will receive at least 50% of any future transfer fee he generates. The club were anxious to recoup as much of their investment in Vela as possible, and at 23 years of age he’s likely to earn the club some money in future seasons.

Vela joined Arsenal in 2007 and spent a season on loan at Osasuna before being granted a work permit. He became well known for his deftly chipped goals, usually in the Carling Cup, but despite chances never established himself as a first team player at the club.

A Premier League loan move to West Brom wasn’t enough to convince Arsene Wenger he had what it takes, and it now looks as if the warmer climes of Spain and the style of football there suit him best.

Is that a new type of chip he’s practicing in that picture?

He’s like the hairy version of messi so he i’m sure he’l pull it off.

This is very very odd. I have never seen Arsenal putting anything on the official website before the deal is confirmed.

Me either, although they’re more likely to about a departure than an arrival.

Eurobot from eurosport is up on you today Arseblog, Arseblog news is usually first to provide me the info. Not complaining though. Love the Arseblog News.

haha, we were eating a sandwich.

Could be that they want to assure people that wages are being cleared and our negotiation team are not, in fact, the Marx Brothers but actually doing something useful. Possibly ahead of any big moves out of the club but nobody’s unsettled here atm, right?

I reckon they’re keen to show the world that even though we’re getting rid of a bunch of players we aren’t giving them away. This tells people that when we sell we are playing hardball.

A good deal for all concerned. Another good bit of transfer business. Especially that 50% sell-on clause.

Despite all those chips, he never really looked worth his salt.

the only sam is nelson
Reply to  Taking The Mik

Don’t forget his passing, which was often crisp

Richie
Reply to  the only sam is nelson

when the ball was mashed to him he could often wedge it to the ground. potato.

Hurley
Reply to  the only sam is nelson

Always seemed to be carrying a chip on his shoulder though…

Ox
Reply to  the only sam is nelson

Ox
Reply to  the only sam is nelson

He heard plenty of salty language after missing chances. However, he never looked ruffled.

Rich
Reply to  the only sam is nelson

It’s good that the transfer business is getting salted out.

Rich
Reply to  the only sam is nelson

It’s good that the transfer business is getting sauted out.

Have Arsenal really reported Citeh for tapping up by the way?

It’s weird that with so many ex arsenal there they behave like such wankers. Marwood, Platt, Paddy V… They ought to be a bit more respectful than that.

Vela? Lovely to watch but just a bit too lightweight to cut it week in week out against lumbering cunts like Shawcross, Hutton, Taylor et al. Good luck Carlos, adios and muchos gracias for the chips

Nick
Reply to  the only sam is nelson

OT, but it was about a year ago that the fucking Dodgers were going into Chapter 11.

Ayyeee I support 3 clubs on this list. Yay for the Yankees, NY Giants, and Arsenal!

CAGooner, my reaction exactly. HOW DID THE DODGERS MAKE IT!

They got a consortium together (including Magic Johnson) to buy the Dodgers. Kinda ironic that Stan Kroenke tried to buy a piece of the Dodgers but failed.

More proof that US sports aren’t comparable to the European football leagues: When was the last time the Redskins won anything – or looked like winning anything?

Fed Ex field (Washington Redskins home field, owned by the team) currently has a capacity of 79,000. Previously, it was 91,000 until they removed part of the upper deck and added some additional suites. The team averaged almost 77,000 attendance in 2011. Granted, they have looked awful lately, but their rookie QB looks very promising. I think that has more to do with their valuation than winning something like a Carling Cup (of which there is no equivalent for in the NFL). By and large, American sports do a better job of creating the whole “fan experience” and supporters spend… Read more »

Did we meet the enchilada cause we were holding out for?

clause! Dang-it…I feel like a retarded young footballer who doesn’t know how to spell check or use common capitalization! NOOOO!!!!!

Sad to see him go. Arsenal and the EPL in general have far too few Latin Americans. At least we have Santos plus Martinez and hopefully coming through.

Galindo wellington botelho santos martinez campbell denilson and vela i dont call that too few. its just a shame we cant buy them when they are the finished article.

Thanks Vela for your service to the Arsenal. Best of luck for the future. We are counting on your performance at Real Sociedad so u could earn our massive pay.

I mean so we could earn our massive pay cut

“Carlos Vela in talks with Real Sociedad”
Mediawatch not getting enough hits for the site?

It’s not strange arsenal post the news that vela is in talks with Real S because Real S on their official site already announce that they have reach deal in principle with arsenal for vela .

Carlos Vela pens a four-year-deal with Real Sociedad
http://www.goal.com/en-gb/news/2896/premier-league/2012/07/17/3247856/carlos-vela-joins-real-sociedad-from-arsenal. Where on earth do goal.com get their info from?

It’s been in the Spanish press all summer that a 4 year deal was on the table – see here – http://news.arseblog.com/2012/07/young-french-striker-offered-trial/

They’ve jumped the gun slightly but they’ve just added info already in the public domain to Arsenal’s statement and written the story.

Does anybody else feel when Arseblog says something it’s automatically correct? I mean he could say Arsene was English and not French and I wouldn’t second guess it.

“Headline: Dull statement made about a player”

It’s about fucking time this deal gets done. I’m sick of this dragging on for so long.

I thought he should’ve been given a chance when he started the season with three goals in 2010/11 and was given the number 11 shirt.
I thought he looked pretty good.
It’s a bit of a mystery to me why he wasn’t given more of a go, seeing as others who failed to convince at all have had more than their fair share at times.
After that it seemed pretty obvious he wouldn’t get another chance.

Maybe when Wenger told him to pass him the chips, he chipped a ball to his face.

Or chipped a pass

u fucking made me choke on my chips……

Shame it didn’t work out for vela at arsenal. But I won’t gnocchi him (sorry!!!!)

Sorry if I waffle

the only sam is nelson
Reply to  Wingers

Where does the bit about the 50+ percent sell-on clause come from? Any real evidence on this or just hopefulness?

Now for the GSTEL, though I’m not holding my breath as even his dad seems eerily quiet.

Who’s the kid with the hair visible in one of the training pics? Pic not very distinct on my screen but looks like orange, vaguely Song-style hair and deep bronze-coloured skin. Could he be the kid from Caen?

Darn! The one day I don’t read CarlosVelaNews, something pops up on the Arseblog.

Somewhere in Hillsborough, New Jersey, USA there are is a tear soaked Vela Arsenal shirt. I know this to be true – I’ve seen someone wear such a thing.

I don’t know what’s sadder…owning a Vela shirt, or living in Hillsborough..

I want to like your comment but as a fellow Hillsborough resident I must pass. I like its idyllic farms, pastoral grounds and woodsy parks. And I like it even better knowing there’s another Arse fan in the neighborhood.

Your allergy to vowels must have you in consonant pain

the only sam is nelson
Reply to  fisher

did your cat sit on your keyboard?

Oh it’s so heartening to see a text speak crap comment get deleted.

Please, God, let Chamakh and Park be next.

We´ll miss those Carling Cup evenings where your cheeky goals and obvious promise left us with a warm feeling inside.

But somewhere along the line you started playing like a burrito (and not in the Tony Adams sense of the word) and seemed more interested in organising parties with tranvestites than getting your career back on track at the Arse….

Oh well atleast there’s positive news about being able to sell our players rather than loan them. It’s about time the gooner grove rent a player closed down.

Fuck all the doom…Lets be optimistic about the new season…two very good forwards signed, Wilshire and Diaby back.., Ramsay will improve, Coquelin and Lansbury challenging for places, Afobe too maybe after his showings at the U-19’s. Chamberlain a season and Euros older can only be a good thing. TV has had a good summer rest, Koscielny has been away with the French squad and did himself proud, Arteta and Mert back fit , Gibbs getting stronger it looks, Santos settling in..shame about Sagna but hey…… Im hoping for big things from Gervinho this season, and maybe Arshavin, why not? Judas… Read more »

[…] the club took the unusual step of announcing that Carlos Vela was in talks with Real Sociedad last night. The story has been going on all summer, the Basque club really want to keep him after […]