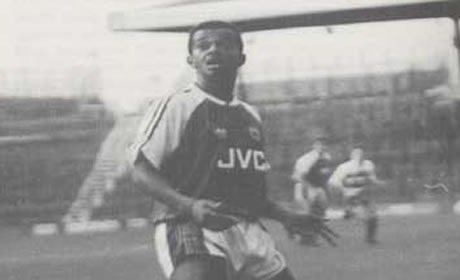 Former Gunner Kwame Ampadu has re-joined the club as an academy coach.

He joins from Exeter City where he has been under 18s coach under manager Paul Tisdale. Speaking to exetercity.co.uk, the former Republic of Ireland U21 international said, “I am delighted to receive a fantastic opportunity like this at such a huge club and I was really really happy to get the offer.

“I’ll be predominantly working full time with the Under 14s to begin with at a club where I spent three unbelievable years from 1988 after coming over from Ireland aged 17,” he said.

“Everyone knows the sort of club Arsenal is and what it stands for and luckily enough the way we try to play football in our youth set-up here at Exeter, trying to get the kids to pass the ball, is what they do there as well.

“Arsenal have a reputation of blooding young talent and City are very much in the same vein, if the managers think the players are good enough then they’ll play them.

“There are plenty of legendary figures throughout the set up at the club and I’ll just be going about my business quietly and keeping my head down!”

Midfielder Ampadu played just twice for Arsenal, coming on as a substitute against Derby County in a first division clash in February 1990 before making his final appearance a week later against Everton.

He was tranfered to West Brom in 1991 and also played for Swansea, Leyton Orient, Exeter City and Newport County.

Kwame reminds me of history class. Let’s see if he can show the boys the future.

True testament to the saying ” you never really leave Arsenal”. Welcome back!.

Fuck me, you know you’re getting old when you remember Bumping into a young trainee called Kwame Ampadu on the steps of the old east stand entrance. Great soul glo hair and Kool and the Gang moustache I recall.

Watched ‘Pat’ Ampadu many times down the Vetch for Swansea City in my youth. A truly committed midfielder, I hope this rubs off on the youngsters to get them ready for the First Team

Solid workhorse midfelder, and a bit of a nutter if i remember his time at the swans.

Eddie Magoldrick to coach the Under 2’s?

Eddie McGoldrick, the start of Georgie Graham’s demise. Flog The Super Swede and bring in Eddie and Jimmy Carthorse.

Then the cherry on the cake Glenn helder. The Dutch Lionel Ritchie

Under 2’s?, rvp will take care of that, he is all about looking to the future.

No RvP would be an agent. He does not agree with club’s way forward. This is good for his wallet.

Never thought ide hear that name again. A real blast from the past.
Nice to see that he was still earning a living from the game.

that’s the north bank in the background, there… *wipes tear from eye*

ah those were the days

Anyone remember Steve williams that guy was filthy ?

an outsourcer writes...
Reply to  Goonersville

i remember going away to st james’ park in november 1988

Goonersville
Reply to  an outsourcer writes...