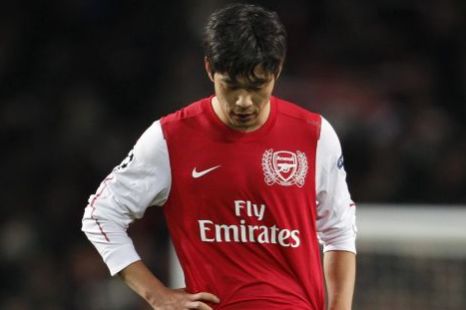 Reports from the Gulf (heh, yeah, we know) suggest that Emirates side Al Ain are in talks with an ‘Asian striker from Arsenal’.

Although Ryo Miyaichi might fit the bill, the likelihood is that Park Chu Young is being targetted for a season long loan. The South Korean captain joined Arsenal in August last year but failed completely to make a breakthrough to the first team.

Although there are sure to be depatures from Arsenal’s forward line this summer, it seems unlikely that Park would be anything more than a bit part player next season.

For the sake of his own footballing career a move would be in his best interests, and given the amount of goals he scores against Arab sides while on duty with his country, Al Ain might be the perfect fit.

Cheers to @RYO_cleverfish for the heads up

It’s the best for all party. Arsenal can left him from the squad list, Al Ain might get a potential top scorer base on his record, and Park might restore some.of.his reputation for his country. Hope this happens.

Ain’t it amazing though how park always seems to find the net for his country. He never disappoints. He’s a decent player who never got his chance or never really worked hard enough in trainning thus no place the team. Oh well.

I apologize on behalf of the club, Park! I think you deserved more chances to prove yourself. We ruined a years time and that is a lot in football.

But never have you spoken anything against the club and have been an absolute professional and I respect you a lot for that.

Apologize for what? The guy obviously tried to cheat with his military duties and got the FLM add-ons, he deserves everthing.

You obviously know very little about the player.

And you very obviously know nothing about Korean military service, although it’s a big issue here , in Korea, seeing as I’m Korean, as well. Let me explain. Park came to Arsenal, but realized he wouldn’t have a chance to really play for any team in two years, because two years later he’d be dragged to the Korean army football squad (Gwangju Sangmu). He decided to put on an appeal to dealy his military service until he was in his thirties. How? Using the Residence Visa System, because of his years playing for AS Monaco, he was able to obtain… Read more »

@prhyu: Nice round up mate! Although I get some bits of the Park situation, I still wonder why he was almost never used as a sub? Also I especially wonder why he has never stated that he’d like to play more? I mean given his situation, I think it would have been pretty legitimate to show he’s unhappy with the playing time he was given. I wouldn’t “mind” if he’d speak “against” the club because, as a footballer, that is the thing to do when you’re unhappy. Let’s just remember this transfer as an example of what can go wrong… Read more »

Maybe he feels it’s not his place to criticise his manager and club, or to complain publicly about what we view as a failure to give him a fair chance.

He’s kind of an anti-RVP. Funny that he’s always getting hammered on here for being everything that RVP has turned out not to be.

Fair points about him being professional and not complaining but I don’t think we need to apologise for anything, He made the decision to sign for us.

Good luck to him wherever he goes

He agreed to sign for us, but I expect he was led to believe that he would play a few Premier League matches for us.

You’re obviously out of this world. Park earns a lot and he doesn’t need to do anything for it. And how do you know whether he is an absolute professional, do you visit the trainings?

I feel extremely sorry for the guy, his ‘English’ experience has been a complete non-event, but as the previous posters have said, its for the best; we can free up a squad space and look to bring in ‘improvements’, which lets face it, we are all hungry for that.

We are pretty much a failure at using players from Korea or Japan in our first team. You’d think that we might have been able to give Park, Miyaichi and Junichi Inamoto more than a dozen games between them. Not one of them saw / has seen even a substitute appearance in the Premier League for us. If you want to have commercial success in Asia, don’t take some of their best known or best up and coming players and take the piss out of them by never playing them in a match televised in Japan or Korea. Might I… Read more »

All the best Park !! your goal against Bolton was class !! hopefully we dont have to see your sad face in the bench and you can enjoy football wherever you go !! cheerio mate !! 🙂

So none of the strikers gonna remain?
Bendy,vela,chamakh,park,persie and even arshavin.
Thats 6 forwards going out.

Fairly sure Podolski and Giroud are staying, bro.

Hope they weren’t signed to one year contracts!

with the combined sum some new guys can be bought.esp an attacking mid.

It’s all calculations to you Indians, ain’t it? Need a calculator??

It’s all banjos and inbreeding for you backwater rednecks, ain’t it? Need a bum toy??

Naughty Al2.0 and Naughty Bunburyist. Play fair or get a smack on the botty.

A season long loan would be great. I dont know why but I feel that Park still has a future at Arsenal. 100% not this season but maybe 2013-14. Let him have this full year to get back to fitness and break into the South Korean team again and the loan is over then we can decide to sell or not. And if it is sell I would suspect it to be easier as clubs will be looking at him during the loan as well.

Good luck Park. I loved editing his wikipedia from time to time.

Isn’t he a free agent after this season? Or, since he was transfered during the winter, we will have him for another “half-season”?

Am I the only one that was misled by the title and thought we were signing another striker called Park?

Good luck to Park, whatever happens I wish him all the best.

Ha good point on the Arab sides Blogs. With his international record, they are probably like,”Holy crap how can we get such a fearsome Asian warrior so easily!??!?!?!!” Why can’t we do things other than loan players though? Seems like a waste.

Best for all parties? Are you fucking kidding me? Best for Al Ain, maybe. Arsenal has no fucking idea what they’re doing with Park. First they sign him. Then they don’t play him. Then they pass him off to Al Ain saying it’s a good buy? What bunch of pricks @ Arsenal. Arsenal will be stuck with Park for better or for worse, or just send him on a loan to another Premiere team.

[…] to Arseblog News, Park has been linked with a move to Al-Ain and he could stand a chance of earning big bucks in that side of the world. Recent transfer […]

Another rumor? Well, if we’re going to have rumors, here’s one: Pele just underwent monkey gland treatments to restore his youth and now he’s playing like in was 1970 all over again, and he’ll be coming to Arsenal to take the number 10 jersey.

So even with those treatments he’s only got one year at the top of his game and then he’ll be on the long slide to American football again? Oh was it worth it? I hope it didn’t hurt? Probably hurt the monkeys.

So if we have signed him to a one year contract does that mean he’ll be off to Man Shitty by the end of the summer?

…and there was me thinking the title was a really clever way of saying that Park would be LANS as we’ve never really seen him play anyway!

Well, if they are only rumours and big talk from the Emirates then perhaps he is destined to be the ultimate LANS.

[…] Chu-Young (or maybe Ryo Miyaichi) is being linked to a UAE side Al-Ain.  Meanwhile, Ryo is definitely being linked with Ajax Amsterdam.  That would be an excellent loan […]

Trying to think of my favorite Park moments for the gunners.

Well it was either the goal against Bolton Wanderers, or you’re just trying to be funny while taking the piss out of Park while you’re at it.

Wish him the best of luck as he has been dignified not saying anything to press even though he did not have the impact we all hoped he would.