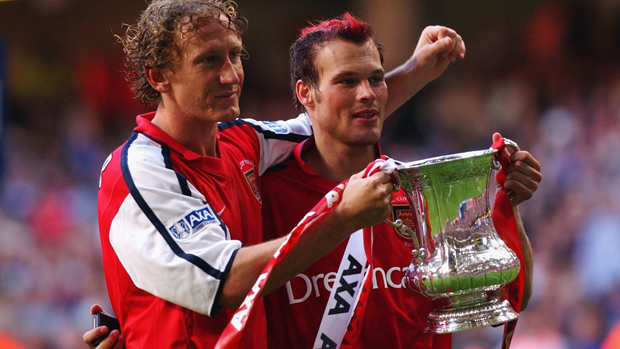 Loved by Arsenal fans the world over for his nine year spell at both Highbury and the Emirates, the Super Swede with red hair, panther tattoo and Calvin Klein pants will be especially remembered for his match-winning performances in the 2001/02 Double winning side and his role as one of the club’s ‘Invincibles’.

It’s hard to believe it was 14-years ago that a scampish 21-year-old, looking more like a lost punk than a footballer, took to the field as a sub against Manchester United and promptly opened his Arsenal account by lobbing Peter Schmeichel. He became an immediate terrace favourite and stayed that way until his departure for West Ham United in 2007.

While he continued his great goal record against Manchester United throughout his time in N5, it was his swashbuckling run and deftly curled effort in the FA Cup final against Chelsea that most Arsenal fans will forever cherish. It was one of a number of notable goals he scored; efforts at the Reebok Stadium and Anfield also coming to mind.

While injuries took their toll on his productivity on the field and the telepathic relationship he appeared to have with Dennis Bergkamp, Freddie remained a popular figure both in the dressing-room and with the tabloids. Most importantly though, even when his hair receded his song was still sung with gusto on the terraces.

Speaking about his decision to hang up his boots (and possibly fancy pants), the Swede told homeland publication Aftonbladet that he would always look back with fondness on his time as a Gunner.

“Football has given me an awful lot, but what I can bring up is the special feeling that existed at Arsenal.

“All the players in the team were top three in the world in their positions, but everyone was nice. We were a bunch of guys who had a great time.

“There was no prestige and when we won the league and cups everyone was included in the pictures.

“We were like a family. When we won something and you felt that togetherness… That feeling I don’t think I will ever get to experience again.”

Asked how he would like to be remembered, he responded:

“Like a guy who always tried to be humble and always gave everything for the teams I’ve played for.”

Trust us Freddie, you’ll be remembered for that and a whole lot more.

Thanks to the team at Goon Rambler for the translation

A True Legend. They don’t make them like they used to.

Indeed! I hope he has a fuckin’ excellent retirement. Well earned and deserved.

To re-visit just what a legend he is, I just watched the 49 unbeaten video. A true legend. Invincible!

I will never forget his bursting runs into the box, and ofcourse, that amazing FA cup beautiful curler after muscling past Terry. True Legend.

What’s a Terry? Is that some kind of cunt?

What a fuckin player. Now there’s a legend.

My boy, born in 2002, has the middle name Fredrik in his honour.

Though had he also had red hair, there’d have been a massive steward’s in our house.

My best memory of him is the run in to the 2002 double, the way he timed those little darting runs for Dennis to slide a pass through, to score vital goals week in week out was outstanding and unplayable. And then that strike in the cup final, what a peach. Thanks Freddie.

I hope fans really remember how great Freddie was for us, constant goal threat, worked so hard for the team and incredible jaw line!

Happy retirement Freddie, one of my club hero’s for sure!

Remember his Fa cup final goal vs Chelsea? Yeah the one in which he made John Terry fall like John Terry.
http://www.youtube.com/watch?v=TVEJj4ypvC8

Another genius signing by Wenger…about a fiver from the Swedish first division !

a member of the greatest team ever, what a player. Legend is a word overused, but he always will be one, an Invincible 🙂

The phrase ‘legend is a term overused’ is a phrase overused these days.

thats why i changed it up a bit, and replaced term with word. i would say that it was a touch of genius, but genius is a word overused these days

One of my all-time favourites. Happy Retirement, Mr. Ljungberg!

Thank you Fredrik, we love you!

Freddie will be coaching at Arsenal next season, hes coming home http://​www.sportsmole.co.uk/​football/arsenal/news/​ljungberg-given-arsenal-coa​ching-role_41346.html

goonero
Reply to  matty b

I want this to be true, I want all those guys back at the club in some capacity…except for viera…he has only gone and soiled his brilliant red with sky blue and oil stains

matty b
Reply to  goonero

Especially Freddie, my favourite player, along with Lauren and of course King Thierry.

The source there probably isn’t the best, but hopefully they’re not bullshitting and its for real!

Peter
Reply to  matty b

Don’t believe everything you read on the internet – it’s not true. The tweet used as the source for that story came from a fake Twitter account @ljungberg_f, which has since been deleted.

we love you freddie
cos u got red hair…

Came to Arsenal with no reputation and left an Invincible.

Favorite Freddie goal was Bolton away assisted by God. Classic.

Probably my most favourite player of all time. Not the best player in the team (that’s not an insult to him by any means), but absolute quality and I absolutely loved him.

*sniff* Thanks for all the memories, Freddie.

My fav was His ‘ricked’ shot off of barthez which fell to WILTOOOOOORD!!!!!!!
That was some night at old Trafford- champions section!

I remember my mum always telling me he wasn’t very good because she thought he missed too many chances. I would always retort, you just don’t get it mum. His running off the ball was amazing and he always scored when it mattered.
Legend.

Wish my mum knew who ljungberg was :/

Massive respect to another Arsenal legend! Freddie is one of my all time favorite players. There is already talk of him being part of the coaching staff at Arsenal next season. I truly hope to welcome him back to Arsenal in a coaching capacity.

Knew where he needed to be and had a terrific engine abd burst of pace to take him there. I was always a fan of his because he was not the biggest, fastest (though he was damn fast) and did not have the best technique. But yet he was a special player nonetheless. My only replica jersey is his no. 8 from the invincinles season (yellow away, long sleeves).

Surely he must become one of our coaching staff now! Sign him up Arsene…again.

undoubted legend, one of my favourite arsenal players ever

making john terry slip, the invincibles and of course WILTOOOORD

Manchester United heave a collective sigh of relief as their tormentor in chief retires.

Fucking excellent gunner, I recall that awesome goal against chelsea after doing terry good. I was in the house that day, needless to say I broke a few things. I remember a bulb, a vase….some shit.
Great memory right there, worthy of a legend.

Just the buzz of singing we luv u freddy. it seemed those days that all the fans the players and the club were as one. now we are so divided its no wonder players want to leave and supporters are not renewing. My son was 9 the other day he has been brought up a staunch gooner but its so hard to answer when he says things like what was it like in the old days dad, u know when arsenal used to win the league? and do u think we will ever win something dad? honestly sometimes i see… Read more »

Just tell your son that we are going to win big very soon. I can feel it…..
COYG.
And yeah Fredrik thanks for the fuckin excellent memories….

We love you Freddie cos you’re Arsenal through and through….

Freddie you were the bollocks! Even when you weren’t wearing those Calvins!

“I tried not to upset the AFC fans by going to West Ham instead of Spurs and Man Utd. It’s a big shame RvP chose United.” – Ljunberg

That’s why he’s a legend.

there you go. miss the guy(s)
http://www.arsenal.com/news/news-archive/ljungberg-announces-retirement-from-football?utm_source=feedburner&utm_medium=feed&utm_campaign=Feed%3A+arsenal-news+%28News+Feed%29

Very underated compared to Pires, Henry, Bergkamp and Viera, but so sooo important. We have been missing exactly this kind of midfielder for the last few years – someone who consistently scores when its only the keeper to beat.

(His link up with Bergkamp was something special too)

But he was never ever underestimated by those that mattered the most, his gaffer, his invincible mates and us Gooners, we miss you Freddie

respect for freddie.thanks for those magical moments.arsene please find another freddie.. real wordclass player, in big games just when it matters freddie was present. except cesc (to a certain extent though) we have lost those kind of players for the last 5 years. our defense is …well it’s a pain hope bould coaching would boost them.our midfield is ok but no big games winner.hope santi is one of them but he is no xavi nor iniesta let’s be realistic and the attack can arsene do a thierry miracle with podolski cause that guy was fucking brilliant before bayern almost killed… Read more »

Ah, Freddie, there was nothing pants about you. Pure class.

My favourite memory was an awesome all-round performance against Juventus in the CL in December 2001. Another fantastic “Bergkamp connection” goal was just the icing on the cake, he gave a top Italian side nightmares for the full 90.

When we finally find a similar type of energetic, box to box action hero, we´ll almost be ready to challenge again.

Thanks for the memories, Ljung-buster…

Best of luck in your retirement freddie, you were a true arsenal legend and a joy to watch, I was lucky to see him for 3 seasons close up as a clockend gunner and they are great memories, it’s a shame there’s not many of your kind around today, you gave everything for the gunners and hopefully you come back to the club in some position in the future, LEGEND

Absolutely love how well he’s remembered on here, good work guys.
Importantly, he had the best song we’ve come up with for a long time

And when things start like this, it has to be good

one of my top five favourite footballers.

Will never forget the shock on my poor old mum’s face when i came home one day with my barnet dyed bright red because I wanted to look like freddie.

What a player now theres one or two in the current set of player’s who could learn a thing or two from this guy. I mean the way he latched on to through balls but once he got there he had the presence of mind to either lay it on or finish. I wouldn’t mind seeing him coaching the pace men at arsenal now whats wrong with that?

Forever a true Gooner icon! Hope u return as part of the coaching staff someday. Much luv, Freddie!

Freddie who? A nobody from the swedish league making his debut against man u….and his legendary status begins n will live forever!

Is he worthy enough for Arsenal to have a testimonial match? I think so. Most likely Bergkamp would participate which is further incentive to have one.