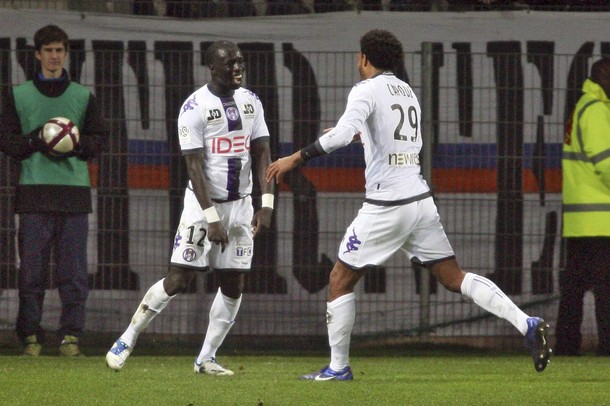 Toulouse left-back Cheikh M’Bengue claims that Arsenal are interested in signing him.

The 24-year-old Senegalese international claims that contact from the Gunners has taken him completely by surprise, but that a move to North London would be impossible to turn down.

“I did not expect it at all. When a big club like that think of you, it’s nice, but we are surprised more than anything else.

“Of course, the Premier League is a league where I want to evolve.

“I still have two years on my contract and I’m a key player here. I have no clause or agreement to leave – but Arsenal is something you cannot turn down if everyone is okay.

“I hope he [club owner Olivier Sadran] won’t block me if an interesting proposal comes up. Arsenal would be awesome.”

News that we’re chasing a left-back does come as a surprise given we’ve both Kieran Gibbs and Andre Santos able to fill the position. That being said, having seen the Brazilian operate as a winger in pre-season and having witnessed the cuddly maverick’s complete disregard for defensive positioning it’s possible that Wenger is playing it safe.

How good is he? Any info on him on youtube?

I bought him on Football Manager and he was excellent.

Does this answer your question?

Good to get another defender…..didn’t think it would be a left back though!

Agreed. I thought (hoped) we’d be signing a RB, but now it looks as if Wenger will keep faith with the raw talent of Jenkinson. Another LB? Seems strange. Can he play on the right as well?

We need a right back for God’s sake….can’t the fool Wenger see that…jenkinson ws raped by city in China…and we have igansi miquel who could fill in at left back too …the mystery tht is arsene Wenger’s thinking continues

a gunner
Reply to  straight talk

E9 Gunner
Reply to  a gunner

I think Wilshere is the physical replacement for Song, lets face it were not getting another player from outside the club to replace Song, especially when Wenger has options like Wilshere, Frimpong and Coqlein.

Andrew Morgan
Reply to  a gunner

If Wilshere is the physical replacement for Song it would be ridiculous. To squander a player with that much ability in a defensive position would be a travesty.

Anyone who calls themselves a true Arsenal fan and yet goes around publicly calling our most successful manager of all time a fool, only needs to look closer to home to find an actual fool. A mirror or any reflective surface might be a good place to start the search.

That kinda attitude , calling Wenger ‘ a fool ‘ , can get a man shipped off to Man United pretty damn quickly, round these parts.

I remember a fella not so long ago, what was his name / Anyhow that’s not the important bit, fact is he is not here anymore !!!!

Arsenalkid700
Reply to  What's my name?

Rubbin that Penis I believe his name was.

TeeCee
Reply to  What's my name?

Insight
Reply to  What's my name?

I totally agree. These foolish people can only see a few trees of shortcomings but fail to see the grand forest Arsene Wenger has established here.

This is the player talking. I could inform SSN that The Arsenal want to sign me as the new defensive midfield player. It doesn’t have to be true for SSN or one of the comics pretending to be newspapers will print anything to fill a few column inches. It is highly unlikely The Arsenal will want to sign me, even as a sweeper upper as I am about to hit 61 years of age. Ignore all this shit and wait until it is confirmer on the official website. Less chance of a heart attack or having stupid comments blocked on… Read more »

On the one hand he`s imagining a man as being raped and on the other he calls it straight talk…. the mystery continues…..

Jenkinson was probably the best of the back 4 against Sunderland. And last season, except the 8-2 at Old Trafford, he always put in a decent shift. He has a teriffic cross in him. I can understand criticism for someone like Squillaci or Denilson. But all this “effigy-burnin rage” on Carl is way over the top.

Can he M’begue to come to arsenal first before we consider any bids for him.

Awful morning I must say. Chilly outside too. *coat.

I don’t quite remember a single player that lets out the news that we’re in contact/interested actually moving to Arsenal.

Sadly, I do. Marouane Chamakh.

It is what it is
Reply to  bard

It is what it is
Reply to  bard

Arsenal have contacted him? There’ the small matter of agreeing a fee with toulouse (very difficult) and freeing a squad place for him (seems fairly straightforward, what with all the deadwood and rotten skunks leaving)

Mbengue will probably be understudy to Gibbs. Which means we might see Santos play left-midfield this season – more suitable to his playing style TBH.

I don’t believe we need defenders that are worse than Gibbs.

Whilst I agree that we do need a RB that can fill in for Sagna, I believe our LB’s are the weakest first team players in the squad, and really if Sagna’s coming back in September, we shouldn’t miss him much, and it would be better to improve areas rather than provide back ups.

This is like the old Championship Manager, when you make a couple of big signings suddenly everyone and their dog is linked with us.

A holding midfielder is now a priority then a RB then maybe a LB.

Classic Wenger. Feigns with the left and hits you with the right

that is such a top comment I sprayed tea everywhere !!!

what’s RvP’s berk rating? Just to give me an idea of how accurate that game is…

or.. then sing this after one of them score a goal.
http://www.youtube.com/watch?v=kdAj-dBNCi4

But then we would be obliged by comedy to come out to mmm’bop by hanson. Which would be bad, because then I would have to perforate my own eardrum with a rusty knitting needle

I think I would have to do so with either of the aforementioned two songs.

Would have to rename the club M People

Replace “Arsenal” with “I”, and “me” with “a better contract”, and I think you’ll have a more accurate headline.

When anyone criticises Arsene Wenger, the club, players or the board (well maybe not the board!) why do twats throw around the ‘If you were a real Arsenal fan… blah blah, go support them lot in N17’ What a crock a sh*t! Makes me laugh you can praise all the above but when it comes to actually calling them into account people go and spout a load of old bollox. Use your brain people, try and think for yourself – you don’t need to be spoon fed. It’s about having an opinion and not being given one. FFS! Anyway on… Read more »

Tommi, fact of life: you cant please all the people all the time.

Well that’s it then. The new cunt has official gone:

“It’s an honour to sign for Manchester United. I am looking forward to following in the footsteps of so many great strikers, bringing my experience and playing my part to help the team compete for the biggest trophies in the game. I can’t wait to get started.”

And I look forward to you being Frimpong’d for the rest of your career.

Frimpong should learn how to pass the ball instead of getting sent off.

The weakest area of our best starting 11 is left back, Arsenal/Wenger should spend whatever amount of money is needed to bring Leighton Baines to the clubs.

‘evolve’? I hope he doesn’t use us as stepping stone.

Can we just get rid of Jenkinson?

I dont give a fuck how many posters he has on his bedroom.

Until the ACN is once every 4 years and not during the middle of our season, I’d rather not see us sign any more African internationals.

It is so frustrating, isn’t it? It’s one of the things that makes losing Song palatable. He’s gone anyway every other year, and during a particular crucial time of our season. I wonder if this is part of the reason Wenger has been gradually shedding Arsenal of African internationals in the past few years?

This guy shut down Eden Hazard when I was playing in career mode with Lille on Fifa 12. Obviously Wenger plays Fifa too.

The last player that did this is reportedly signing for Everton. Profile seeking mugs.

“Of course, the Premier League is a league where I want to evolve.

The only true word he spoke.

I’m waiting for the inevitable article stating how Sp*rs are now interested in him.

[…] up to it, in the case of Jenkinson, or not a full back at all, cue Santos. Senegalese left back Cheikh M’Bengue has been linked recently. With Kyle Bartley having moved to Swansea, and Squillaci’s […]

[…] (even for hilarious name japes I think we should do this), Ligue 1 defenders Mapou Yanga-Mbiwa and Cheikh M’Bengue, Isco from Malaga, Newcastle’s Yohan Cabaye and, naturally, Yann M’Vila (the latest to […]

As It Dey Hot

[…] (even for hilarious name japes I think we should do this), Ligue 1 defenders Mapou Yanga-Mbiwa and Cheikh M’Bengue, Isco from Malaga, Newcastle’s Yohan Cabaye and, naturally, Yann M’Vila (the latest to be added […]