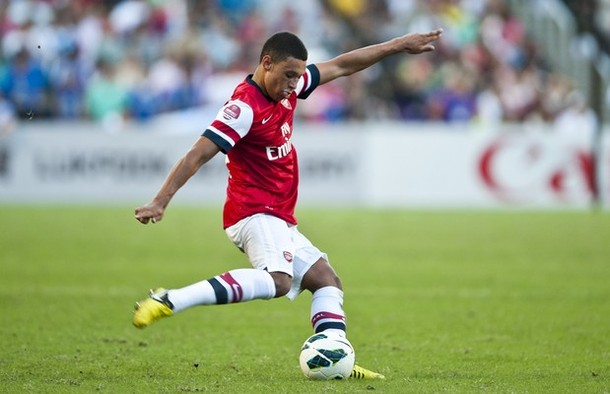 Arsene Wenger has confirmed that Alex Oxlade-Chamberlain should be back in the squad for Sunday’s clash with Stoke but revealed that Laurent Koscielny will not make the trip to the Britannia Stadium.

Both players missed the opening day draw with Sunderland but appear to be on the mend. No other players are thought to have picked up a knock since last weekend, although the boss will likely give a clearer update to the press at tomorrow’s media quizzing.

” [Alex Oxlade-Chamberlain] should be back in the training group from Friday. He has not practiced with the team yet. But he should be in the squad for Stoke.

“[Koscielny] will not be back. But he should definitely be back next week. So he should play in the game after Stoke [against Liverpool].

“Touch wood, we have no further problems apart from the guys who are out in the longer term.”

How do they(Arsenal.com) release their news on the website? Was the interview about ‘youth revamp’ done the same time as the injury update one? Or they jusy dismantle the interview tape and make into into a gizillion news?

The latter, I think: one all-encompassing interview broken into bits and trickled out as news.

and is it direct quotes?

i cant remember hearing arsene ever refer to ‘the guys’, doesnt sound like him at all.
‘the players’,’the team’, etc but not ‘the guys’

Fergie the Gooner
Reply to  Bee

I think there was someone else at the club once that used to talk about ‘the guys’. Can’t remember for the life of me who that was… Doubt he was as important as Wenger though.

Hopefully the ox can unlock the defence at Stoke when their legs are tired. we really need a win this weekend and a couple of goals to boot!! COYG

Speaking of boots, i’d really like vermaelens up shawcross’ chin. I’d enjoy that.

I think Diaby is better at that. That Cunt Terry kick is one of the best moments ever in the EPL.

It’s about time we turned these cunts, over at their gaff.

Pulis – fuckin Twat in the Hat.

in other news, news on Sahin doesn’t look as sunny as it did yesterday:

>Brendan Rodgers on Nuri Sahin: “Hopefully in the next 24 hours we’ll get some confirmation on that. It’s quite far [along the line]. He’s a very good footballer.” More to follow…

Seems like our insistence on a permanent deal clause hurt our bid. I can see why we wouldn’t want to invest (time and game) in a short-term loanee for a player with no PL experience, sad that it is turning this way nontheless. Wish Nuri would put his foot down and choose class.

Apparently the player’s agent arranged a deal with Liverpool in case our bid falls through. However, I’m hopeful that we’ll reach an agreement, given that Sahin clearly prefers to play for us

I saw that. Worried, but Liverpool are really in dire straights – they barely managed a win against Hearts tonight. Sahin would do better to come to us, and I think he knows that. Mourinho scum knows that he’d get more playing time at the liverspuds.

But if he doesn’t make it into Arsenal’s XI would Mourinho still be interested in keeping him? I mean, assuming Cazorla (and Ox) will take the front of midfield, that’d leave 2 mid slots mainly contended by Sahin, Arteta, Diaby and a recovering Wilshere. And Arteta and Diaby are just not the kind of high-profile players Real would sign (not a comment on the players abilities, but on Real’s dumb signing policy of favoring stars over team players). Perhaps Sahin is the team player we need, maybe that’s why he hasn’t done well in Madrid. Also, in Arsenal he’d surely… Read more »

I read that more that there’s going to be confirmation as to where he goes in the next 24 hours. I can’t imagine that Sahin would pick to go there, with us he has a chance at champions league football, a better stadium, and a manager who is much more renowned for developing talent.

plus liverpool is just a hopeless pit of despair

50 Shades of Ramsey
Reply to  alex

apparently we’ve ended interest, hopefully we’re in for someone else tasty

Xanthias
Reply to  50 Shades of Ramsey

No source, no quotes apart from the Rodger’s one. Let’s wait.

Xav
Reply to  50 Shades of Ramsey

And we had apparently signed him last friday with a medical set for saturday, photo shoot on the same day. Official unveiling was to be on monday. But that as we know was a shit load of baloney curiously from the bbc. So this transfer saga is officially ageing my arse.

BBC is reporting that liverpool will pay more of his salary wage of 115 000 a week and also liverpool agreed 14 m pounds buy out clause so it’s not the permanent deal the problem the wages of sahin are and liverpool outbid us in that matter.

now i’m reminded why i never go youtube a player (not that i haven’t been an admirer of his at BVB) until we have a deal announced on the arsenal.com site itself. even at 15m he’d be perfect at the base of midfield, and lessen the burden on jack.
🙁

From his perspective it makes sense for his development I’d imagine he’d rather come to arsenal had we not bought cazorla as he’d be round about first choice for the AM position. At Liverpool he’ll play at a decent Premier League club and learn the rough and tough of the game like many continentally technical players before him. He wants games, and we won’t guarantee that to him in truth neither will Liverpool but he’ll much more likely walk into their team. We can’t guarantee him much more than Benayoun got last season so it seems the right decision for… Read more »

A Yank
Reply to  GunnerDareMKD

Ack.. can we win something? A match? A player’s signature? Haven’t we shed enough deadweight to afford competitive wages. I mean we can’t lowball everyone and expect not to get out bid.

And do these clubs even have scouts? Or do they just wait until Arsenal show interest, click over to youtube, then decide to outspend us by a bit. FFS, it’s getting tiring.

For such a tempting buy clause (cheaper than Song and he left for cheap) and such a promising player I don’t see why Arsenal can’t match what Liverpool is offering. If it’s not Sahin then we’ll need someone else for the mid anyway, so let’s make this happen and get it over with!

I’m always worried when we play the knuckledraggers.

A win – ANY WIN – without an injury will be considered a succesful weekend. Nothing else should matter.

“…plus liverpool is just a hopeless pit of despair.”

I’d like to see the poor boys face when he walks out of Liverpool airport and see’s what a sh*t hole the place is : )

Their punishment must be more severe.

.When Liverpool have crashed out of Europe and fallen from the Premiership. Then, Sahin, you have my permission to die.

Bane’s pit is in liverpool?interesting…

Steven Gerrard to Sahin (if he goes there)

“you merely adopted the dark…”

Bane’s pit is in liverpool?

Exactly. 3 points can only help the team confidence, and that’s what we need with all the changes.

(meant as reply to Rad Carrot)

I’m abit concerned for per, hope he does well though, I reckon the stoke game would be the perfect fit for bosscienly. Mr. no nonsense guy.
A win in that god forsaken stadium will give me joy, ultimate joy!.

He seemed composed enough against sunderland, not that he was exactly put under the cosh but still, we need him to shackle the beanpole striker.

Arse Is the best

Sahin has been signed 🙂

The ox…Probably the oxygen the team needs to come alive this weekend..Go Arsenal..
Sahin to Cuntpool? Not again wenger!

Goddamn near gave me a heart attack when I [mis]read “Koscielny set for Liverpool.” For a second I thought you were saying he’d signed for them.

After signing a five year contract with us a month ago?

Liverpool are experiencing a free fall like no other. I mean the team just can’t seem to get a result and if they do it’s always mediocre against mediocre teams. They have had an awful pre season and they are now even struggling out of the europa league group stages. I’m not at all fussed if we loose out on sahin but if we loose him to litterpool then i’d be like what the hell?. If it’s for sahin to decide it’s prettty evident arsenal is his choice but there’s a twat in there called mourinho, the guy doesn’t give… Read more »

Was just thinking if we play a midfield of arteta cazorla and the OX i think we should be very strong through the middle. If we dont land sahin we dont need another mid we need a versatile defender and we should be alright, if we get a solid mid then thats a bonus but i wont loose any sleep if we dont get one. In AW we trust!¡

I don’t know about you lot, but looking at a lot of these comments, they have 5 Thumbs up and 2 thumbs down…

By morning they will all have changed making you look like a total nutter.

I hope Poldi rips shawcross’s cock off and kicks it out of there shitty stadium.

Rise up le coq, rise up and fight for your place like the ox is.

Check this out… it’s a cached news article from The Guardian which was published an hour before the Sahin to Liverpool article….

I was wondering about that. It’s still showing up in Google.

But I guess they found out that Liverpool definitely got him and deleted it so they didn’t look like twats. Only cache exists…

Yeah… I love google cache. So good for things like this.

Whilst it’s likely he may go to Liverpool – it does make you wonder what exactly is going on, on what information is true and what is pure here say. I’d love a quote from Wenger.

Probably same old same old – Liverpool might have unlimited money to spunk on whoever, but we’ve got a stadium to pay down. Ho hum…

on another note, i hear that all premier league pitches have to be the same size this season. Meaning that stoke have no fucking chance.

Koscielny set for Liverpool???? We ARE a selling club!

Sky Sports reporting that Norwich are to get Biglia on loan, with passing mention that he’d been linked with Arsenal too. Really hoping Wenger has something special up his sleeve, although I’m more than happy with our 3 new players it would be nice to have a cherry on top

[…] with some early team news and it looks like Alex Oxlade-Chamberlain is back in contention, for a place on the bench at least, […]

[…] Arsenal, the news is Alex Oxlade-Chamberlain will be back in the team but Laurent Koscielny remains out with a calf […]

As It Dey Hot

[…] with some early team news and it looks like Alex Oxlade-Chamberlain is back in contention, for a place on the bench at least, […]