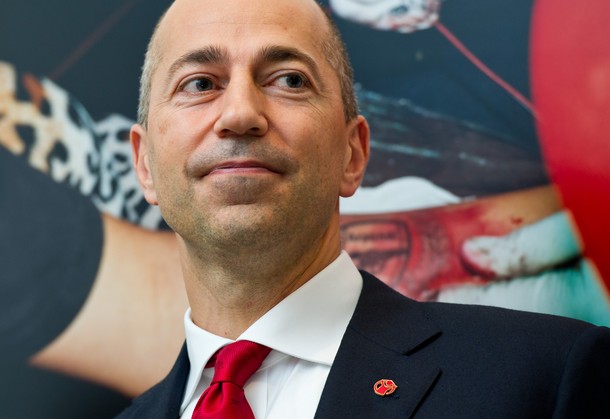 Ivan Gazidis has again stressed that Arsene Wenger has funds available to spend on player acquisition, but made clear that the manager does as he pleases without pressure from the board.

Apparently eager to play down suggestions that the Frenchman is being restricted from using the club’s full financial resources, the CEO stated:

“I want to be clear that the money we generate is available to our manager, Arsène Wenger, and that he quite rightly makes the decisions regarding how to invest those funds based on his extensive football knowledge, experience and judgement.

“Over the years, his decisions and his management have propelled us to the top of the game in Europe (currently ranked 6th by UEFA) while playing some of the most attractive football in the world.”

Defending the club’s policy of spending what it earns, and indeed the manner in which it seemingly stock piles cash, Gazidis forcefully stated the case for fiscal responsibility while highlighting the dangers of being drawn into an arms-race with rivals whose respective budgets appears limitless.

“We have faced criticism for sticking to our philosophy of living sustainably within our financial means rather than reaching out for a quick fix injection of money to solve all our supposed problems. But how much is enough to outspend others who have seemingly limitless means?

“We can and will forge our own path to success and avoid the many examples of clubs across Europe struggling for their very survival after chasing the dream and spending beyond their means.

“Football is moving powerfully in our direction. This season is the first in which UEFA’s Financial Fair Play (“FFP”) regulations come into effect. These regulations have support from all the leading clubs in Europe and UEFA have assured clubs that the rules will be implemented rigorously.

“I believe there is already evidence of changing behaviour from many clubs and this is good for football.”

NO VULGARITIES ON THE INTERNET

For being right 12 match ban

He’s obviously trying to leave behind a massive war chest for his successor. He knows how tough an act he is to follow. The next guy will need as much help as he can get. He’s a top top man, that Arsene Wenger.

Profit before tax was 36.6m and players’ trading constituted 26.1m or a whopping 70% of the PBT. If indeed AW was making all the decisions concerning the squad then his contribution to the club’s financial stability and viability is as immense as the footballing aspect. While Gazidis declared “…the money we generate is available to our manager, Arsène Wenger…” he also stated “At Arsenal we will look to ensure that these additional funds are spent responsibly to move the Club forward…” Basically, it means any AW’s decisions must fall within the boundaries set by the Board. Nothing wrong with that,… Read more »

I don’t know what to say after reading this Article, but it shows that Hill-Wood has got some class since he never said this when they “the board” where under immense pressure, but is saying this when things seem to be going in the right direction. The only thing that has been keeping some areas of the fans base quiet this time around is the manner in which we have started the season. I pray and hope we carry on like this all season so Wenger’s philosophy can be vindicated by silverware, and above all so I asafan can shut… Read more »

Why do you even have Chelski friends.

Also try debating to them about club history and how unfair pumping indiscriminate amounts of money at a football club and see how they tear up.

Emphasize the latter so they’ll get all pissy. Then when they ask you what you’ve won in recent years, sternly tell them off for diverting the topic.

Again, just remind them they won’t be anywhere near us if it weren’t for some Russian billionaire. In contrast, we wouldn’t be us without some great French manager, a fact we can be extremely proud of.

Just discovered the person talking was Gazidis not Hill wood, but was it my eyes or did the original caption read “Hill-Wood: Arsene is completely in charge of spending”

It still reads that.

Accident on my part, I initially attributed the quotes incorrectly. Apologies.

Chelski dont even own their pitch.
The supporters trust does.
That’s what money does.

clever supporters trust that. nothing for roman to leverage his “directors loans” without the big bit of real estate in the middle! 😉

I have a feeling the oil money will be of no use soon. Then we’ll be far ahead of those perceived to be ahead of us now. We’ll done on financial fair play. People can’t keep borrowing and borrowing…unless your a government….then it’s ok….because you can just print more! *sigh*

You do know how the economy works right? You can’t just print more as it’ll make the money you have now, more worthless. Your currency will then go down in strength and you’ll have to spend more to get the same items you get now.

It was a joke brotha…I live in the US…we’re the biggest idiots in the banking world. Besides greece!

Politics?! On Arseblog?! OUT!

(You had a good point up until then!)

Yeh, don’t let UEFA catch you discussing politics on Arseblog or else Wenger might get another 3 match ban!

Mancity are spending mega bucks on development. This, together with their amazing sponsorship will enable them to make hay.
FFP is bad news for the “smaller” clubs. The top four already inhabiting a different universe from Coventries (remember them?) and Boltons of this world.
FFP will widen the gap

The Loving Hands of Wenger

“I believe there is already evidence of changing behaviour from many clubs and this is good for football.”

We shall see what dem plans About this team

I just do not believe arsene was responsible for the signing of park last year. And is therefore not in complete control of all transfer dealings.

And financial fair play is and will be seen to be a joke. What’s to stop chelsea just as city have done signing a 300 million deal with let’s say abromovitch oil ltd or the like to sponsor the toilets.
Most privately owned clubs can do the same ,
FFP. Will be made a mockery of. The only thing to be done is a spending and salary cap, both of which will never happen.

“What’s to stop chelsea just as city have done signing a 300 million deal with let’s say abromovitch oil ltd or the like to sponsor the toilets.” UEFA. All commercial deals will be taken at the market level. If Abramovich gives Chelsea 300 million through some sponsorship deal, UEFA will calculate a fair value for Chelsea’s sponsorship and deduct the extra – Abramovich will not be able to pump in money. Granted the market level will be tough to objectively determine, but they will definitely not allow any extreme deals. UEFA and Platini have their reputations riding on the FFP.… Read more »

The fact is FFP will work because the real big clubs though out Europe want it to work and yes the likes of man city, Chelsea and PSG are not the super clubs of uafa. They are only johnny come lately clubs.

It will be interesting to see. German football is way ahead of us in terms of ensuring clubs are run responsibly. Can’t remember the precise details, but there was something brought in a while ago to prevent escalating debts for clubs. There was then a particular way of flouting the rules which basically involved catering companies paying a fee to clubs in order to tender for the catering contracts (this was allowable). Clubs stretched this to the limit & people with slightly removed connections to clubs would set up ‘catering’ companies, which led to clubs receiving LOTS of fees from… Read more »

If given the choice of possible financial woes in a time of economic turmoil to win in 2013 or prudence until 2014, with FFP and new sponsor money rolling in to dominate for a decade, I’ll take the latter.

Optimally, we dominate *starting* this year, but you know…

Didn’t Arsene say in public that he absolutely didn’t want to sell the chinless cunt?
He is not in complete control of the “out” transfers it seems.

What is it about the word “spending” that made you think it might apply to selling players?

Rule no.1: Never trust Gazidis or the Board! And Arsene words we should always read between the lines.

Rule 2: Your sissy bitching is tired and boring. Go support Chelsea if you just want some sugar daddy to hand Wenger £200m every season and tell him to buy himself summink nice…

I would support Chelsea (for a short spell) if it meant Abramovich would give Wenger a £200m transfer kitty.

Shouldn’t have posted that. I feel dirty.

What do ducks smoke? . Quack

Good to hear we are doing well and the Boss in control of proceedings!

Wengers in charge of transfers…. Sitting on a pile of cash…. Gonna be fun reading Le Grover’s throw their toys out of the pram and collectively jump into the shallow end of the gene pool for a good ol’ Le Moan…

“”But how much is enough to outspend others who have seemingly limitless means?.””…………………no need to outspend,just keep all the top players.

There must be something dodgy with somebody buying and selling players at will.

This explains a lot…………………….
Is arsene wenger a gay
wiki.answers.com › … › Categories › Sports › Football – Soccer – Cached
Answer: No he is not gay, but he is bisexual he was open about it in an interview with BBC sport. He had a relationship stint with Robert Pires

Olympiacos preview and news turn-around up ‹ Arseblog … an Arsenal blog

[…] could have invested more heavily in the team this summer. Ivan was at pains to make it clear that Arsene Wenger is the one who dictates what’s spent on the squad but perhaps the fall in match day revenue should bring some pressure from above to […]

Nearly every other post above has completely avoided the main point of the blog: So after all these years, despite much debate amongst Gooners whether it is Wenger or the board, apparently the tightfistedness/lack of spending IS Wenger’s fault then and not the board’s?