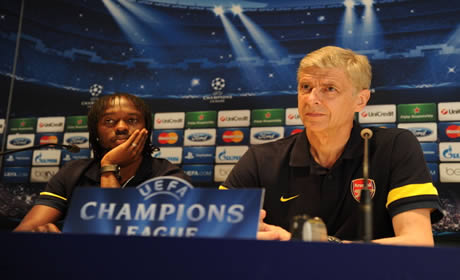 Arsene Wenger says that he’ll make changes for tomorrow night’s game against Montpellier in the Champions League but doesn’t want to upset the balance of his balance of his team.

Speaking at his pre-game press conference, the boss admitted players like Ramsey, Santos and Giroud could come into the team, but in no way was he underestimating the home side.  “I have made some changes,” he said, “but I want to maintain a degree of continuity for this match.

“I think that Montpellier have kept the same group of players – they have just been unlucky in certain matches and perhaps they were waiting for the Champions League.

“It is possible that they could cut loose against us, but that is the type of match you get used to in the Champions League.”

The Arsenal manager begins his three match ban and says it’s an irritation not to be able to manage his team from pitch level.

“I’m frustrated not to be on the bench because that is where I am happiest, but we have discussed the different scenarios and will see what happens tomorrow.

“Arsenal have never lost to a French team in France and we will try to maintain that run tomorrow.”

COYG = Come On You Giroud!!

Or just ….come on you gooner…… He’s a afterall a gooner eh?

So you left out le coq, come on the guy needs more action. A perfect stage for him to finally fill up nicely there behind giroud.

He’ll do a good job than song I believe.

I hope they all start to be honest, all the squad players have not had much of a run out lately. Arshavin/Ramsey/Coq/Koscielny/Djourou/Santos/Walcott/Yannaris. Id love to see Chamakh even get some game time, because we will need him at some point this season.

Its not that i want to take Montpellier lightly, i just think our squad players are more than capable of starting the campaign with 3 points in the CL, and then they will be able to get another game same time next week in the cup. Would do everyone wonders.

Arshavin wont start as I understand he is still in London. I just hope we have a good performance and result whoever represents The Arsenal.

Nah. Leave Walcott out. Stalling over 75k/week offer on the table? Fucking disgraceful. You’re not that good Theo,..

Or just let him off to Liverpool and mid table mediocrity if he prefers.
.

Why is Wenger banned again? UEFA are such cunts, they really need to rethink their priorities in terms of fines and bans (*cough* racism *cough*)

I think it’s because he stepped on michel plattinis’ shoe.

Cunts could ban him for that and let fc porto walk for racism.

Arsène followed the rules set out by EUFA but then said they had made a mistake in saying he could contact the bench on his mobile phone. They still banned him even though they fucked up!

Its called incompetence and in any other organisation the person/people who made such a cock up would have been sacked. These cunts probably got promoted for their ineptitude.

don’t worry monseuir Wenger, Englishman will do you proud.

The bould and the beautiful!

One thing is for sure…..the bould rarely gets this question

“Sir, can I please touch your hair?”

The Bald and the Beautiful.

I’ve never understood why people on here dislike cunts so much. Some of my happiest times have been spent with them.

Cygans BBL? even under a new username, I know its you. C l f.

Too late. But nice.

Hay, at least you tried.

Glad he’s going to rotate, its the perfect opportunity ahead of the Citeh game

if it has to be done, better get over and done with it early….

Ramsey defo should start then diaby to come in if need be or not at all….i wanna keep him cottoned for the citeh game. Giroud upfront, gervinho on the left then walcott for the right wing. Coq for arteta I think? then ofcourse santi to keep his place. Dont wanna be without the santi flair. Finally koss for bfg, he needs game time.

Then all that’s left is a pinch of COYG!

Giroud, Giroud you make me spew, we thought you’d score a goal or two, bet when you wear the red and white, it turns out you’re a load of shite.
Donkey.

Give the guy a chance, Henry didn’t become a legend overnight!

You made that rhyme to make us laugh, but instead you look like a complete ass. He’ll score in France on his old door mat, and you’ll look even more like a fucking twat

2 games start and a 15min sub and the chantings started!? F**K offf mate.. give him time!

Mate, it’s pretty obvious who the donkey here is…… YOU!.

You should be banned really for the homophobic name, above all else.

Homodisgustic, you learned a new word today Ryan. Isn’t this a gay moment? 🙂

Only you want to make it a gay moment.

Any Arsenal team will always win in France, because of our handsome players! ℓ‎=))ℓ‎​​​

Just joking, I have more confidence in this set of Arsenal players.

Makes sense to rest Diaby, but that’s pretty much it – otherwise I’d worry about disrupting our rhythm after such a good start. No point getting stung by hubris.

And Walcott can keep his impact-sub role until he signs a new contract.

If I were santos i’d have left for france earlier and make it to shopping around paris. Buy a teddy bear for me chubby myself, then look around for the finest hair gel for my buddy chamakh.

Good you’re not him

I use mousse, thank you!

Lots and lots of mousse.

And Abou for Captain!

You can’t drop a captain that easy my friend, especially at a champions league game so vermaelen will play, especially now that wenger’s sidelined the captains charisma has to be present. Plus you dropped arteta too, thats completely bonkers!.

Not a bad second team to have eh?!

I AM VITO MANNONE!

Now if only arshavin had travelled to france….then I definetly would have fallen for this line up.

Uefa’s vendetta against Arsene is ridiculous now, cant they use their time sorting out Milans swamp of a pitch, or the racist chants, or giving people confidence in FFP, or maybe goal-line technology?

Wonder if we should rest Santi for Citeh and play Ramsey in his position, not sure whether that’d be underestimating the oppositon but its an option

looks like le profs got a real selection headache on his shoulders, I guess thats what he gets paid for though

Its fun being able to talk about resting players and not be worried we’ll f it up somehow.

We must clasp our malevolent hands firmly around the supple neck of Montpellier and erotically asphyxiate them until they fall at The Loving Feet of Arsene Wenger.

I offer my humblest opinion.
It seems there are certain activities, of a personal bent, of which you have likely been lately deprived and which you need to pursue before returning to engage us with your comments.

Whatever team the boss plays should just go n tear montepellier apart and continue the good start to the season!

Cazorla and Arteta are 2 players we want to rest. and hopefully not need for the whole game. Diaby to come on for the last half an hour to have a run. Podolski and Chamberlain too need to be rested, but their not as fragile as as Arteta certainly.

Montpellier preview: a chance for change ‹ Arseblog … an Arsenal blog

[…] Arsene Wenger says he wants to maintain the ‘continuity’ of his team, tonight gives him a chance to juggle his squad around, sit back and see what Steve Bould does with […]