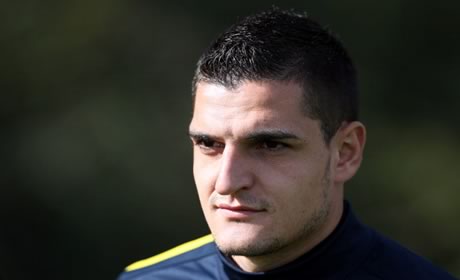 Wojciech Szczesny is out of tomorrow night’s Champions League game with Montpellier with what is being reported as an ankle injury.

He’ll be replaced by Vito Mannone and his absence comes just after the Pole was given the backing of his manager after a poor display against Southamton. At one point on Saturday his Italian counterpart was warming up on the sidelines so it seems likely there is an injury, which would also explain his kicking in the second half.

Mannone will be hoping to add to his clean sheet collection and, obviously, looking for a better time than on his last Champions League trip.

There was better news for Arsene Wenger though as Abou Diaby took a full part in training and should be available to play if selected. It’s a chance for Arsene Wenger to rotate his squad a little bit with the likes of Laurent Koscielny, Andre Santos, Aaron Ramsey and Theo Walcott all hoping to make a rare first team start.

Former Montpellier man Olivier Giroud returns to his old club and is tipped to start tomorrow night. How very football it would be for him to get off the mark on his old stomping ground.

For once I’m not worry about the replacement keeper!

Forgive me for my lack of grammar.

To be honest, Mannone looked VERY shaky and was terrible in the air. He had tremendous help from the back four. But im sure he can handle it. Hope Sczesney gets back to his best though, he was amazing and save our asses in the first half of last season.

Yes, I too would like to see him keep a corn sheet. Football needs variety.

There’s a kernel of truth in that.

the only sam is nelson
Reply to  arseblog

is all this rotating ‘keepers to sort the wheat from the chaff do we think?

Geez, I hope Don Vito will deal with the CORNers well..

Amazing. How quickly everyone’s popping with the corny jokes.

I’m A-MAIZE-D by all this mannone jokes.

When it comes to long shots, Manone is a cereal killer. He stops them dead.

The Loving Hands of Wenger
Reply to  arseblog

Too many puns. 5 match ban.

Blogs, you are not allowed to post reports for the next 5 UCL matches featuring Arsenal. You can let Tom write reports though.

Surely you mean a cannolo sheet?

this CORNdition damien martinez will be on the bench? So more changes to the squad.
Plus the youngster gets more experience. He might learn a few tricks in italian kung fu hustle

Did chamakh just get frimponged???

If Mannone is in the team for the next couple of weeks it will give me the opportunity to try and implement the Na Na Na Na Na Na Na Na Na Mannoneeeeeeee chant to the tune of the theme from the godfather which I’ve been singing to myself of late. Competition between the keepers is no bad thing for the team lets just hope Cheeky recovers and finds his form again. Love them both.

Guessing that will bother the Gooner community very little after the weekend’s fluff fest. Who’d have thought in a million years we’d ever wish for Vito to be guarding the sticks?! Fate has a funny way of twisting reality, that’s for sure.

This will be the ultimate test for manonne. I am sure he will do well but, we need to see consistency from him to prove that he is the second option.

Don Vito can stop a shot, he just needs to man up and boss the space in the air.

Quick recovery Szczesny!!! The depth in this squad is amazing!. If one is out, you can be confident the lad that will deputize him is as good as the lad out.!!!! COYG!!!

Is it too negative of me to hope Diaby gets saved for the game against City? I’d also like to see Ramsey get a run and Cazorla get a rest too.

I think he will be. I was more surprised to see Arshavin being left out presumably in favour of more Cazorla – you’d think maybe Wenger would want him completely fresh for City.

Then again, maybe Cazorla will be on the bench and the advanced mid position will be taken by Ox or Ramsey, that sounds more likely.

I shat a brick before Stoke but not today. It helps that the defence is protecting the GK better.

Doesn’t matter who we have in goal tomorrow night because with the likes of Vermaelen, Mertesacker, Koscielney, Gibbs and Jenkinson all guarding him we won’t have any problems against Montpellier who lost 3-1 at the weekend.
4-0 tomorrow night is my score line. Giroud will get off the mark and podolski will carry on scoring when he wants, scoring when he wannnnnnts, lukas podolski he scores when he wants.
Come on arsenal!!!!!!!!

For every news item that features Mannone, I feel compelled to watch this:

everything goes down the shitter for szcz since last season ended.
I hope he can recover and get back to his brilliant best!

I’m happy for Mannone. He deserves to start against Montpellier. The big question is whether or not Chez is really injured.

My name is CAZORLA
Reply to  arseblog

My surname is SANTI
Reply to  arseblog

Szcz doesn’t seem like the kind of guy to let one mistake shake his confidence. However, it would’ve been nice if he could’ve gotten back on the horse right away after falling off.

Stop the presses! Fatgooner is happy!

Is that 5 or 6 keeper out of 8 injured now. I guess Martinez will be travelling with the suad to France. God knows who will playing for the under 21s tonight. Under 18s finished without a keeper on the pitch against Norwich yesterday. Previously the 48 year-old youth goalkeeping coach was named on the bench for the NextGen game against Bordeaux. This is getting ridiculous.

I like the optimism that surrounds Arsenal right now, but sometimes i’m puzzled how quickly the perception of a player changes. I rate Mannone, i think he’s a good number 2 and I’m not afraid about him repleacing Szczesny again on tuesday. But I think in the long run he’s not good enough to be no. 1. He’s a good shot-stopper but he lacks the presence that f. ex. Szczesny has. His run of two clean sheets, that seems to have convinced a lot of people, didn’t convince me so much of the opposite. He wasn’t tested too much against… Read more »

I have always liked Mannone and when he’s hada chance he’s proved to be one hell of a shot stopper, I didn’t really understand the negativity towards him prior to this season. Szczesny is definitely number one but a part of me is glad that Vito is getting a huge opportunity to prove himself here.

Mannone deserves a chance in a big game like this so it’s not all doom and gloom, I just hope szczesny doesn’t become injury prone as he shined last season.

Martinez not eligible so Shea is on the bench.

Ah poor lad, hasn’t has the best history with injuries. Mannone will want to prove a massive point against Montpellier.

In fact, according to this link, Shea is playing:
http://www.arsenal.com/news/news-archive/arsenal-name-18-man-squad-for-monpellier-game

Although they’ve only got 17 players listed, so I’m guessing the missing name is Mannone!

No Arshavin on the list. I guess there is no point in me posting the suggestion that AA be given a center forward start in Montpellier.
Is he injured, dropped, or is Arsenal hoping he will not be ‘cup tied’ for January transfer business. I’m not sure how CL rules work exactly.

Ahh well, Hope Wojciech is back fit soon enough, seems slightly precautionary. Good luck Vito! Keep the clean sheets going pal. Trust me to have Verm, Gibbo and Wojciech in my Sun dream team….Lost me a few points other day with that flap…I am now 2 points off the top of the league of 43 players and 20 quid a head…Good start for the Arsenal and myself. Come on Giroud, lets have one off ya pal, get the pressure off you a bit…Bet he was gutted not to be on the park first half when they were flying in!!!….He will… Read more »

When Ches bungled for their goal it did look like he had collided with Jenks, or at least landed awkwardly. If the injury happened then it might explain his sudden attack of buttery fingers.

sorry, didn’t see your post. I just said pretty much the same thing but more long-winded. So yeah. What you said.

Szcz did go down holding his ankle immediately after he dropped the clanger on saturday so I’m assuming it came from that incident.
I guess he either jumped awkwardly (which could explain him dropping the ball through pain) or landed funny (he did seem to knock into Jenkinson as he came back down.

Both are the best choice,so quick recover for no 1

I’m absolutely chaff-ed by all this.

Chafed? You should try having a posh one Wale, treat yourself.

Manone looks like he would be on the front cover of an Animorph book turning into an eagle.

Hopefully Mannone tries to take his chance and also that means Szcz will have to up his game to make sure of his place as Number One.

Another clean sheet for Vito Mannone

The Loving Hands of Wenger

I know this sounds harsh but I prefer Vito to Szczesny.

Szczesny can be arrogant, his Tweets before the Carling Cup final dissing Ca$hley blew up in his face (as tempting as it must be to diss the ‘roach) and I just think Mannone is more humble and goes about his business in a calmer way right now.

Lets get behind Vito the team and keep our good spirits up as we win tomorrow and smash 17 past Man City on Sunday. I have to say City’s defence looks really crap at the moment which must be a positive for us.