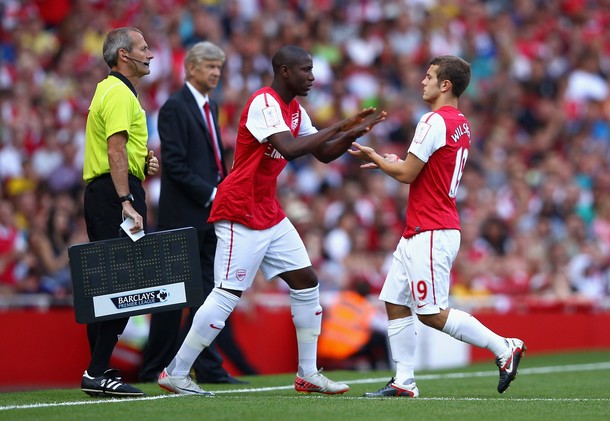 Arsene Wenger says that Jack Wilshere is very close to training with the Arsenal first team, although suggestions that he could re-join his teammates as soon as next week are wide of the mark.

The 20-year-old has now been out for over a year with an ankle problem and subsequent knee surgery, but after a summer of rehabilitation appears to finally be closing in on a much-anticipated Premier League return.

Giving an update on the midfielder’s progress ahead of Saturday’s match with Southampton, the boss spoke optimistically about his young charge’s immediate future:

“Wilshere is good news for us because he is making quick progress now. Next week? No. But he will join full training soon.”

Having revealed that Wojciech Szczesny would return this weekend and that Abou Diaby and Theo Walcott still have a chance to feature, Wenger also divulged good news about long-term absentee Bacary Sagna.

According to the Mirror’s John Cross, the boss stated that the French right-back would be back (presumably to training) in two to three weeks.

Having watched his injured defender give a somewhat inflammatory interview to L’Equipe last week, Wenger was also quizzed on whether or not he expected Sagna to stay at the club in the long-term.

Bacary loves the Club and I think he will stay here,” he made clear. “Bacary’s interview doesn’t reflect the love he has for this Club. He has always given full commitment.”

Given that the club themselves confirmed that Sagna was happy with the way his words were portrayed and that Wenger admitted a couple of weeks back that measuring the intensity of a player’s love for a club was impossible, Arseblog News can’t help but interpret this is a classic ‘nip it in the bud before dealing with it privately’ statement.

Can we just relax, wilshere is returning, rvp is starting his injury journey. I like the direction that this one is taking. I so like it.

Do you like the direction of relying on long term injured players making a smooth comeback?

Thats self inflicted woe – not a self sustained club.

Good luck to Jack, we have missed him but so much pressure on him already. Very rare for a player to come back straight to top form without niggles RE: Ramsey, Eduardo etc. Even Vermaelen took a while to get upto speed.

I like it better than the alternative policy of every time we have an injured player, we unilaterally cancel their contract and flog them as a free agent to Fleetwood FC (who obviously we be willing to buy anyone) and then sign up some other player no-one’s ever heard of but who is really good trust me for an £100k a week £40m fee to replace him and hope he isn’t crap/prone to injury… but even if this new player is crap/prone to injury, it doesn’t matter since we can just unilaterally cancel their contract and flog them to BATE… Read more »

That’s a classic Straw Man argument. Hudson Hornet was not saying, “OMFG WILSHERE’S INJURED SO WE SHOULD HAVE BOUGHT JADSON OR GANSO FOR 50M” What he’s saying is that it’s impossible to expect a young player who’s been out with injury for a long time to come back and slot into the first team squad straightaway, when the team has few replacements for some of its key players, like for example Arteta. Like for example Diaby. And thus we should’ve signed someone on loan, for example, to lessen the burden on them and keep the squad competitive while they can… Read more »

He clearly is saying that.

And if he isn’t, then all he’s doing is advocating what the club already does. So…

I am not encouraging bankruptcy via overspending. Even idiots can see we are miles away from such doomsday scenarios. This constant scaremongering is frankly absolute nonsense.

As prhyu mentioned we had options.

RVP is not injured. But I wish he were.

Actually he is now.
Yay.

Wilshere and Rosicky could not come back soon enough.

Can’t wait for the return of football this weekend.
I’ll have my weekly saturday pickup match, then watch the game against southhampton, then CL next week. good times…

I think Seb Coe should finally get the back room job at Arsenal he deserves.

just imagine if wilshere was a semi pro player and that all the resources that arsenal have was not available to him, how long do you think he would be out for ?

But seriously, I’m not a doctor, no idea whether it was time for the body to heal naturally that was needed or rather aggressive treatment.

Full training soon, but won’t be at his best earlier than 4-5 weeks.

I’d give him until January before even thinking of playing him a full ninety.

Good news for Wilshere, wellcome back to the first eleven. Man Xavi/ Iniesta knows how best you can do at the field. Good news that even Barca spoillers have recognize your tallent. Keep it up, Zinedine Carzola will teach you more about Xavi and become our hero.

That post started so well and then fell apart in the middle and the problems continued to the end.

Abu, mombasa…totally agree wit u jack is obviously goin to learn frm carzola as he did frm cesc!!!

COME BACK SOON AND SAFE.

Sir, your um….your caps lock seems to be stuck.

what the fuck is going on here?

Nothing will block Wilshere’s comeback. I know it. I think. I hope. Please, lord! *sinks to knees wails into hands*

I like how your optimism turned into hope rather than the other way around.

How about “the new king” Wilshere returns to end our trophy drought?

Mannone has had 3/3 clean sheets. Should he be replaced on Saturday?

Too Drunk To Be Offside
Reply to  Yeah right

Mannone has had 2/2 clean sheets and Yes

He didn’t play against Sunderland, so two clean sheets.

Wilshere is the british zidane

Why?
He’s not bald, hasn’t headbutted anyone and knows how not to spring an offside trap with every attempted through ball.

Can’t wait to have Jack back and I can’t wait for the interlull to be over!

I have watched the MOTD highlights of Arsenal v Pool 5 times just to get my Arsenal fix!

Anyone else imaging Wenger walking into the press conference like this: http://www.youtube.com/watch?v=1D1cap6yETA

I’m looking forward to seeing him play again, but realistically, we shouldn’t expect much from him this season. He’s been out of the game for over a year. This will be a season of re-acclimatizing to football, dealing with small setbacks, niggles, etc. I’d be very (pleasantly) surprised if he came back to his best before the end of the season.

Will be fantastic to see Jack back. But who gets dropped to accomadate him ? Our midfield has been superb, each and every one.

I’m thrilled that everything is moving along with JW10 but everything with him has to be tempered! We can’t rush him at all. I want him back in the line-up as a sub at first giving 15-20 minutes towards the end of games (not on shite pitches or against gorilla teams). Also the fans need to have very realistic expectations for him in terms of his performances. He’s been out over a year and won’t be at his best for at least a month+ (5-6 games at least).

The picture of Wilshere and Afobe?

Some say he has a problem with long balls.
To put it literally, coz he can’t see past the end of his nose.

I really hope he returns the same player as before. With the quality we have in midfield there isn’t too much pressure on him, so he should be able to get into the groove of things again. It’s just the players around him are completely different to those we had before he got injured, so some adjustments in his game may be needed.

I hope he can get match fit asap and shut the mancs up as im getting sick of being told cleverley is better….

on another unrelated note does anyone know if its hard to use someone elses membership card for entry to the ground???

Can’t wait to have him back in his new no10 shirt, it feels like forever since we’ve last seen him play. I still barely understand how hes suffered so many setbacks and weve seen probably 4 or 5 different months he was due back for us, even almost making it to a behind the scenes reserve match, god knows what thats done to his legs. So im still a bit skeptical of our staffs handling of his recovery but if he does make it we’ll have our future captain back so its all good!

Its interesting how everyone here still remembers the qualities of this young lad to AFC. Most of M̶̲̥̅γ̲̣̣̥ folks here thinks he has no place i̶̲̥̅̊n̶̲̥̅̊ the first XI, therefore ƗƗɐ had to sit out on the bench. I always tell such people to go back to Youtube. I mean this ωαѕ the bloke that outshone Xavi and Iniesta. I can’t remember anyone who could ḋø that, not even the Arsenal Cesc Fabregas