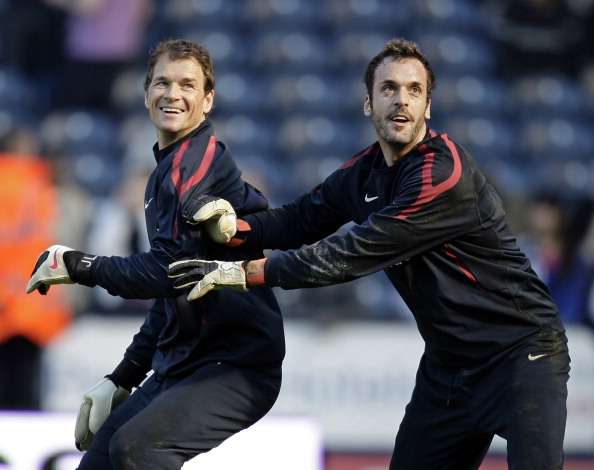 Having been demoted from first choice goalkeeper to number three in the blink of an eye, Manuel Almunia could easily have had a moan about his changed circumstances while on the books at Arsenal.

Instead, he kept his counsel, dabbled in a loan move to West Ham, saw out his contract and moved across the road to Watford in a deal devoid of fanfare and bitterness.He may not have been to everybody’s taste between the sticks, but he was at least professional.

Having been silent for so long it’s therefore interesting to hear what he has to say about his time at Arsenal and how he assesses the men who pushed past him in Arsene Wenger’s pecking order.

“It’s good to have a No 1 goalkeeper with the support of the coach, but at the same time the second choice has to be ready and has to be good,” he told The Times (Paywalled).

“All three have experience and ability so Arsenal should be happy. They’re all very similar. Szczesny is like me; tall, authoritative and good with his feet. (Arseblog News did chuckle a little at this point) Lukasz and Vito are more explosive and make more spectacular saves.”

While the Pole inherited the number one shirt from Almunia this summer, the elder statesman hinted that his successor, while a very good goalkeeper, still had some maturing to do off the pitch.

Having been on the receiving end of Jens Lehmann’s teutonic temper on the training ground for six years, Almunia confirmed that he and the big German had finally buried the hatchet after a long-running feud.

“As everyone knows we had a difficult relationship for years, but Jens is a lovely person off the pitch.

“In his last season at Arsenal there was a team dinner for us all to say goodbye. Jens and me didn’t speak — and I mean never — but he came to me with his wife and showed me a totally different face. I thought, ‘oh my God, who is this? This is not Jens!’ We talked about life, football, Spain, Germany, everything.”

Finally, in a candid statement which might rile a few, the Spaniard also made no bones about the fact he would have left the Emirates earlier were it not for the lucrative terms of his contract.

“I went from being No 1 to No 3 almost overnight, but I tried not to think about it. Maybe I should have left one year earlier, but I had a contract that was too good to refuse.”

” I went from being No 1 to No 3 almost
overnight, but I tried not to think about it.”.

Just processed this and I loled. Poor almunia.

These kind of comments are really boring now.

Agreed. I’m still a cunt though.

Can’t see who it would rile….if you had a contract with your employer, and you got demoted, but still retained your wage…wouldn’t you at least ride it out if no better offer came in? Of course you would.

It doesn’t rile me neither.
But at the same time neither does offering Theo £75k a week or whatever he wants instead of losing him on a free, but that’s just me!

“By the power invested in me, I now pronounce you almunia: absolute shit. You may now fuck off to watford.”

Arsene has more class than that.

Almunia’s about as authoritive as a weed, and he looks like he smokes enough of it

Was excellent on his day, yet diabolical on too many an occassion. Never mind. Good luck Manuel!

finally a player that openly states money was the deciding factor. no bad feelings for the guy though

He wasn’t going to get any better money from anywhere else, and for some people the money they’re making can be more important than their playing time, ESPECIALLY if you’re nearing RETIREMENT.

Young, 20-somethings wouldn’t mind playing for lower wages because they still have apx. 10 years left in their playing career. At 30 you’ll be lucky to have an upgraded wage, unless you’re people like Pirlo, Buffon and Xavi.

After messi lobbing him in the champions league, almunia should have followed him as he headed for the celebration and kicked him in the face. Then he probably would have been my legend.

If that happened we will need a golden statue of Almunia kicking Messi in the face..

Can’t knock him for sitting there pocketing the cash. After all, he didn’t decide how much he was gonna pay himself.

I’d do likewise, but then again I am what’s known as a lazy twat.

I think you can’t ask the players to be honest and then be angry when they are, so I applaud Almunia for his honesty. It’s a welcome contrast to all the little boys and people who prefer the atmosphere at the etihad

I can’t remember totally, but I believe it was Adebayor or Drogba, one of those two I am almost certain didn’t lie when asked about money, the man replied “as African players, we work our socks off to get to the top, we want to make as much money as possible because we don’t have it growing up, this is a very short career so I will go wherever the money is highest for me so that my extended family and I will live like kings and I can help my people, we Africans are all like this” Now, the… Read more »

I doubt Adebayor said anything resembling “I work my socks off”.

Assou Ekotto said the something really similar to that as well….

I never laughed as hard whilst reading an Arseblog News article before. Even the Onion doesn’t make me laugh out loud in real life.

A contract too good to turn down…..Denilson, Bendtner and Chamakh are counting their lolly too.

“I thought, ‘oh my God, who is this? This is not Jens!’”
Brilliant! I can just imagine it.

I remember Dara O Brain on an Arsecast a couple of years ago talk about Almunia whilst he was in poor form. Dara said that Almunia was so slow to get down to the ground to stop shots, it was as though he was made from some light metal, or Almunite.

You can’t blame the guy, he was making good money and he knew he was really famous for being shit and would never get that kind of money again in his life. He should never have been at the club for as long as he was though, Sylvestre and Squillachi are another couple of recent Wenger mind farts that nobody can explain. We all know the wage structure needs to change and now we have an ex player confirming what we all suspected. Best of luck Almunia, he ate a lot of shit from the fans over the years, he… Read more »

The two worlds best have all enjoyed almunias time on arsenals goal.

Ronaldo at united with his freekicks-Almunia with half an eye on most of them.
Messi- seeing almunia on goal just motivated him to score abit more.
He’ll retire knowing he’s mixed it up with the best. Almunia. You silver.

He also did well once at OT. Unbeatable on his day, utter shit on others.

Also heard frimmers nearly engaged wilshere in a tackle apparently coz of the no.10 jersey he had on. Also wilshere’s rusty hair didn’t help matters. Relax frimmers, rvp cunt is gone. He wears 20 now and is in some shit city with other cunts. Table cloth jersey?, yes frimmers him. Now wait…..just wait.

[…] keeping for npower Championship side Watford, Almunia has given his take on Arsenal’s present crop of goalies, as well as chipping a few words about his time with Lehmann. Almunia believes that all three […]

Jack’s back while Manuel speaks well ‹ Arseblog … an Arsenal blog

[…] and pieces will emerge as the day goes on, there will be a press conference later), there were some interesting quotes from Manuel Almunia in the Times yesterday. He talked about his curious relationship with Jens Lehmann which was […]

Some Arsenal fans really annoy me. Credit where credits due, he was the motm against united in the semi of CL at Old Trafford. He seemed a gentleman throughout and even through all the shit, he never caused friction. Sadly he just wasn’t good enough, but at least he tried and most importantly he wore the badge with pride. Thank you Almunia.

Yeah sure he may of done fine against Utd which we lost home and away, but he also slipped up to stop us winning our first CL in 2006 vs Barcelona. How can you concede twice in the final 10 minutes when you can do fine the rest of the match?

I blame Cashly fucking cole, flamini should never of being dropped

what about his wonder save against eto’o in that match? barca’s first goal was offside aswell.

i love his honesty about money,nt those having problems with playing position and directions of the clubs..little boys