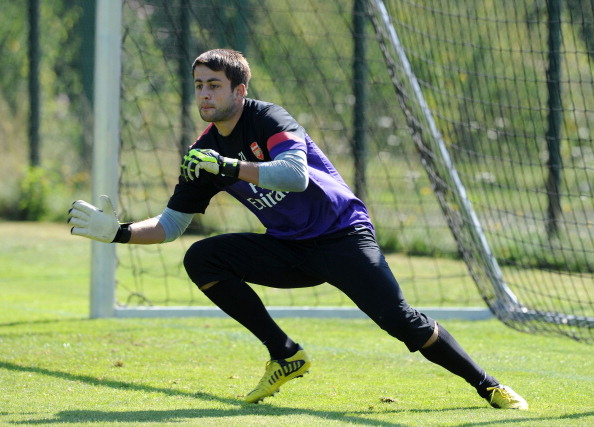 Arseblog News has been informed by Arsenal that Lukas Fabianski has suffered an injury setback and is being assessed by the club’s medical team.

Reports have been circulating that the Gunners’ second choice goalkeeper, who has been out since September with a shoulder problem, has damaged ankle ligaments at London Colney while stepping up his rehabilitation.

The Pole, who hasn’t played for the first team since Arsenal lost to Manchester City in pre-season, has suffered a catalogue of injuries over the last two seasons and subsequently missed out on the chance to become Arsene Wenger’s no.1.

Speaking this afternoon a club spokesman informed us that no timescale had yet been placed on Fabianski’s return:

“Our medical team have advised that Lukasz is currently being assessed, but there’s no confirmation on timescales as yet.

“The manager will be speaking to Arsenal.com in the morning, so there should be some further news then all being well.”

Given compatriot Wojciech Szczesny’s own injury travails (stuck as he is in the Abou Diaby ‘two-to-three week’ time-space continuum) it looks as though Don Vito will be our first choice keeper for the time being.

While that in itself is not a worrying situation, the fact that our back-up keepers, Damien Martinez and James Shea, have barely played any first team football does highlight a potential problem should the Italian also get injured.

See him getting sold next summer, have fun in the reserves for the rest of this season.

I see someone has learnt fuck all from the Diaby/Rosicky sagas.

When diaby and rosicksy joined they were great talents until they got chronic injurys, fabianskis best talent is waving his hands in the air when a corner comes in before the opponant inevitably scores. He has never proven himself at a top level, I can remember so many games that fabianskis lost us, braga, Olympiacos, Blackburn, Wigan, bOlton the list goes on

Johan is a decent defender
Reply to  THEREISBEARCUM

And you can’t remember the ones he won us when his form picked up like Wolves away?

Before his injury he was getting better and better, it’s a shame people choose not to remember this.

What exactly is to be learnt from “the Diaby/Rosicky sagas?”

Diaby looked good for 5-6 games this season. Then got injured again.

This all sounds very almunia familiar. mysterious injuries in the last year of your contract leading to delisting in january? and a bosman in may.

maybe its me but whenever I hear something about fabianski, he’s injured. last season, this season, internationals…

It’s 2010-2011 all over again. Jens is already doing his badges at Arsenal so he might as well be ready just in case anything happens to Mannone…

If Shea or Martinez have to come in so be it, thats our luck, who would have thought all 4 full backs would be injured at the same time last season. We will cope and learn a lot about our squad

How his injury even happened i’ll never know. When was he even injured, and what type of injur was it?. This fabianski lay off is so fucking mysterious to me. But like all us gunners I hope he survives so that we can get good price!

Presumably, he kicked a goal post a bit too hard when the boss confirmed to him that he’s now our third choice keeper.

I moustache you a question. May eyebrow your coat?

I want Szczesny back, enough of Don Vito.

I think all of our 3 keepers are excellent shot stoppers but all have a big mistake in them and thats worrying!

Mate even the.best keepers have mistakes in them how about seaman against nayim and for england against ronaldinho. more up to date what about loris signing for spurs……biggest mistake of his life!

Disagree dude Nayim…a freak…ronahdinho a fluke/ piece of magic that few keepers wouldve stopped. I agree he had his moments but those you mention, particularly the one against Brazil when the media were on a hunt to get him out of the No 1 position. And he’s an F’n LEGEND!

@TomJ I have to disagree. Nayim spotted Seaman off his line, went for the lob and got it. It was a portent of things to come. Seaman was a ‘keeper who liked to play forward, dominate the area and give himself better options to close threats down. This worked very well for most of his career. It all went Pete Tong when he lost the athletic ability to get back onto his line like a scalded cat when required. After the Nayim and Ronaldinho goals, everyone got the message that he was vulnerable to being lobbed and the writing was… Read more »

99 times out of 100 neither Nayim or Ronaldinhos effort wouldnt have found the net. Nayims was a pot shot from the halfway line, R’s a cross. Now remind us of all the other times he was caught off his line?

Also Seaman was 32 in that CWC final,hardly old for a keeper

Johan is a decent defender

Bring on Martinez, heard he is the real deal although he doesn’t qualify for Champions League yet.

ETID
Reply to  Johan is a decent defender

Johan is a decent defender
Reply to  ETID

Can clubs delist before January? Because he will qualify by January anyway.

We need all our keeper to be fit and injury free. Hope no more injury for my darling team

Funny how fabianski looks now the more dispendable of our keepers. This time last year I couldn’t wait for us to get rid of Mannone, everything was building up quite nicely to his inevitable departure. Loan at hull, never really establishing himself at his time there. So on so forth. I thought yap, this is definetly the guy to leave us. Months later he’s become more dependable than I would have ever imagined. Again the transition with our defenders, per seems to be my automatic starter now….but the thought of this ever happening a few months before today was absolute… Read more »

I am not that worried about the loss of Fabianski, but I do agree that what is worrying is the lack of backup IF Mannone gets injured.

Me want to go fishing…Mmm

[…] feared Lukasz Fabianski could miss months after suffering an ankle injury in training. Although it’s still being assessed the suggestion is it’s a ligament problem which could sideline him for quite a while. […]