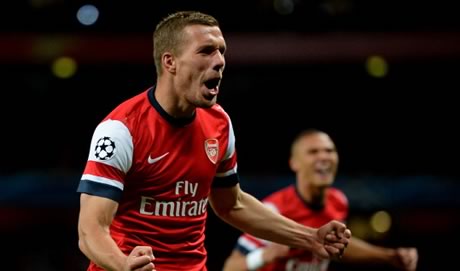 Steve Bould has admitted that tonight’s 3-1 win over Olympiacos was difficult and the first half sloppiness was something of a consequence of the Chelsea defeat the weekend.

The stand-in boss had a bit to say afterwards, and here it is.

It was tough. They made it really tough for us and defended really well. We started not too badly, but then looked nervous. Overall, though, it was a fantastic result. It’s always that isn’t it? It’s a results industry, we ground it out and got that.

They are technically a very sound side, we knew that before the match and we found it out in the first half. I don’t think they had too many chances, we limited them and could perhaps have score a few more, without being fantastic. We changed things around a bit at half-time and that helped us to control possession. It’s early days and there are a lot of quality teams but we are in a good position in the group.

Good players can play anywhere and Gervinho is one of those – whether it’s right wing, left wing or centre forward. He’s scoring goals and his confidence is sky high. I think his link play is gradually improving, and he’s a danger with his pace and movement. There is a lot more to come from him; he could be a top player.

On whether there was a hangover from Chelsea game which affected Arsenal in the first half.

I think there was. It probably knocked our confidence to lose to Chelsea. Now we can get back on track.

Now sit down with Mr. Vermaelen and discuss those forward runs please Bouldy. Scare the shit out of him.

Seriously. Is something wrong with Mertesacker we’re not aware of???

I would say that we are saving The Sack for Sam Allerdyces awesome tactical display on the weekend mate.

Bouldy also needs to tell Vermaelen about the effects water can have on smooth surfaces.

If you try to swing on the cross bar when its pelting down rain, your gonna have a bad time.

hehe! Saw that again in the highlights….fucking hilarious…

It is what it is
Reply to  Goontang

Like the scarecrow……Bould should expose him to some hallucinogen nerve gas and just stare and snarl.

One death stare in the lockerooms was all it took and bam, second half we were again ourselves defensively.

I think death stare is his default. Darth Bould, I call him.

Does that make Wenger the Emperor 😉

wasnt really impressed with the team performance esp in d first half,but loved the way they were able to grind out the result.
very happy with ramseys goal. next stop its hammer time for the hammers
COYG!!!!

Hate to be “that guy” but those sloppy passes which we made a lot of today in defence and defensive midfield have got to stop. Against a good premier league side those would lead to goals 9 times out of 10. Stuff like that costs us matches.

Gervinho looked keen again, didn’t he? He was really buzzing about and doing good things, rewarded with a goal. He looked disappointed to be subbed.

Wonder who Wenger will select at centre forward for West Ham. I feel the dam is about to break for Giroud.

Give ppl a little rope. Kos with Verm, in two games have gone from bein Arsenal’s best def pairing to the worst in def. Yes Kos had a shocker against Chelsea, but lets not jump around to conclusions after just one or two performances.

I think all three of our defenders are great, and as good as gibbs has been, I truly believe Verm needs to move left, with Per and Kos partnering in middle.

Great result and in a game like that it’s all that really matters. Glad we bounced back after the unimpressive game against an unimpressive Chelsea. I really hoped for Giroud to get a start and bag a goal or two to start his cylinders firing. I love when Podolski scores because he always celebrates like it’s his first. That man was such a great signing. Gervinho’s strike was well placed and a good goal.. if only they hadn’t fallen asleep immediately afterward on defense but in all credit Mitroglou’s goal was top class. Rambo getting the third goal and replacing… Read more »

Forgot to add…. watch Benzema’s goal if you haven’t seen it! Perfect cross from Kaka’ for a brilliant overhead kick from the Benz